Rapid growth in space communication technology and radio waves system has led the global space agencies to launch more satellites to collect and transmit important data. High economic costs of the construction and launch of spacecraft have raised the demand for smaller and light weighted vehicles that can easily orbit outer space. Small miniature satellites are also more useful than the larger ones for gathering meaningful information and radio relay. They can be easily handled and are beneficial for the sustainable use and exploitation of space. Satellite programmers are thus developing open source, flexible, microsatellite platforms and other future space-based systems.

Technological advancements in the field will enable space organizations to harness the cross-cutting potential of the next-generation, affordable, nano, and microsatellite platforms. Many developed as and developing countries are contributing their best to offer cutting edge technology-based high-end nano and microsatellites to cover a varied range of geospatial and other space-related studies. Governments across the globe are allocating budgets, whereas private firms are collaborating to make successful multispectral remote-sensing microsatellite launches in the forthcoming years. 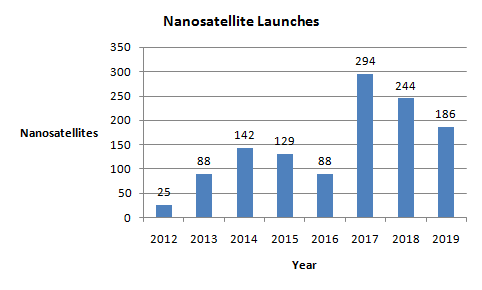 Nanosatellite and Microsatellite — A Brief History of Development and Launches

The Stanford University's Space System Development Laboratory is associated with the development of the Orbiting Picosatellite Automatic Launcher (OPAL) microsatellite since 1995. The California Polytechnic State University and Stanford University together proposed CubeSat, a miniature satellite for space research in 1999. The spacecraft was similar to Sputnik in design, build, and operation. The first CubeSat was launched in 2003, and by 2012, there were 75 CubeSats orbiting the space.

The early micro and Picosatellite were a bit complex and required a lot of manual intervention to be operated efficiently. Many needed to be re-designed. SSDL’s CubeSat was ten-centimetre cube with ten popular pusher-plate concepts, which was first introduced at the Japan–U.S. Science, Technology, and Space Applications Program (JUSTSAP) conference in November 1999. Since then, many other modified cube-like Nanosatellite has been developed that is larger than the CubeSat.

NASA introduced its first fully automated, biological spaceflight GeneSat-1, also known as the first U.S. launched CubeSat. Consequently, two 6U Perseus-M CubeSats were launched for maritime surveillance in 2014. The InSight lander was launched to Mars in 2018 that included two 6U CubeSats called Mars Cube One (MarCO)

Increased interest and involvement by the civil, defense, and intelligence sectors is significantly driving the development of nano and microsatellites across the world. Diverse applications and increased use in future science, earth observation, and reconnaissance missions have further incremented market demand. Research centers are demanding small size satellites of masses between 1 kg and 50 kg for ease of operations. The SpaceWorks Satellite Launch Demand Database (LDDB), reveals that there are currently 377 known future nano or microsatellites of 1–50 kg and 47 known future Picosatellite.

Requirements of high infrastructures and high altitude platforms by wireless terrestrial systems can be a major restraining factor to the market growth. However, introduction of 5G, low data rate communications, and testing or qualifying of new hardware before use to provide a stable base for the development and launch of such satellites in the near future is expected to provide the added impetus. Government initiatives and investor funding are anticipated to encourage satellite launch industry to operate more small satellites such as Demeter, Essaim, Parasol, Picard, MICROSCOPE, TARANIS, ELISA, SSOT, SMART-1, Spirale-A and -B, and Starlink.

Commercial Sector is Anticipated to Witness Strong Demand in the Market

Increasing demand for real-time data and distribution at affordable prices is raising the demand for nano and microsatellites in the commercial sector.  Military sectors are also demanding miniature satellites for internet communication, video chatting, and other relevant data transfers. Manufacturers are largely focusing on developing 1 Kg to 10 Kg Nanosatellite and 11 Kg to 100 Kg microsatellites. They are also investing in X-band, K-band, and Ka-band satellites to offer the best services to space research organizations. These spacecraft are largely in demand for observation and remote sensing, biological experiment, academic training, mapping, and navigation. Infrastructure development and advancements in high-speed data transfer and communication are anticipated to bolster the market growth.

North America is expected to dominate the nanosatellite and microsatellite market during the forecast period. Presence of space organizations such as NASA and research laboratories is creating huge demand for miniature navigation satellites. The region is also an early adopter of new technologies, which is expected to have a positive impact on the regional market. Large number of space missions and microsatellite projects by the U.S. and Canada is foreseen as an added stimulus to the market growth.

Manufactures in Europe are focusing on designing small scale miniature satellites to minimize overall costs. Government initiatives and investor funding to carry on space exploration programs, and other civil and military programs are further propelling the market growth. The Nanosatellite segment is anticipated to project an increasing demand in the upcoming years. Presence of key operators such as the Surrey Satellite Technology LTD., Planet Labs Inc., Airbus Defence and Space, Lockheed Martin Corporation, and Harris Corporation is accelerating the development of miniature devices in the region.

Nanosatellite and Microsatellites Market in Asia-Pacific

Rising semiconductors, RADAR, and speed communication technologies in Asia-Pacific is actuating the growth of nanosatellite and microsatellites in recent years. Strong government encouragement in the field of nanotechnology in countries such as China, India, Japan, Korea, and Taiwan is driving the market. Similarly, increasing applications in nanotech and space technology is boosting the planning of satellite technologies and infrastructure in the region. The government of China has allocated about USD 300 million for Nanotechnology for a period of 5 years. TsingHua University and Beijing University are also contributing their shares in the field, further driving the market growth.

Peru to be the Center of Space Programs

Expansion of the South American space programs in recent years, especially in countries such as Bolivia and Peru, is anticipated to register some successful launches of space satellites in the upcoming years. Destruction of 2015 Mexican satellite aboard a Russian rocket has forced the government and organizations to allocate extended budgets for the development of high-end Pico and nanosatellites.

In 2016, Peru’s high-resolution Earth observation satellite, Peru-Sat1, was constructed by Airbus Defence and Space and launched from French Guiana. Bolivia’s new telecommunications satellite, Tupac Katari (TK-1), was constructed by China and launched in 2013. The Bolivian space agency is determined to provide citizens with telecommunications and media services.  In 2014, Colombia launched its domestically-manufactured satellite UAPSAT from Wallops Island, Virginia. The data mentioned above reveals that the South American agencies have strengthened their manufacturing platforms over the years and is expected to do so during the forecast period

Countries such as the UAE and Saudi Arabia are investing in the space sector intending to diversify their oil economies. Space enthusiasts in the region planned a world space week in 2019 to set milestones in space science. Rapid advancements in mathematics, engineering, and technology are likely to bolster market growth. Uganda, in Africa, is emerging as an ideal site for the launch of microsatellites into geostationary orbits. Kenya is also set to enhance its space programs to contribute to the regional market in the upcoming years.

What is the key factor driving Nanosatellite and Microsatellite Market?

Increasing demand for real-time data and distribution at affordable prices, an increasing the number of navigations projects and space missions are the key factors expected to drive Nanosatellite and Microsatellite Market during the forecast period.

Who are the active players in Nanosatellite and Microsatellite Market?

Which region is expected to hold the highest market share in the Nanosatellite and Microsatellite Market?

North America is expected to hold the highest market share in Nanosatellite and Microsatellite Market.

Which is the leading segment in the Nanosatellite and Microsatellite Market?

Commercial Application Segment is expected to be a leading segment in Nanosatellite and Microsatellite Market during the forecast period.