A solar cable refers to an interconnection cable, which is utilized in the photovoltaic power generation industry for interconnecting solar panels and electrical components. Some of the properties of these cables include easy installation, UV and weather resistance, lifetime reliability, flexibility, outdoor durability, and scriptability, which make them an ideal solution for various industrial applications. These cables carry high flux, making them ideal for residential uses.

Solar cables have mineral oil, ammonia, acid, and alkaline resistance and find application in hazard explosion areas in various industry sectors. It is also flame-retardant and fully recyclable as per the environmental regulations that make solar cables eco-friendly. Therefore, increasing the use of solar cables in a wide variety of applications due to their excellent properties drives the growth of the solar cables market during the forecast period. However, fluctuating raw material costs, such as that of copper, might hamper the growth of the industry in the coming years.

The surging levels of pollution due to urbanization and industrialization and the growing population have compelled the governments to undertaking steps in order to generate electricity by a carbon-free source. Furthermore, a rush to meet the set targets regarding zero greenhouse gas (GHG) emissions by the countries and increasing use of renewable energy sources for electricity generation drive the market growth. For instance, Under the National Integrated Energy and Climate Plan, Spain made a target of installing 120 GW of renewable energy capacity, solar and wind, by 2030.

Additionally, Australia's renewable energy target (RET), a federal government policy, mentioned that it is aiming to generate a minimum of 33,000 GW of the total electricity from renewable sources by 2020. Similarly, Canada also set a target for itself of raising the share of zero-emitting renewable sources from approximately 80% in 2016 to 90% by 2030. Therefore, these policies and targets implemented for reducing carbon emissions are increasing the demand for solar cables.

Growing Solar Industry across the Globe

The global solar cable market is predicted to grow at a rapid rate during the forecast period, owing to the growing solar industry in various regions. Solar is often preferred over other renewable sources as it is an affordable source of electricity and helps to reduce energy bills as well. As per the data released by Solar Power Europe, the Solar sector alone reached a total share of 12.1% in the global total power output in the year 2017.

In addition to this, it deployed twice as much capacity as its renewables peer, wind power, in that year.It also outperformed traditional energy generation technologies, with almost three times as much solar compared to gas and coal, and around a factor of nine times more than nuclear additions. The below figure shows the total net power generating capacity added in the year 2017 in the different renewable sectors. As per the below figure, solar is the fastest-growing power generation source, with 98GW power generating capacity in 2017, followed by the wind source. 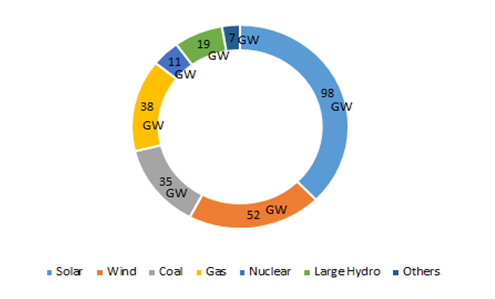 Fluctuating in the Raw Material Prices

The volatility in the prices of raw materials used in making cables, such as copper, may act as a restraint to the market growth. Some of the regions have an abundance of this raw material, while other regions solely rely on the imports from the countries. Therefore, this difference in the availability of materials leads to a surplus or deficit in specific regions. which is the main cause for price fluctuations, further hampering the market growth.

Asia-Pacific dominates the solar cable market during the forecast period due to the support and initiatives taken by the governments of various countries in the region. The initiatives such as the Make in India and Go Green policyare offering subsidies to the residential and commercial builders to adopt solar energy. As per the Indian Electrical Equipment Industry Mission Plan 2012–2022, the government of India has planned to make the country one of the important electrical equipment producers across the globe and obtain a productivity of USD 100 billion.

The growing power distribution sector, especially power generation from renewable energy sources, and the demand from the automotive and non-automotive industries are other factors positively influencing the market growth. Furthermore, the aggressive investments made in the renewable energy sector is accelerating the demand for solar cables. According to the statistics released by the Department for Promotion of Industry and Internal Trade (DPIIT), more than USD 42 billion has been invested in India’s renewable energy sector since 2014 and new investment in clean energy in the country reached USD 11.1  billion in the year 2018.

Europe’s solar cable market is largely driven by the robust growth of the solar industry in the region. As per the data released by Solar Power Europe, the share of renewables rose to 32.3% of total EU electricity generation in 2018. Under this, solar, in particular, saw an impressive growth prospect, following a 36% increase in 2018. The solar installations rose to over 100% in 2019, reaching close to 17 GW, and meeting a critical milestone of 20 GW of annual installations in 2020. Spain is one of the leading nations in the solar market. Its market nearly tripled in 2017 due to the government support schemes and feed-in tariffs and larges scale investments.

What is the key factor driving Solar Cable Market?

Growing solar industry in various regions, growing power distribution sector, especially power generation from renewable energy sources, and the demand from the automotive and non-automotive industries are the key factors expected to drive Solar Cable Market during the forecast period.

Who are the active players in Solar Cable Market?

Which region is expected to hold the highest market share in the Solar Cable Market?

Which is the leading segment in the Solar Cable Market?

Industrial End-User Segment is expected to be the leading segment in Solar Cable Market during the forecast period.