Sorghum, also known as milo, finds application in several industries. It is used as food for human consumption, ethanol production, feed grain for livestock, pharmaceutical, alcoholic beverages, etc. In the past 50 years, the area used for cultivation of sorghum has increased 66% globally, and the yield has risen by 244 percent. Half of the sorghum produced is used for the feed of livestock, and the other half is used for human consumption and in other applications. According to the Foreign Agriculture Services, in 2017, the leading producers of sorghum around the globe were Mexico, U.S., Nigeria, and India.

From bakery to animal food and from chocolates to alcohol, sorghum syrups are imperative as they can efficiently be used as a sweetener. It can be derived in various forms like grain Sorghum, forage sorghum, biomass sorghum, and sweet sorghum. The market has been experiencing swift growth in the consumption of sorghum in the food and beverage and pharmaceutical sectors. Besides, sorghum is predominantly used in the animal feed, owing to its property of being an excellent source of dietary phospholipids. Increasing meat consumption in various regions of the world is further supporting the demand for sorghum syrup. According to the Australian Department of Agriculture, global meat consumption increased by 58% over the past 20 years and reached 360 million tons by 2018. From the year 1998 to 2018, China’s meat consumption increased by 72%, accounting for around 34% of the global consumption growth.

Extensive Application of Sorghum in Chocolates

The sorghum syrup is used extensively in the food and beverage industry in various forms. Right from the bakery and confectionery to alcohol to livestock feed, sorghum is used in a gamut of food product formulations. Sorghum syrup also finds application in chocolates as a gluten-free grain. In 2018, the net sales of Mars Wrigley Confectionery, Ferrero Group, and Mondelez International accounted for USD 18,000 million, USD 12,390 million, and USD 11,792 million, respectively. Considering the enormous sales of chocolate among the top few companies, the market is likely to witness potential growth opportunities. In 2019, Europe’s Food and Drink industry generated around USD 1,334.4 billion, bringing forth lucrative growth opportunities for the sorghum syrup market.

The Pharmaceutical’s Industry Uses Sorghum as a Replacement for Sugar

Sorghum syrup is used as a sweetener in medicines and drugs in the pharmaceutical industry as an alternative for sugar. Sugar is one of the most crucial ingredients in not just food but medicines as well. The price of sugar in the past five years has been soaring. The world trade in sugar is anticipated to decline almost by 5%, owing to reduced export availabilities in many sugar manufacturing countries. Considering the increasing global demands for sugar, international sugar prices are expected to remain high in the coming years. The low sugar cane availability and excessive sugar intake by several developing and developed countries is a primary attribute for the soaring demand. With such strong demand for sugar, the sorghum syrup is the best substitute to be used on medicines.

In the year 2017, Europe invested around USD 39765.44 million in R&D for the pharmaceutical industry. On the other hand, North America accounted for 48.1% of world pharmaceutical sales in comparison to 22.2% for Europe. According to data from IQVIA, the 64.1% of sales of new medicines launched were by the U.S. in the period 2012–2017.

Impact of COVID-19 on the Sorghum Syrup Market

The coronavirus pandemic has affected almost every sector and caused massive disruption in the supply chain. Companies have lowered production capacities due to the flattening demand curve. With Supply chains under stress, the transportation sector is facing a standstill, thereby hampering the demand for sorghum syrup market.

Use of Sorghum in Alcohol Beverages Drives the Market Demand

A whiskey connoisseur or someone with a celiac issue looking out for a gluten-free beer, sorghum is an ideal choice that has opened up opportunities for the manufacturers. Sorghum can be used as both grain and syrup and is being used by breweries to produce fermented beverages. The sorghum grain is predominantly used to make beer, and the syrup is used to produce distilled spirits. Apart from beer and whiskey, sorghum syrup is also extensively used in the making of vodka and other alcohol spirits like baijiu, which is a popular Chinese liquor. It exhibits versatile properties and is environmentally and economically favorable. Some example of sorghum-based alcohol is Red Bridge, which is a gluten-free full-bodied lager produced out of grain sorghum by the Anheauser-Busch in Kansas city, the U.S.

The trend in the Brewery Industry is bound to accelerate the sorghum syrup market growth. The increase in the demand for crafted beer amongst the millennials is more as compared to regular lagers, thereby increasing the demand for sorghum.

According to the Brewers Association, in 2018, the U.S market for crafted beer witnessed a growth rate of 4% by volume and contributed to 13.2% of the U.S. beer market by volume. 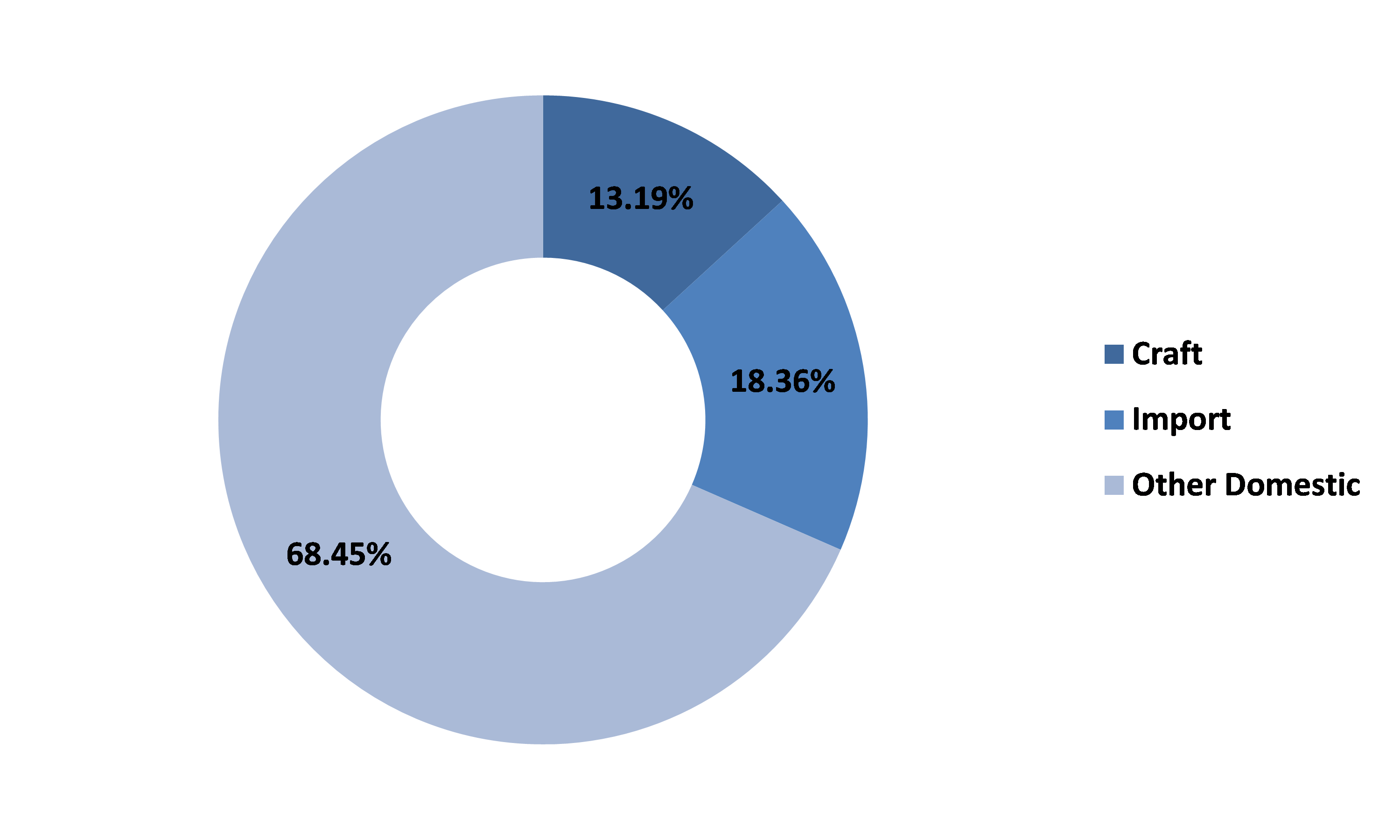 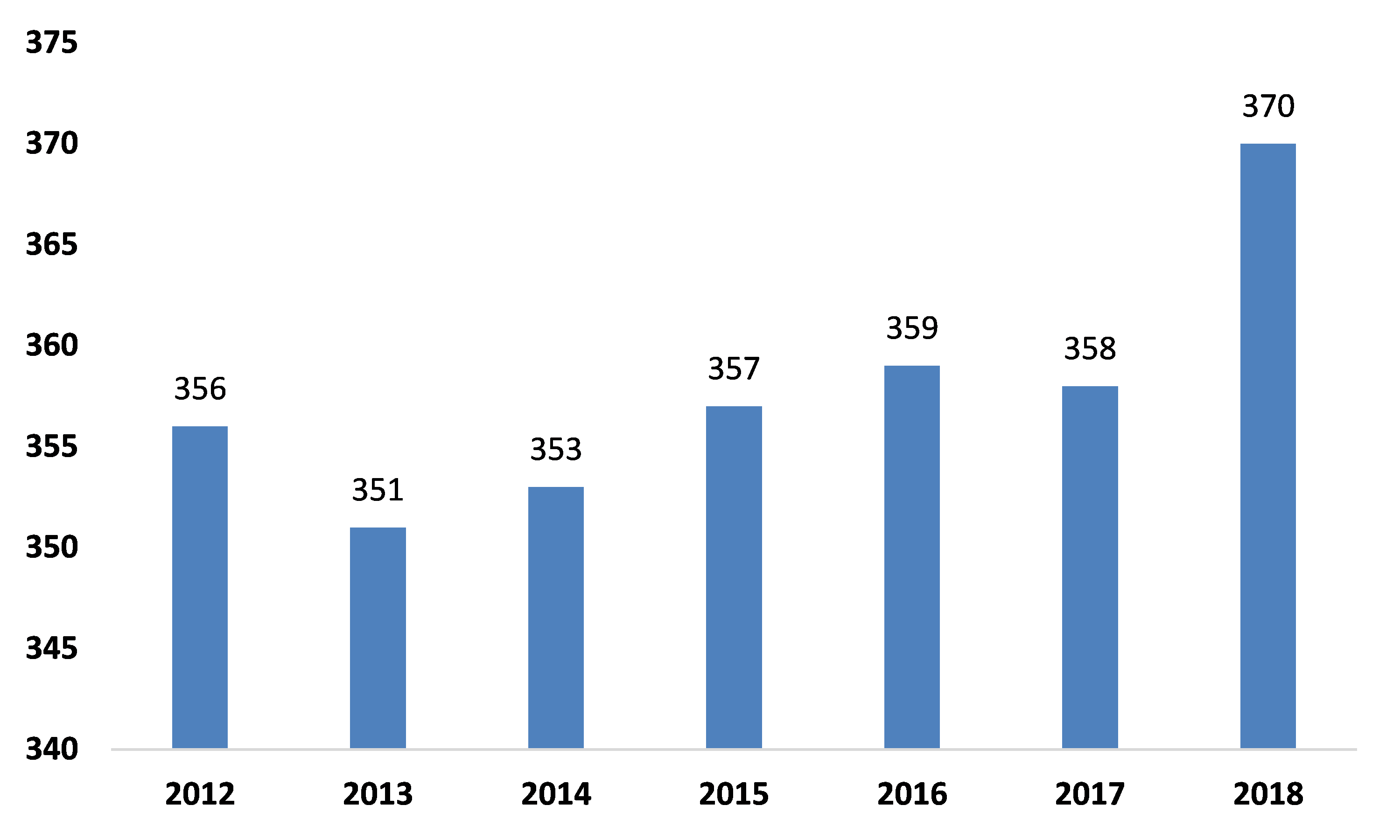 Texas and Kansas — The Leading Sorghum Cultivators in North America

According to National Agriculture Statistics Services, the U.S. grain sorghum production in the year 2017 accounted for 363.8 million bushels valued at almost USD 1.18 billion. In the U.S., sorghum is grown and cultivated across 15 states, where Texas and Kansas are the top two sorghum producing states. In the year 2017, the two states together accounted for 81% of total U.S. sorghum crop production. Texas cultivated 94.5 million bushels amounting to USD 341.3 million, and Kansas harvested 200.9 million bushels valued at USD 624.4 million as per the NASS data.

The U.S. is one of the largest exporters of sorghum in North America; the region exports around 6.04 million metric tons of sorghum a year. The robust pharmaceutical industry and the ever-growing breweries in North America are slated to increase the demand for sorghum syrup market.

By Percentage of Demand (%)

Which is the leading segment in the Sorghum Syrup Market?

Beverage Products Segment is expected to be the leading segment in Sorghum Syrup Market during the forecast period.

Who are the active players in Sorghum Syrup Market?

Which region is expected to hold the highest market share in the Sorghum Syrup Market?

What is the key factor driving Sorghum Syrup Market?

Growing demand for food and livestock feed is the key factor expected to drive Sorghum Syrup Market during the forecast period.