Steam Turbine Market: Information by Type (Condensing and Non-Condensing), Application (Industrial, Marine, Power Generation, and Other) and Geography — Forecast Till 2026

Since the past few years, governments around the globe have been channelizing efforts to reduce the carbon footprint of their power plants. Currently, power plants account for nearly one-third for total carbon dioxide emission in the world and thus, significantly contribute to the impending menace that is global warming. In light of this, a gradual shift has been observed from conventional power plants to combined cycle power plants, which in turn is imparting momentum to the demand for steam turbines. Combined cycle power plants require a steam turbine and a highly-efficient gas turbine to operate in synchronization so as to reduce carbon dioxide emission.

The global steam turbine market was valued at USD 12.05 billion in 2018 and is expected to reach a value of USD 14.9 billion with a CAGR of 3.1% during the forecast period, 2019–2026. Market growth can be attributed to the rising adoption of combined cycle power plants (CCPP) and increase in geothermal power generation.

The global steam turbine market can be segmented by type, application, and region.

Based on application, the market can be segmented into industrial, marine, power generation, and others. The power generation segment is a leading consumer of steam turbines, and this trend is expected to continue during the forecast period, 2019–2026. Power generation held approximately a 73% share of the global steam turbine market in 2018. The segment’s predominance can be attributed to the upward trend in electricity generation by thermal power utilities in recent times. They are suitable for large thermal power plants and are made in a variety of sizes up to 1.5 GW (2,000,000 hp) for electricity generation. According to the Indian government, thermal power utilities in India accounted for 943012.92 GWh of power generation during 2015–2016, which then increased by 5.43% in 2016–2017 to reach a value of 994215.33 GWh. 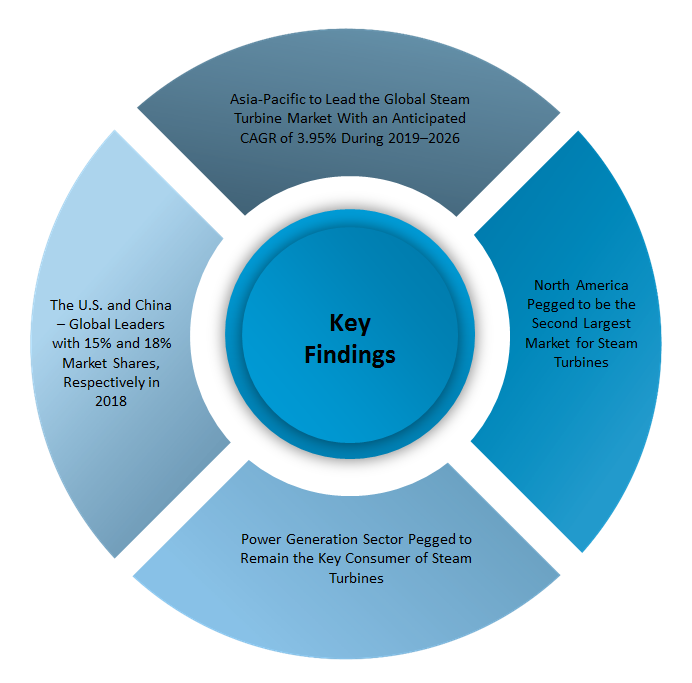 North America is expected to hold a significant share of the global market during the forecast period (2019–2026), owing to the rapidly growing electrical energy sector, especially in countries such as the U.S. and Canada. According to the Canadian National Energy Board (NEB), Canada mostly relies on clean hydro energy. For instance, in 2016, 648.2 TWH electricity was generated from the primary sources: hydro (62.4%), nuclear (15.5%), coal (9.45%), and natural gas (6.8%).

Europe is expected to hold a substantial share of the global steam turbine market during the forecast period, 201–2026. The gradual shift towards CHP (combined heat and power) and cogeneration-based power plants drives the steam turbine market in Europe. In September 2018, the European Commission permitted the German government’s plans to provide two combined heat and power (CHP) plants in the country.

The Asia Pacific steam turbine market is expected to grow with the highest CAGR of 3.9% during the forecast period (2019–2026), due to the region’s ever-growing ravenous demand for electricity. According to the India Brand Equity Foundation, India is estimated to have the fifth largest power generation capacity around the globe. In 2018, electricity production in India crossed 1,201.543 billion units (BU), and electricity demand in India is projected to triple by 2040.

Latine America is expected to hold a significant market share during the forecast period (2019–2025), owing to the growth of marine and oil and gas industries, especially in countries such as Brazil. For instance, in July 2018, Brazil’s oil and gas industry observed high growth, which, in turn, is projected to create around 500,000 new jobs by 2020.

The Middle and Africa region is expected to witness healthy growth during the forecast period, owing to the proliferation of developing industries in the region, especially in countries such as Saudi Arabia and South Africa. Saudi Arabia’s oil and gas industry has been experiencing exponential growth. According to the Organization of the Petroleum Exporting Countries, Saudi Arabia possesses around 18% of the world’s proven petroleum reserves and is the largest exporter of petroleum. Iran and Saudi Arabia are slowly moving towards infrastructural activities. Additionally, increasing construction activities across the region are also expected to drive market growth.

Which Future Developments Are Expected to Impact the Steam Turbine Market? 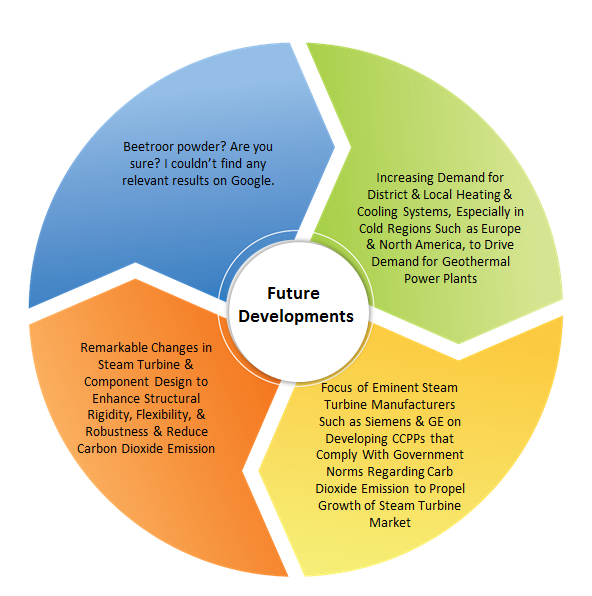 What Information Does the Steam Turbine Market Report Cover? 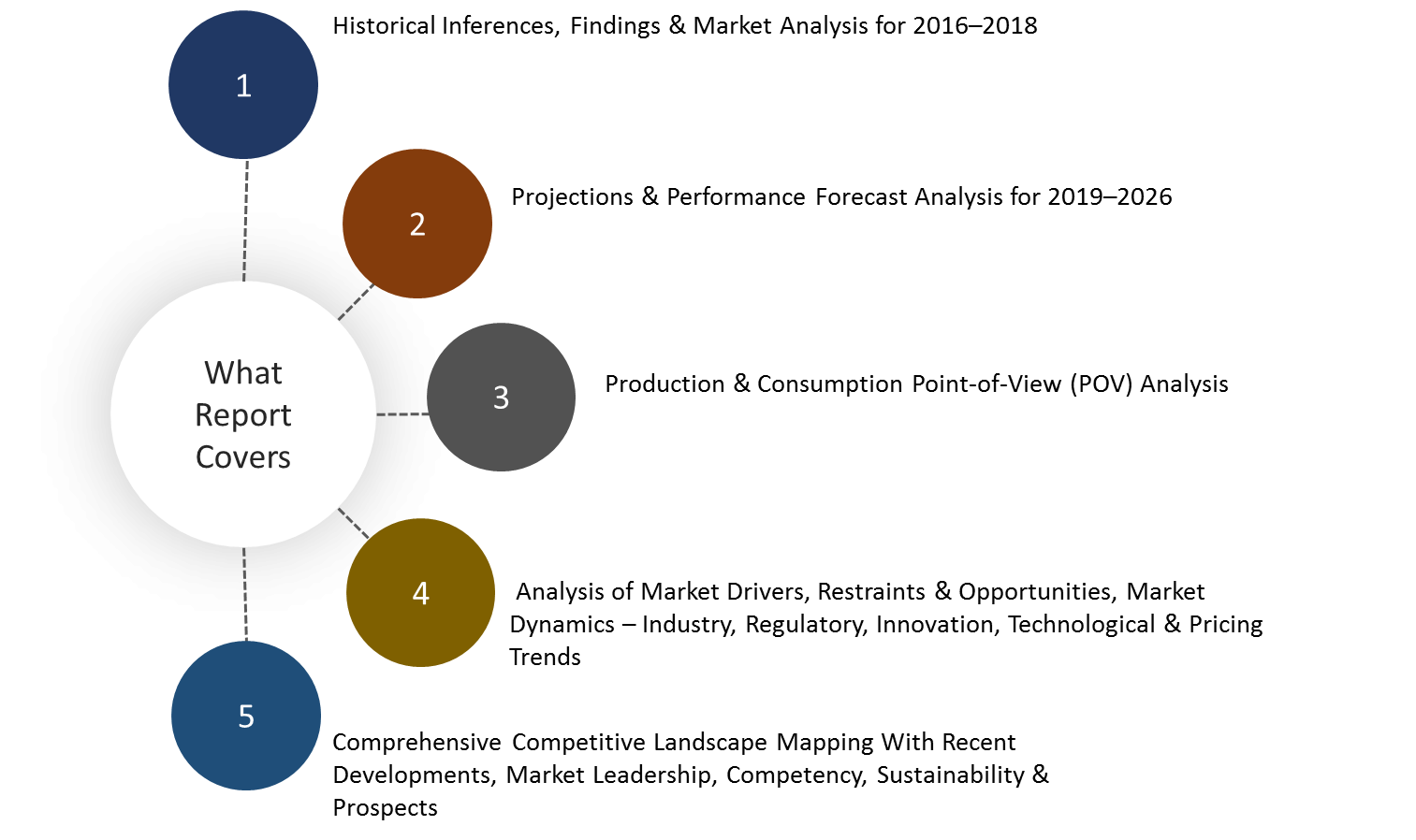