The world’s crude steel production reached 1,808.6 million tons in 2018. Steel is the world’s most important engineering and construction material. It finds application in the manufacturing of electrical appliances, cargo ships, and surgical scalpels, among others, for its strength, weldability, and ductility.  Steel is also eco-friendly and can be recycled repeatedly without any loss of quality. China is the world’s largest producer and consumer of steel; thus, slackening in the Chinese economy is bound to have a detrimental effect on the global steel sector. The recent coronavirus outbreak has brought several industries in China to a standstill, disturbing global economic activity.

The construction sector is the largest consumer of steel worldwide and accounts for over 50% of the world’s steel. Steel provides a robust framework for the construction of roads, rails, skyscrapers, parking lots, and bridges tunnels, among others. As per the recent United Nations report of 2019, the world’s population is estimated to rise by 2 billion in the next 30 years, up from 7.7 billion to almost 9.7 billion by 2050. Thus, rapid urbanization, engendered by the rising population, will provide the requisite impetus to market growth.

Steel manufacturers are actively working to offer highly efficient and recyclable steel for the construction of carbon-neutral and energy-efficient buildings. The U.S. Bureau of Economics depicts that global construction activities have increased by almost 21% since 2011. The construction sector generates nearly USD 1.3 trillion worth of infrastructure every year.

The automotive sector has been witnessing considerable growth in the last few years. The extensive adoption rate of steel for the manufacturing of vehicles drives the market. As per the reports of the International Organization of Motor Vehicle Manufacturers, in 2018, around 95.6 million vehicles were produced globally. As per the World Steel Association, on average, about 900 kg of steel is used for the manufacturing of a vehicle.

The international shipping industry is accountable for the transportation of around 90% of world trade. The United Nations Conference on Trade and Development (UNCTAD) anticipates that the operation of merchant ships provides for around USD 380,000 million in freight rates in the worldwide economy, which amounts to 5% of the total world trade. As the world’s population is on a continuous rise, emerging economies will further demand more raw materials and goods that need transpiration via ships, trains, etc.

As per OECD reports, the number of contracts for new ships observed an upsurge in the year 2017, after a duration of relatively low ordering activity in 2016. In 2017, the number of total contracts was approximately 80% higher than that in 2016, where monthly new contracts were below 2 million CGT, and the quarterly average was a miserly 3.5 million CGT. The emergence of new orders further boosted the demand for steel in the market. As per the Observatory Economics of Complexity, the top exporter of passenger and cargo ships is Asia, with South Korea, China, and the Philippines accounting for USD 27,900 million. Europe accounts for 31% of the total passenger and cargo ship exports, i.e. USD 49,200 million. 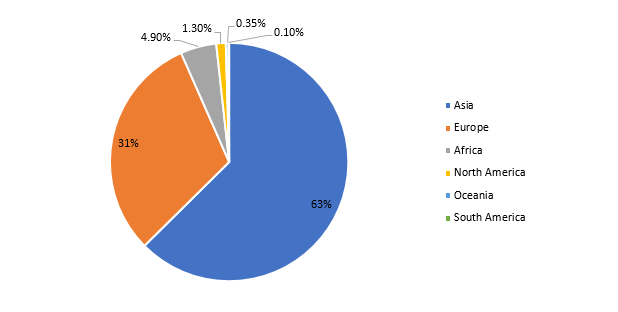 The demand for steel from the auto and shipbuilding industry strengthened in 2019. The leading South Korean steel manufacturer, POSCO, stated that it produced as much as 9.41 million metric tons of crude steel between January and March 2019, marking a 2% increase against the 9.23 million metric tons in 2018.

The steel market is segmented based on type and application. The four types of steel, carbon steel, alloy steel, stainless steel, and tool steel, are extensively used across industrial, construction, automotive, and power sectors.

Stainless steel is a chromium or iron alloy with 10–30% chromium content. Several grades of stainless steel are available in the market. The most commonly used is the AISI type 304 SS with chromium-nickel constituent and low carbon content. Stainless steel is known for its corrosion resistance, formability, and cleanability, which is why it is primarily used in kitchen sinks and lab sinks.

Tool steel contains molybdenum, tungsten cobalt, and vanadium in varying quantities to enhance heat resistance and durability. It is extensively used in the manufacturing of cutting and drilling equipment.

North America’s robust infrastructure drives steel consumption in the region. Currently, the construction of tunnels is underway in the region, which is accelerating the demand for steel as it can withstand arduous conditions. For instance, a new six-lane tunnel construction project in Virginia, U.S., worth about USD 3.3 billion, is slated for completion in 2024. Similarly, the Parallel Thimble Shoal Tunnel Project, a new two-lane tunnel under the Thimble Shoal Channel, is expected to cost USD 755.98 million. Such projects are expected to drive the demand for steel in North America. 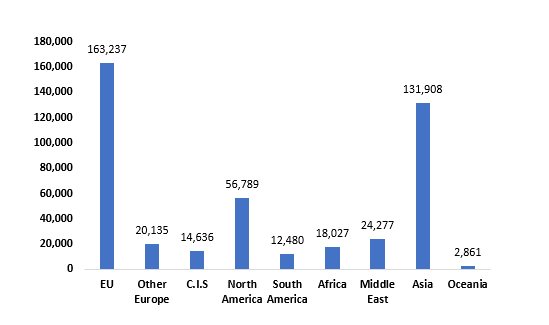 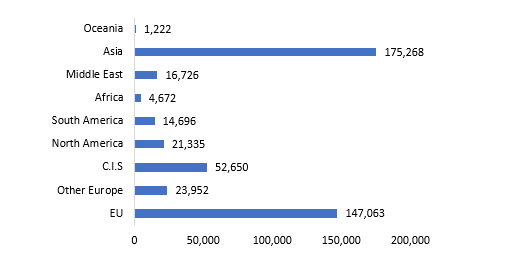 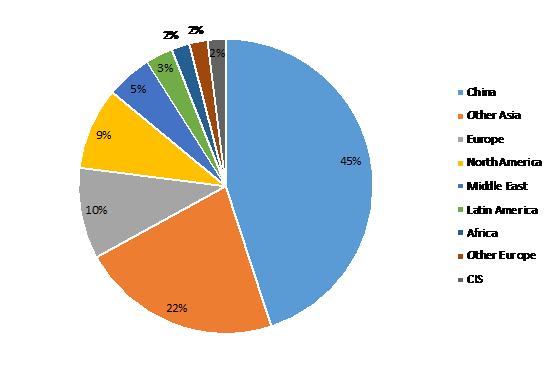