Surfaced and groundwater are used to meet the ever-increasing demand for water in agriculture, industrial, and domestic sectors. As per the Groundwater Protection Council, in the U.S., about 27 trillion gallons of groundwater is withdrawn for use each year. Countries are striving to become self-sufficient and less dependent on other countries, which is leading to advancement in in-house agriculture and industrial activities. Developed and developing countries are using advanced technologies to create an ideal environment for agriculture and industrialization. Burgeoning socio-economic activities across the globe are driving the surfaced and groundwater monitoring market.

Globally, water bodies are growing toxic due to rapid urbanization and the dumping of waste. To address the situation, countries are channelizing efforts to clean such water bodies and maintain water quality. They are also investing in new technologies such as sensors, GOES satellites, and IP cell modems for the same. Moreover, changing demographics and climate change are providing impetus to the market.

The quality of surface water in many parts of developed economies has remarkably improved in the last few years. On the contrary, the situation in developing economies is worrisome. It is estimated that around 70% of the surface water in India is unfit for consumption. As stated by the World Economic Forum, everyday, almost 40 million liters of wastewater enters rivers and other water bodies with only a tiny fraction adequately treated. The traditional approach of monitoring water quality is slow, tedious, expensive, prone to human error, and is limiting the number of water sample testing. Thus, the rapid development of sensors and wireless communication technologies is driving the use of automatic sensors in water monitoring.

The development of smarter and smaller sensors that enable the monitoring of a wide range of environmental parameters at lower costs is driving the market. Access to groundwater monitoring can be difficult at times, which is further raising the need for new and advanced sensors. For instance, the development of systematic aquifer and improved technologies for drilling and pumping has contributed significantly to generate greater benefits from groundwater.

Globalization has led MNCs to tap new international markets, which has drastically reduced the cross-border entry barriers. Growing population and economic shift towards more resource-intensive consumption pattern are driving the market. It is known that water is an integral part of manufacturing almost every product, which further increases the need for monitoring systems in industrial applications.

As per the United States Geological Survey (USGS), industrial water is used for fabricating, processing, washing, diluting, cooling, and transporting products. As recorded by the Commission for Environmental Cooperation, globally, high-income countries use about 59% of water for industrial use, while low-income countries use 8%. The below info-graph depicts the industrial production of the G-20 members in 2019. 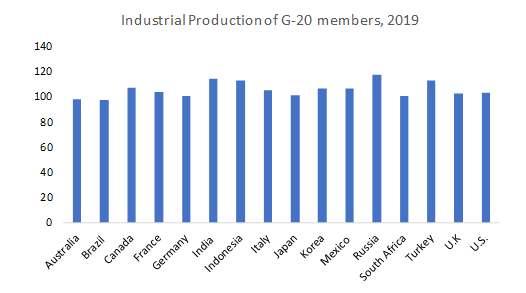 Note: Industrial production refers to the output of industrial establishments and covers sectors such as mining, manufacturing, electricity, gas and steam, and air-conditioning.

The surfaced and groundwater monitoring market offers lucrative opportunities due to increasing agriculture, expanding power plants, and growing industrialization around the world. For in-depth learning, we have segmented the market by product type and application. By product type, the market is segmented into surfaced water and groundwater.By application, the market is segmented into power plants, industrial, municipal wastewater treatment plants, and environmental monitoring.

Groundwater is an integral part of the agriculture sector as it aids in intensifying and diversifying the cropping system and acts as a shield against droughts. Changing global climatic conditions are intensifying droughts in many areas of the world, which might hamper the agriculture sector. For instance, the Sahara Desert covers a large part of Morocco. About 18.22% of the country’s arable land is under vegetation, and around 12.62% is forest-covered while the rest is desert. To mitigate the effects of recurrent droughts, the government has set up a USD 633 million contingency plan.

Rapid growth in population and industrialization has led to the establishment of hydropower plants in developing countries. Countries are shifting towards cleaner and renewable energy solutions and are heavily investing in hydro projects for the same. As per the International Hydropower Association, in 2017, the global hydropower installed capacity rose to 1,267 gigawatts (GW), including 153 GW of pumped storage. In the same year, about 21.9 GW of capacity was added, including 3.2 GW of pumped storage. 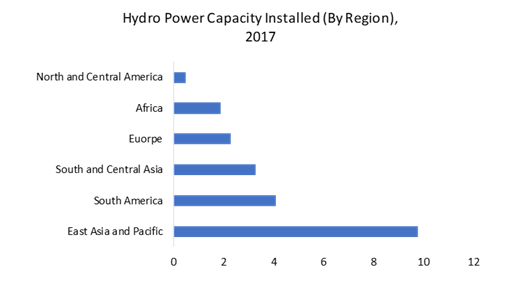 The above graphical representation depicts the hydropower plants installed in 2017. Geographically, Asia-Pacific added about 9.8 GW to its capacity, followed by South America (4.1 GW). Manufacturers are specifically designing surfaced and groundwater monitoring solutions for power plants to maintain water quality.

Geographically, the surfaced and groundwater monitoring market has been segmented into North America, Europe, Asia-Pacific, South America, and the Middle East and Africa. 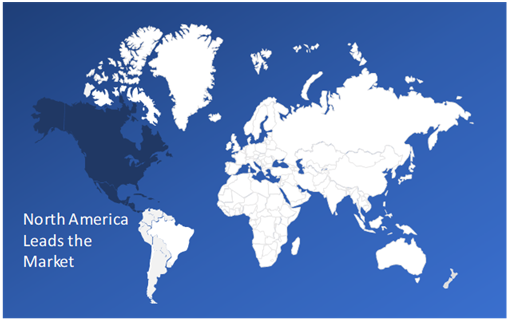 The U.S. Leads the North America Surfaced and Groundwater Market

North America dominates the surfaced and groundwater market. The region is backed with the presence of the U.S. that has been using groundwater in various applications since the early ’90s. In the country, groundwater is used for more than 35% of livestock compared to irrigation water. It is paramount to monitor groundwater level, acidity level, and pollution before using the water for irrigation, farming, and other processes.

As per the U.S. Geological Survey 2018, the estimated use of groundwater in the U.S. increased by 8.3%, while the use of surface water declined by 13.9% during 2010–2015. Additionally, about a quarter of all the U.S. rainfall becomes groundwater. It is estimated by the USGS that about 30% of the U.S. stream-flow is from groundwater, which is further driving the demand for monitoring systems.

In the rural areas of the U.S., more than 90% of the domestic water supply is from groundwater. Even some of the large cities are dependent on groundwater. In the U.S., California pumps about 17.4 billion gallons per day of groundwater for all purposes, which is 2.4 times more than Texas.

The regional market is also supported by government programs such as the National Groundwater Monitoring Network and Next Generation Water Observing System (NGWOS). Under the program, NGWOS will integrate fixed and mobile monitoring systems such as webcam and new ground-and space-based sensors in water, air, and ground. Thus, the advent of such next-generation technologies is projected to spur the regional market in the coming years. The below infographic depicts the use of groundwater in the U.S. in 2016. 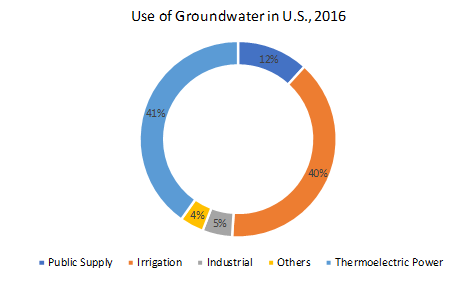 The surfaced and groundwater monitoring market is bolstered with the presence of leading and local players that are unveiling new products and equipment for accurate quantitative and qualitative data. In February 2020,Solinst Canada Ltd. unveiled a New Cable Upgrade for the Solinst 102 Water Level Meterthat has extra abrasion, resistance, and flexibility.

Which is the leading segment in the Surfaced and Groundwater Monitoring Market?

Agriculture Segment is expected to be the leading segment in Surfaced and Groundwater Monitoring Market during the forecast period.

Who are the active players in Surfaced and Groundwater Monitoring Market?

Which region is expected to hold the highest market share in the Surfaced and Groundwater Monitoring Market?

North America is expected to hold the highest market share in Surfaced and Groundwater Monitoring Market.

What is the key factor driving Surfaced and Groundwater Monitoring Market?

Burgeoning socio-economic activities across the globe, the rapid development of sensors, and wireless communication technologies are the key factors expected to drive Surfaced and Groundwater Monitoring Market during the forecast period.