UAV-based technologies are witnessing significant growth not only in the military but in other commercial sectors such as retail, delivery and transport, construction, and agriculture, among others. For instance, in January 2019, the e-commerce giant Amazon unveiled its new drone as a part of its ‘Prime Air Programme’ initiative. This drone is designed with an aim to scale the company’s delivery network efficiently. However, for technologies such as drones to become valuable and integrated contributors to any industry vertical, a significant amount of time and investment is required in R&D.

The technology is at its nascent stage and cost around USD 2,000–USD 3,000 (consumer and commercial); thus, it demands cautiousness to avoid untimely crashes and malfunctions during operation. UAV parachute recovery systems ensure smooth functioning, especially during the landing process. 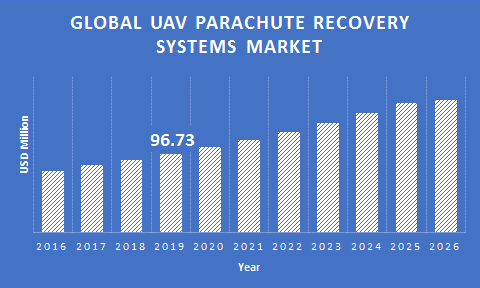 Drones have effectively disrupted operating models and businesses in key sectors such as urban development, traffic management, forest and wildlife, and healthcare, among others. The table below briefly explains the applications of drone technology in prominent industrial verticals.

The expanding applications of drones in commercial areas have also broadened the associated concerns, which include monetary risks and risks to civilians in the case of accidents. UAV parachute recovery systems play a vital role in mitigating these concerns, and thus, the future prospects for market growth are pegged to remain positive.

The use of drones in the military was traditionally limited to policing and surveillance. According to a study conducted by Goldman Sachs, the military segment holds an approx. 70% share in the overall drone market, followed by commercial and consumer or recreational applications. Military drones are available in various sizes and classified as class I, class II, and class III (based on weight); the selection of the size varies with the mission or project. Differentiation in sizes results in several environmental concerns such as accidents, operational disturbances in taking off or landing, and mid-flight disturbances. The deployment of emergency recovery systems such as parachutes is helpful in such scenarios.

A fixed-wing UAV consists of one rigid wing such as that of a traditional airplane, and a large fraction of the required lift during take-offs is created by the wing, making it more efficient than other UAV types. Fixed-wing UAVs are inclined to fly with high speed, cover a wide range of areas regardless of wind conditions, and incorporate an average flight time of about a minimum of two hours to a maximum of 16 hours if the drone is powered by a gas engine. They find widespread applications in the military as they often used as an alternative to manned flight in risky situations.

A rotary-wing UAV, also known as a multi-rotor wing UAV, is constructed of a central body and multiple rotors (a minimum of four rotors and a maximum of six to eight rotors) that power flight. These UAVs offer greater maneuverability and are compact and easy to use as compared to traditional fixed-wing UAVs. These benefits make them ideal for application in commercial activities such as aerial photography, video aerial inspection, construction, leisure, and agriculture.

With the application of UAV drones being widened from military to commercial purposes, several new risk exposures such as crash incidents are emerging. More such exposures are likely to occur with the introduction of regulations that would encourage the more widespread use of drones, resulting in multi-million dollar claims against operators, manufacturers, and associated businesses. 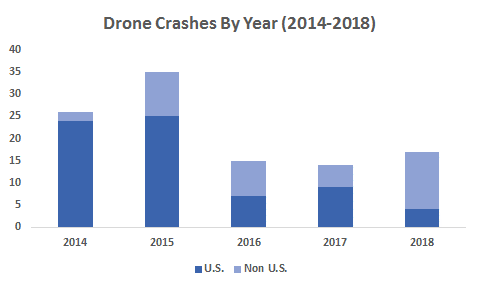 The above graph depicts the U.S. holding a significant share in drone crash incidents compared to other countries, namely Germany, the U.K., China, and Saudi Arabia, in the year 2014–2015. However, a considerable decline has been observed during 2016–2018 in the number of crashes, primarily on account of the regulations introduced by the Federal Aviation Administration (FAA) in 2016 under Small Unmanned Aircraft Rule (Part 107). This regulation directs drone pilots to operate UAV drones within visual sight and design drones equipped with anti-collision measures such as lights and rescue systems.

Drone technology is bringing in growth opportunities for countries such as Germany, the U.K., and France in Europe, which is a result of the increasing number of drones that are currently operating for private and commercial use. According to the German Aviation Association, currently, about 500,000 drones operate in Germany, of which about 455,000 are privately operated drones used for surveying, mapping, filming, photography, and inspection while a mere 19,000 drones are used for commercial purposes.

On account of a sharp increase in the applications of drones internationally, developing countries such as China, Japan, Australia, South Korea, and India are incorporating drone technology in their industrial verticals. For instance, China is moving towards UAV systems to deal with several domestic problems. Some of the cases where drone technology is being applied in China are:

These instances depict that the commercial use of UAV drones is expanding dramatically in China and simultaneously fostering opportunities for UAV parachute recovery systems as technical concerns regarding payload can hamper operations, leading to higher accidental risks.

Similarly, the drone market in Japan is estimated to grow profoundly in the coming years on account of growing applications in the commercial segment. According to a study conducted by the European Union–Japan Centre in 2016, the drone market for Japan was valued at about USD 28 million (2016) and will grow to an approx. of 930 million by 2030.

Latin American countries such as Brazil, Argentina, Peru, and Colombia are developing their own drones and have considerably expanded programs associated with them. For instance, the Corporación Industrial Aeronáutica Colombiana (CINAC), a local weapons company, introduced ‘Iris,’ a home-built drone, in 2016. The drone is designed to reach a height of approx. 8,000 feet and features optic sensors. Similarly, in 2014, the Peruvian Air Force (FAP) drafted plans to team up with Korea Aerospace Industries Ltd (KAI), a South Korean company, to manufacture mutually transferring kinetic technology (KT).

With the concept of smart cities taking roots in Middle Eastern countries such as the United Arab Emirates (UAE) and Saudi Arabia, technological progress continues to reach exponential heights. Components such as intelligent systems, autonomous transport, drones managing delivery & managing traffic, and robots collecting and processing data in real-time are pictured when talking about smart cities. Initiatives focusing on smart cities would certainly increase the application of drone technology and associated markets such as that of UAV parachute recovery systems to meet the safety and security demand.

Who are the active players in UAV Parachute Recovery Systems Market?

How much is the UAV Parachute Recovery Systems Market worth in the future?

Which is the leading segment in the UAV Parachute Recovery Systems Market?

Commercial Application Segment is expected to be leading segment in UAV Parachute Recovery Systems Market during the forecast period.

Which region is expected to hold the highest market share in the UAV Parachute Recovery Systems Market?

The increasing Number of Drones Used for Private and Commercial Purposes are the key factors expected to drive UAV Parachute Recovery Systems Market during the forecast period.

What was the value of Global UAV Parachute Recovery Systems Market in 2019?