Report Description
Regional Overview
Company Profiles
Buy Now
Jul 02, 2019   The global vehicle camera market is largely dependent on the automotive market. They are majorly utilized to record dash incidences, aid in reversing, aids for claims and insurance, easy parking, capture road rage incidents, record the drive and the activity of the driver, and others. Further, vehicle cameras have recently gained traction in the market. Earlier it was majorly seen only in the high-end cars but lately, most of the budget-friendly cars have been deploying these cameras majorly the...
Request Free Sample Report

The global vehicle camera market is largely dependent on the automotive market. They are majorly utilized to record dash incidences, aid in reversing, aids for claims and insurance, easy parking, capture road rage incidents, record the drive and the activity of the driver, and others. Further, vehicle cameras have recently gained traction in the market. Earlier it was majorly seen only in the high-end cars but lately, most of the budget-friendly cars have been deploying these cameras majorly the rear camera.

The global vehicle camera market is expected to grow from USD 6.2 billion in the year 2019 to USD 16.9 Billion in 2029 at a compound annual growth rate (CAGR) of 10% in the forecast period. 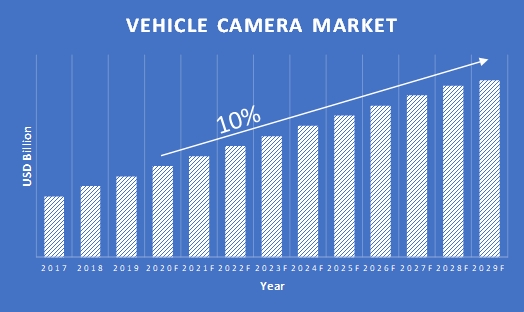 With the advent of automotive across the globe, most of the governments of the countries have released safety features that would benefit the automotive in the long term. For instance, by 2022, the Government of Europe has made it essential for all the new cars to be equipped with advanced safety features such as intelligent speed assistance, alcohol interlock installation facilitation, driver drowsiness, and attention warning systems, advanced driver distraction warning systems, emergency stop signals, reversing detection systems, event data recorders, and accurate tire pressure monitoring among others. Further, the Government of USA has the Department of Transportation’s National Highway Traffic Safety Administration (NHSTA), which has voluntary agreements to match autonomous emergency braking (AEB) with several automotive manufacturers by 2022. Some companies such as Tesla, Volvo, Audi, and Mercedes have already fulfilled the commitments by equipping almost three fourth of their new passenger vehicles with AEB. Further other nations such as Japan India, and China among others have also taken initiatives for the enhancements in the safety thereby propelling the growth of the market.

The proliferation of advanced technology in the automotive sector has enabled the development of autonomous systems. As per the Society Of Automotive Engineers (SAE), International established its SAE J3016™ ‘Levels of Automated Driving ‘They are categorized into five levels such as:

However, level 1 onwards there is a tremendous need for the deployment of high-tech devices such as sensors and cameras that assist the driver while driving. Further, as per Straits Research, the autonomous vehicles industry is anticipated to grow at a CAGR of 16% each year. Thus the high penetration of autonomous systems has bolstered the growth of the global vehicle camera market.

The major restraining factor of the vehicle camera market is the significant cost incurred for incorporating the camera solution onto the vehicles. The integrated connectivity of the cameras with the other parts and the media systems of the vehicles has made the installation quite tedious thereby surging the cost. However, this substantial rise in the price may have an impact on the sales of budget cars as they cater to the maximum market share. However most of the companies have been devising new methodologies to reduce the cost and further increase the sales, but the cost has restrained the growth of the vehicle cameras.

The pandemic led to a temporary lockdown of the nations, which on a wide scale hindered the verticals of businesses and the industry. The automobile industry, which primarily involves outdoor jobs, has been poorly exposed to the challenges that have contributed to a dramatic decrease in car sales. Furthermore, the instability of the supply chain market mainly due to the closing of national and foreign borders and the adherence to the decision not to use Chinese produced products hampered the growth of the market. However, the considerable spike seen in the sale of the automotive vehicle to limit the usage of public and crowded places may positively affect the growth of the market in the upcoming years.

Based on camera type the global vehicle camera market is divided into digital, thermal, and infrared. The digital segment caters to the maximum share owing to the cost-effective nature of the digital cameras. Further, there has been a high utilization of digital cameras in the passenger mid-sized and compact cars that cater to the major share among the passenger and commercial vehicles. Additionally, as stated by the Insurance Institute for Highway Safety, Highway Loss Data Institute in 2018, the use of cameras and back sensors reduced the back crashing involvement rates by approximately 75%. Further, the infrared camera segment caters to a significant share in the market owing to its limited deployment in luxury cars and certain commercial vehicles

Further, the favoring government initiative regarding the safety of the automotive has led to the adoption of the cameras in the vehicles.

North America caters to the maximum share in the vehicle camera market owing to the presence of advanced technology that surges the growth of the high tech devices in the cars. Further, favorable government regulations have bolstered the utilization of safety devices such as safety cameras and sensors in the automotive. Further, American companies such as Tesla and Uber have developed extremely advanced self-driving cars that are based on the latest technology. Further, as per Straits analysis, the surge from 2020 onwards owing to the increment in occurrences of vehicle collision especially in the countries such as U.S. and Canada has highlighted the requirements in the enhancement of vehicle safety standards. The development in the safety standards is expected to propel the market of vehicle.

Asia-Pacific is expected to exhibit the fastest growth in the forecasted year owing to the presence of multiple key players such as Panasonic Corporation, Samsung Electro-Mechanics, Tung Thih Electronic Co., Ltd., LG Innotek (LG Group), Sharp Corporation, Seeing Machines, and MCNEX Co., Ltd. among others. Further, countries such as China, Japan, Australia, and India are focusing on the development of their automotive sectors. The government of China is keen to implement a project to develop the safety standard in vehicles. Under ‘The Connected Vehicle Industry Development Plan 2020’, the automotive vehicles must be equipped with conditional assistance, partial assistance, and driver assistance. This new mandate is estimated to create new opportunities for the utilization of automotive cameras. Additionally, the ‘Action Plan for Realizing Automated Driving’ which is finalized by an expert Panel in China which is focused on augmenting the implementation of autonomous driving. After the execution of this plan, the vehicle camera market is anticipated to fortify their sales in the untapped segment of autonomous driving. Furthermost the automobile companies have shifted or opened up new manufacturing plants in this region owing to the availability of cost-effective labor and inexpensive raw material from China.