The healthcare industry has seen unprecedented growth over the last few years, with the emergence of new markets and the enactment of supportive legislation. However, several uncertainties are expected to impact the market in the future — changing healthcare dynamics, complex reimbursement policies, and a continuously evolving competitive landscape. Medical device manufacturers are under immense pressure in terms of cost reduction, unique innovations, and streamlining their operations. A few of the challenges the medical device industry faces are briefly discussed below.

The medical device industry in emerging economies, such as India and several African countries,faces tremendous challenges in terms of infrastructure availability and the access and affordability of medical technology. Emerging markets are price-sensitive,self-paying, and resource-constrained, and thus, the adoption of advanced medical technologies is limited.

With technological advances, several startupsare entering the market with innovations. However, these startups face numerous challenges —funding always being a critical one. Startups need not only funds for operations but also FDA compliance and other related costs. They must have the funds to sustain during the dead period from product development to product commercialization. The provision of public funds exists in western countries,unlike the eastern countries. Another key challenge is in terms of the compliance and regulatory framework. Getting regulatory clearance for a medical device is a prominent barrier that non-regulated hardware companies don't face. The time, spending, and assets required to obtain the necessary certifications can be one of the most substantial barriers in launching a new medical product.

Medical device manufacturers have started focusing on value-based delivery by including patients in overall care management. One of the important transitions the industry has experienced is the shift from treatment and cure to prevention through integrated smart technology, which can improve outcomes cost-effectively.

The integration of AI and IoT with medicaldevices is a notable transition in the industry. Medical device manufacturers have started developing individualized solutions to meet market demands. They have also started connecting with patients or consumers directly, changing the industry value chain. Breakthroughs in the industry are directing it toward providing agile, pervasive, and integrative solutions that will improve patient engagement, patient monitoring, and simultaneously alerting clinicians about the care management plan.

We provide customized research solutions through a holistic approachto help our clients achieve their goals. Our solutions cover the inclusions listed below.

Medical devices is a rapidly expanding industry within the healthcare sector that continues to grow with the launchof new technologies. Commercializing a product in the medical devices industry can be a challenge for many players, and our solutions comprising insightful data on a particular area or period of product launch can help companies overcome the challenge. Our data and analysis provide marketing and sales insights that help players gain market access.

A client of ours, a U.S.-based medical devices manufacturer, sought information on the cost-effective solutions available in the market at the time. It also sought to track the present and upcoming competition in the market. Our team conducted a deep dive analysis to provide the company a comprehensive solution, which included cost-effectiveness analysis, pipeline analysis, technological landscape, regulatory landscape, and competitive analysis, to help identify the upcoming competition and, eventually, improvise its strategy.

We also help companies in strengthening theirR&D capabilities. Our expertise in analyzing company operations is what separates us from others, including our detailed study on opportunities to gain higher market shares by planning strategies and driving performance.

One of the manufacturers of cardiovascular devices (bioresorbable stents) had invested in product development, and its device was in the last phase of the clinical pipeline. Meanwhile, the market had experienced many product recalls ofbioresorbable stents, raising concerns aboutproduct safety. The company required detailed insights into market forecasts and competition analysis, along with a detailed outlook of product recalls.

Straits Research executed this project in two stages to help the client meet its objectives. At first, our research team executed exhaustive primary research to understand the opportunities in the market and the technical aspects of bioresorbable stents. We provided a comparative analysis to check the risk of product recall for the potential stent in the pipeline. Our industry ecosystem analysis helped theclient understand the present market scenario and where the market is expected to head in the near future. The solution we provided effectively helped the client accelerate the process of product development.

Straits Research provided a detailed product mapping of distributors and detailed competitive analysis. We conducted a regional study with the help of industry experts to identify market trends. Our findingshelped the client identify the potential threats and devise a competitive strategy to withstand the market competition.

Impact of the COVID-19 Pandemic on the Medical Devices Industry

The global COVID-19 pandemic has increased the demand for medical services. National lockdowns have been announced in amajority of countries to curb transmission, and industries have been severely affected. The medical device industry is critically hit due to disruptions in manufacturing and the supply chain. China, the epicenter of the disease, was hit hard by COVID-19, and lockdowns were announced in several parts of the country. The global medical device industry significantly relies on China for the supply and manufacturing of critical components, such as disposables, capital equipment, and consumables.

Effects of the Production Slowdown in China, the U.S.'s Fourth-Largest Supplier of Medical Technology

As per U.S. FDA data, China is the U.S.'s fourth-largest supplier of medical technology. In the U.S., over 60% of the FDA regulated products imported from China are medical devices. Due to the temporary shutdown of manufacturing facilities in China, the volume of medical devices being manufactured has been reduced significantly. Moreover, international travel restrictions have impacted the supply chain, and the highly regulated nature of the medical device industry makes it difficult to make and manage any changes in the supply chain or manufacturing.

A sudden surge in demand, panic buying, and misuse of personal protective equipment (PPE), such as masks, gloves, surgical gowns, respiratory protective devices, and other medical equipment and ventilators, have led to shortages. The WHO has advised manufacturers and governments to increase manufacturing by 40% to meet rising demand. To protect healthcare workers on the front line, countries such as India have increased domestic production.

Public and Private Initiatives to Bridge the Gap

To meet the growing demand for PPE, the Indian government has enlisted 12 manufacturers that will manufacture PPE or coverall kits for front line healthcare workers. Some of these manufacturers are Arvind Mills, Amare Safety, JCT Mills Phagwara, Mumbai-based Sure Safety, Manchanda, Shree Healthcare, Chennai, and Delhi-based Sai Synergy. Within a span of 15 days, India has planned to more than double its daily production of PPE suits from 12,000 to 30,000 by April 23, 2020. However, the country needs 200–300 hot air seam sealing machines to increase daily production close to a target of 100,000 per day.

The Defence Research and Development Organisation, India, has also collaborated with two local manufacturers for the production of N95 masks on a daily basis. These manufacturers are able to supply over 50,000 N95 masks per day. However, the government plans to ramp up the production capacity to 100,000 per day.

Apart from this, ventilators is another category of essential equipment that has experienced an upsurge in production. 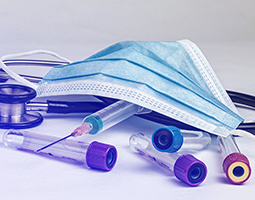