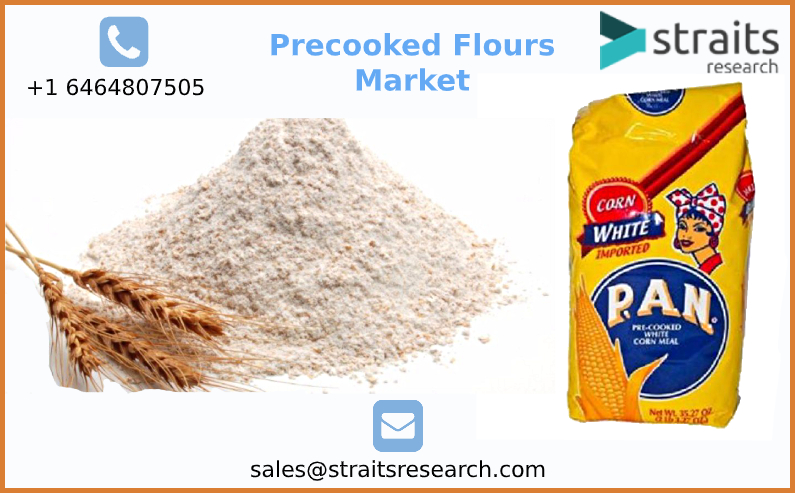 Precooked flour is obtained from precooked grains, it gives better texture to the food products as compared to its counterparts. It is widely being used in manufacturing of bakery, fast food, infant formulas, soups and other food products. Growing urbanization has increased demand for ready to cook and bakery products worldwide. Instant food products use precooked flours due to their not interfering with flavours quality.

Wheat is capturing the largest market share of 27.6% in 2018, rice flour is gaining traction in baby food formulas

Precooked wheat flour is widely used for making bread, biscuits, cakes, pies, pizzas, pastries, batters, and coatings, among others. Wheat is the second-largest agricultural crop after rice, and China, India, Russia, France, Canada, Germany, and the U.S. are some of the largest producers of wheat. Globally, wheat is cultivated in around 218 million hectares of land with an annual production of about 730 million tons. In addition, wheat ranks third in the U.S. after corn and soybeans. In 2019-20, wheat production in EU would account for around 151 million metric tons, the United States Department of Agriculture (USDA). France and Germany are the top wheat-producing countries in Europe. Rice flour is widely adopted in baby food and infant cereals due to its easy digestibility. Baby food products are the fastest growing industries worldwide especially in emerging economies. As the purchasing and living standards are improving consumer demand for high quality baby food. China’s infant milk market is growing at substantial rate, after government’s relaxation over its one-child policy, which encouraged Chinese families for a second child. In 2016, 1.31 million more births were recorded, which have positively affecting the infant milk sector, the European Union.

Asia Pacific is an emerging market in the forecast period

Asia Pacific is growing at a significant CAGR in the forecast period. Middle-class population is more inclined towards adopting a diverse and healthy diet, which is playing a key role in the growth of precooked flour market. The regional market has been witnessing a rise in the adoption of plant-based diets, which is a positive sign for precooked flour manufacturers. The China vegan market is experiencing significant growth. Whereas, around 22% population in Hong Kong is practicing plant-based diet, the Food Revolution Network Organization. Malnutrition, a major health concern in the APAC region. Many East Asian countries like Indonesia and the Philippines are dealing with the issue of malnutrition. Whereas, in Southeast Asia, many families are still lacking access to nutrient-rich foods. In the region alone, around 65 million people are undernourished, and half the population suffers from iron deficiency, iodine deficiency, and vitamin A deficiency, the Milken Institute. Malnutrition crisis require unconventional solution, in turn, facilitating the growth of the precooked flours market. In addition, growing retail space in the region is also opening new avenues for international brands. In line with this, Amazon is planning to acquire a 49% stake in Future Coupons, India’s one of the largest retail chains. In addition, it is also expanding its online grocery business in India.

South America plays an important role in the growth of the market owing to abundance of raw material in the region. South America is one of the leading producers of the raw material. In the region, Brazil is set to become the second-largest maize exporter worldwide, the FAO. During 2019–2020, Brazil’s maize export is forecasted to reach 29.5 million tons. Presence of many agricultural organizations is also providing growth prospects for investment in manufacturing milling plants in the region. For instance, Agricultores Federados Argentinos SCL (AFA) is one of the leading agricultural cooperatives in Argentina with 36,000 associated farmers.

The global precooked flour market is fragmented with the presence of many small manufacturers along with big companies. For instance, Goya Foods is one of the leading food manufacturers engaged in providing authentic Latin cuisine. The company has a strong hold on mainstream consumers, accounting for around USD 1.5 billion sales annually. Presence of regional players giving market competitive edge. For example, Empresas Polar is one of the largest breweries in Venezuela. The company manufactures and distributes a variety of food products and beverages, including beer, soft drinks, corn flours, rice, and pasta, among others.