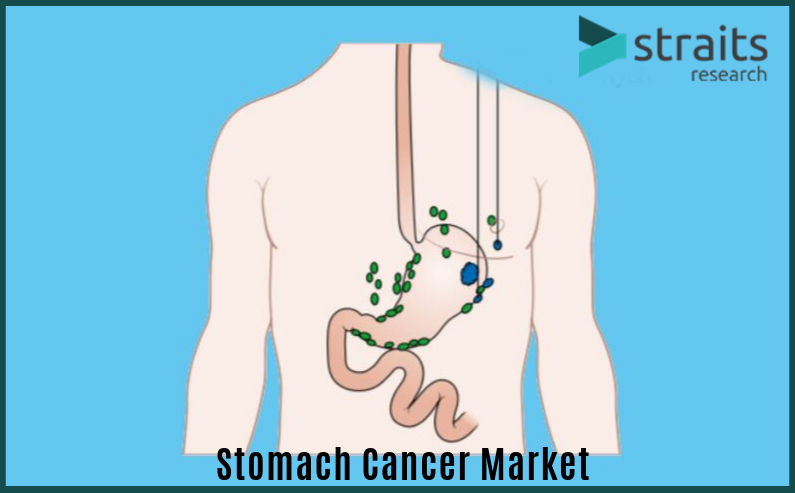 Stomach Cancer is an aggressive form of malignancy that spreads in the stomach. The expansion of gastric cancer is a complex and multifactorial process that involves etiological and epigenetic alterations. Most commonly, this cancer develops in the pyloric area of the stomach. A study suggests that men are more prone to gastric cancer than women. Gastric lymphomas, neuroendocrine tumors, and gastrointestinal stromal tumors are some of the major types of gastric cancer.  They are mostly caused by smoking, H. pylori infection, and occupational diseases regardless of the genetic makeup of the person. In July 2012, European Commission granted orphan drug designation to Ramucirumab for gastric cancer treatment.

In accordance to the Cancer Research U.K., around 44% of men survive gastric cancer for at least once in a year, and the number is likely to fall to 20% for five years. On the global scale, prevalence of stomach cancer is less common in the eastern European regions but highest in East Asia and the Asia Pacific regions. For instance, Korean countries are housing one of the highest populations of stomach cancer with (39.6 per 100,000), followed by Mongolia with (33.1 per 100,000), and Japan with (27.5 per 100,000). In East Asia, the average incidence of gastric cancer is 32.1 per 100,000 among men, and 13.2 among women, NIH. This cancer is more prevalent among the age group of 60 to 80 years. According to American Institute of Cancer Research there were 1 million new cases of stomach cancer in 2018.

By therapy, the stomach cancer market is segmented into chemotherapy, surgical therapy, target therapy, and others.  Targeted drug therapy has the potential to kill malignant cells and increase survival rates. FDA has approved several targeted therapeutics agents because of their less adverse effects, which is expected to flourish the segmental growth during the forecast period. Besides, targeted drugs such as imatinib and sunitinib, regorafenib, and Trastuzumab are commonly used to treat (GIST) gastrointestinal stromal tumors. In the U.S. alone, there are around 3000 to 6000 new cases of GIST diagnosed every year, National Cancer Institute.Separated from this, F. Hoffmann La Roche designed Trastuzumab (Herceptin) a type of targeted therapy targeting HER2 for gastric cancer.

Based on end-users, the stomach cancer market is segmented into hospital and specialty clinics, cancer research & treatment centers, and others.

Hospitals and specialty clinics segments are leading the market following the increasing prevalence of H. pylori infection. As per statistics provided by CDC, H. pylori infection causes more than 90% of duodenal ulcers and 80% of stomach ulcers, and approximately 25 million Americans are prone to suffer from peptic ulcers once in their lifetime. Additionally, 500,000 to 850,000 new cases of peptic ulcers disease and more than 1 million ulcer related hospitalizations are recorded every year in the U.S. The country witnessed around 20,249 hospital admissions for malignant neoplasm of stomach, with 25,605 finished consultant (FCI) incidences resulting in 62,477 FCE bed days in 2017, by National Institute for Health and Research.

Asia Pacific is housing a huge geriatric population suffering from stomach cancer. Also, the region has one of the highest mortalities rates when it comes to stomach cancer-related deaths. In 2018, the region witnessed 584375 deaths around 74.7% of the global total. According to the regional classification, 619226 men and 428298 women were diagnosed with stomach cancer in 2018.

In Europe, the prevalence of stomach cancer is increasing at an alarming rate, which, in turn, is unlocking several opportunities for the stomach cancer market in the region. According to ECIS (EU28), stomach cancer was accounted to be the 13th most commonly diagnosed cancer, and 7th most common cause for deaths in Europe. In 2018, 80,000 new cancer cases were recorded in the EU.

Market players are actively investing in R&D for developing innovative technology and improving product quality and effectiveness. Some of the leading players are also focusing on acquisition and collaboration with small scale industries for expanding the geographical footprint and product portfolio.

In September 2017, FDA approved immunotherapy drug ‘pembrolizumab’ (Keytruda) for use in some of the patients with advanced gastric (stomach) cancer. In aggregation with the pembrolizumab approval, FDA has also cleared the Dako PD-L1 IHC 22C3 pharmDx assay to measure PD-L1 expression in patients with stomach cancer.

Japanese Ministry of Health, Labor, and Welfare has approved additional indication of unresectable advanced gastric cancer, which has progressed after chemotherapy for its anticancer agent Lonsurf combination tablets T 15, T20. As of July 2019, Lonsurf of Tahio Pharmaceuticals Co., Ltd., has been approved in 68 countries for the treatment of metastatic colorectal cancer.