Understand the influence of COVID-19 on the Acetic Acid Market with our analysts monitoring the situation across the globe.

Global acetic acid consumption is expected to witness a considerable growth trend during the forecast period. Acetic acid is extensively used in the manufacturing of paints, adhesives, solvent, and purified terephthalic acid (PTA) used for manufacturing polyester resins. The demand for vinegar has been witnessing a significant surge as it offers umpteen health benefits such as regulating cholesterol and blood sugar levels. Acetic acid is also used for dyeing purposes in the textile industry and manufacturing polymers in the packaging industry, further driving the market growth.

Novel Applications of Acetic Acid to Drive the Market Growth

In the last few years, acetic acid has been gaining significant popularity for its health benefits. In 2016, the World Health Organization (WHO) recorded that more than 1.9 billion adults were overweight, which is subsequently rising the demand for vinegar and apple cider vinegar for weight loss. Acetic acid is used in low proportions as a food additive, flavoring, and preservative for its rapid dissolving and fat-burning properties.

In cosmetic industries, acetic acid is extensively used for manufacturing acetate esters, which is a catalyzed reaction between acetic acid and corresponding alcohol. Thus, the commercial production of acetate esters is projected to drive market growth. The emerging use of acetic acid as an active ingredient in manufacturing medicines provides an impetus to the market growth. The World Health Organization (WHO) has listed acetic acid as an essential medication and is extensively used in the pharmaceutical industry.

Globally, the burgeoning demand for paints & coatings is subsequently driving the demand for acetic acid. As per the estimations of the World Paints & Coatings Industry Association, the global paints and coatings market was valued at USD 164,900 million in 2018 and is expected to grow with a CAGR of 4.9%. Rising construction activities, debouching interior trends, and increasing spending power drive market growth. Apart from this, acetic acid is also used in the manufacturing of vinyl acetate monomer (VAM), a crucial component used in the production of paints and adhesives.

Acetic Acid’s Extensive Application in the Manufacturing of Vinyl Acetate

The food and beverage segment holds the largest share in the acetic acid market. Globally, the food & beverage industry is projected to grow at an exponential rate on account of rising demand for processed foods. Acetic acid is largely used in the food and beverage industries to prolong shelf life and enhance the flavor. It is a primary ingredient found in the pickling industry for its variable pH. Apart from this, rising disposable income is subsequently driving the sales of canned food. As per the statistics published by the U.S. Bureau of Economic Analysis, in the U.S., the personal disposable income increased from USD 16,568 billion in 2019 to USD 16,853 billion in 2020.

Asia-Pacific dominates the acetic acid market as the region is backed by the presence of leading market contributing countries, Vietnam, China, India, Indonesia, Malaysia, and Thailand. China is the world’s largest producer of acetic acid and accounts for more than half of the global production capacity. Rapid industrialization, increasing foreign investment, and favorable government regulations drive the market growth. The below info-graph depicts the FDI inflows in ASEAN region for the period 2010–2017. 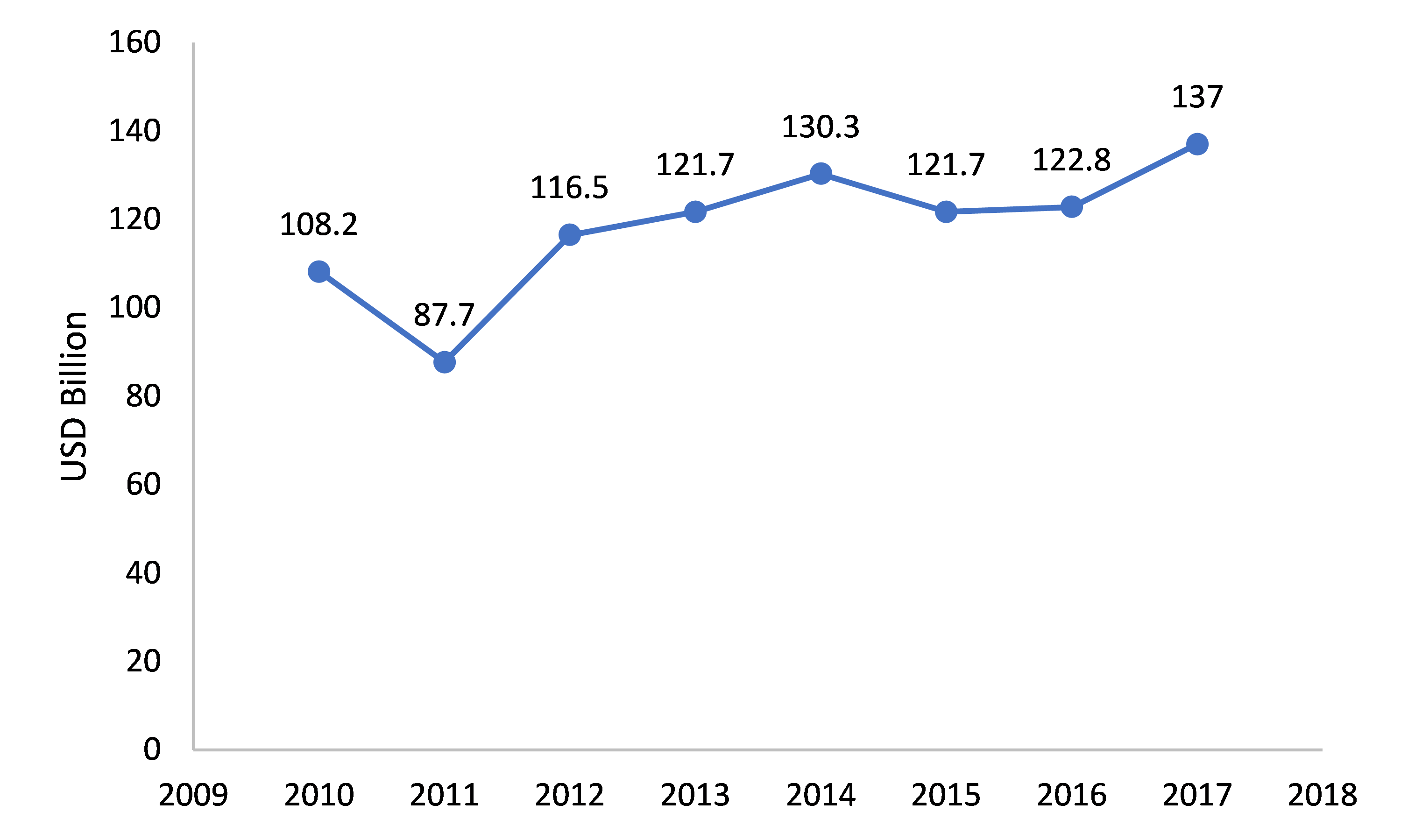 The textile industry in the region is growing at an exponential rate, further driving the demand for acetic acid. As stated by the India Brand Equity Foundation (IBEF), the Indian textile market was valued at USD 150 billion in 2018 and is expected to grow with a significant CAGR during the forecast period. As per the China Energy Group, China is the world’s top textile exporter and contributes about 45% to the global textile and clothing exports.

Europe is expected to have a substantial growth rate in the global acetic acid market after the Asia-Pacific region. The growth is attributed to the lower prices of acetic acid in the market and large consumption of the acid to manufacture viny acetate monomer (VAM), which accounts for about one-third of the overall consumption of the region.

The below-mentioned info-graph depicts the top importers of acetic acid according to regions for the year 2017. 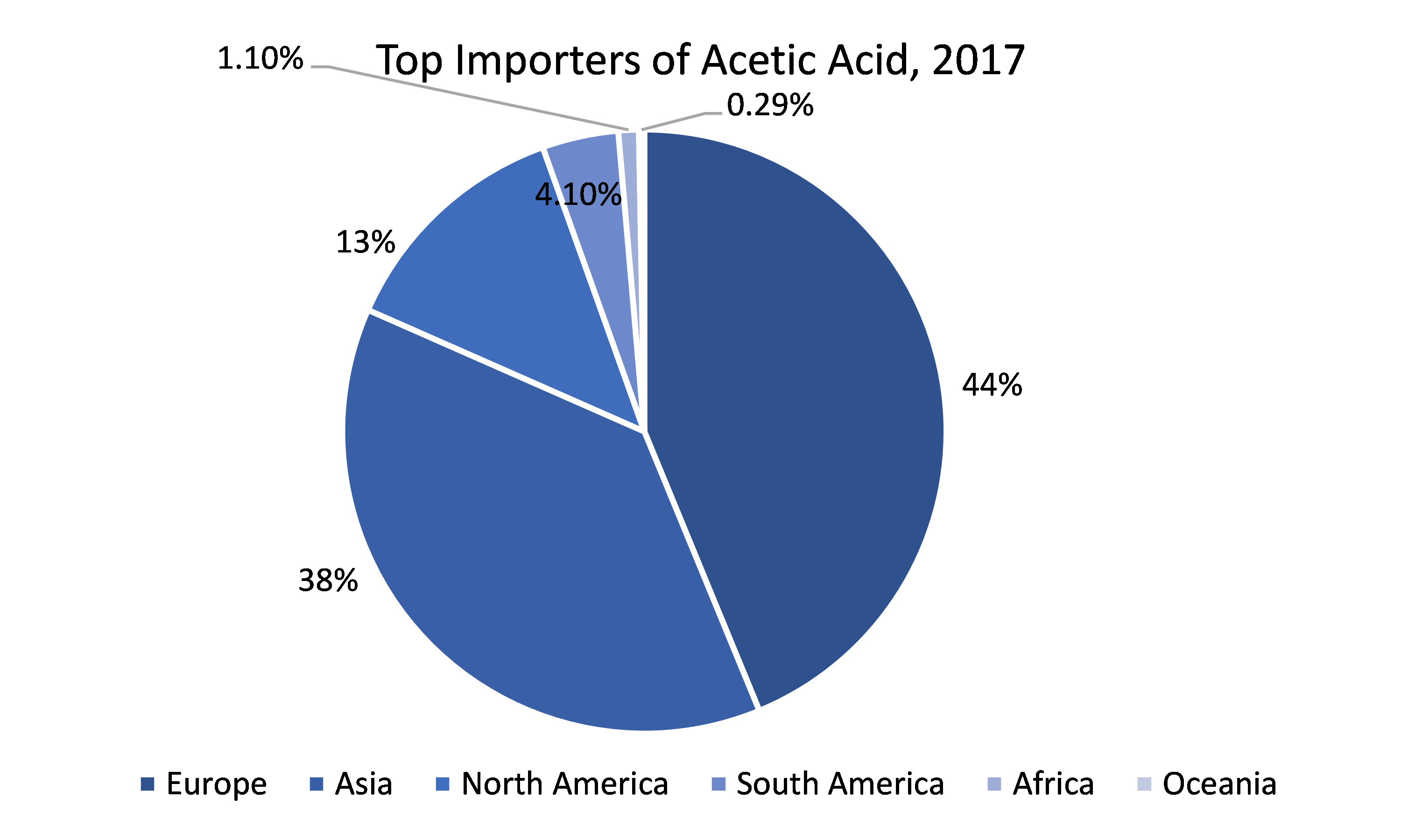 As seen above, the European region is the largest importer of acetic acid, with export value reaching USD 719 million. Among the region, major countries involved in the import trade are Belgium-Luxembourg, Germany, The Netherlands, Italy, Switzerland, Poland, France, and many others. Additionally, the region enjoys the presence of major pharmaceutical companies due to advanced technology in research and development. The strong pharmaceutical sector in the European region, suggests higher consumption levels of acetic acid in the region. According to the figures published by the European Federation of Pharmaceutical Industries and Associations, the total pharmaceutical production has significantly risen from USD 118 million in 2000 to USD 260 million in the year 2016. The statistics mentioned above state the ability of the region to lead the global acetic acid market in the coming future.

Which is the leading segment in the Acetic Acid Market?

Food and Beverages End User Segment is expected to be the leading segment in Acetic Acid Market during the forecast period.

Which region is expected to hold the highest market share in the Acetic Acid Market?

China is expected to hold the highest market share in Acetic Acid Market.

What is the key factor driving Acetic Acid Market?

Rising construction activities and debouching interior trends, increasing the use of acetic acid in the food and beverage industry are the key factors expected to drive Acetic Acid Market during the forecast period.

Who are the active players in Acetic Acid Market?