Blockchain is a core technology that records transactions on a public, distributed ledger, where a third party is not needed in most cases. The technology is considered to be secure and efficient; hence, its applications are observed across several industries such as BFSI, automotive, healthcare, manufacturing, and others. 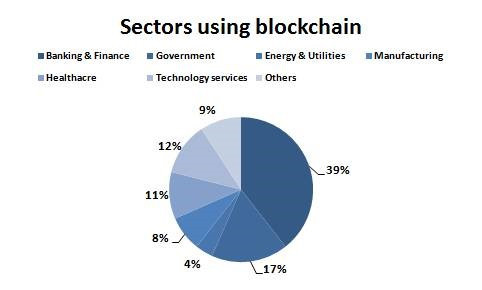 The aforementioned pie chart depicts the percentage share of various industries served by blockchain. Banking and finance, government, and manufacturing sectors, as shown in the pie chart, extensively employ the blockchain technology.

Blockchain technology is at the cusp of radically changing the face of manufacturing by being an ideal solution for the sectors struggling over managing complex supply chain management, operational transparency concerns, and data breach. Trends such as industry 4.0 and the integration of the internet of things (IoT) have been combined by several companies across the globe to meet the global standards of efficiency and growth. Some examples of companies incorporating blockchain solve specific operational concerns. For instance, IBM Corporation and Maersk integrate blockchain to track containers during shopping processes.

The global automotive industry is increasingly engaged in merging and relocating production centers to emerging economies, thus major automotive giants such as General Motors, Ford, Toyota, Honda, Volkswagen, and Daimler Chrysler, are shifting the production bases to countries such as China, India, Indonesia, and Thailand. However, with the considerable shift, there are several challenges faced by these players in terms of meeting consumer demands for styling, safety, & comfort, labor relations, and primarily bringing in manufacturing efficiency. As the manufacturing of automotive is discrete and includes mass production of spare parts and associated components, complexity becomes inevitable. In such cases, blockchain comes to rescue for these players by streamlining production processes and business channels.

Integration of Blockchain technology provides benefits such as:

The dynamic and highly fragmented manufacturing industry across the globe is confronting challenges caused by the complex supply chain ecosystem. With a massive number of stakeholders involved in the chain, the issues of low transparency, data breach, and others are jeopardizing. Such issues, in tandem with stringent manual processes and legacy technology, fail to provide the requisite infrastructure, making it difficult to track down operational activities such as the provenance of goods and the status of shipment. To sustain global competition and improve efficiency, manufacturers need to cash in on technologies, such as blockchain, to optimize and future-proof supply chain.

Following the Trail of Movements in Supply Chain

In the manufacturing cycle, the supply chain tracking plays a crucial role as it is primarily linked with the customers. Some of the alarming concerns faced by manufacturers are errors and delays in tracking the entire lifecycle of shipments, from the purchase order acknowledgment to the final receipt of goods in the warehouse. This delayed and conflicting information results in demurrage, lost sales, expediting costs in millions of dollars. By providing trusted, automated transactions, without any need for third parties, blockchain enables efficiency and agility by tracking down movements in the supply chain. It provides real-time data. Supply chain tracking, on the other hand, brings down costs, improves the timely delivery of goods, reduce wastage, and enable new financial models, eliminating the middlemen.

Blockchain Underscores the Disruptiveness in the Automotive Industry

The introduction of concepts such as autonomous cars and smart cities brought about fundamental changes in the present business models of operations in the automotive industry. For instance, Auto financing, one of the principal areas of operations will have a positive impact on blockchain technology

The purchase of cars generally involves loans to finance the transaction although financing differs by the nature of the transaction. However, a typical auto financing includes a host of verification steps to which blockchain can be applied for efficiency gains such as customer bank validation along with multiple phases of transaction setup and execution, issuing letters of credit, scoring and classifying risk, review of multiple documents sourced from different locations, and archiving of reviewed documents, among others. These benefits encouraged the adaption of blockchain not for just original equipment manufacturers in the developed countries but also in the developing countries. For instance, in 2017, Mahindra, an Indian automotive OEM designed a blockchain incubator with an emphasis on automotive financing:

The manufacturing sector in North America is cashing in on innovation and technological advancements in the sector. According to a study conducted by Cushman & Wakefield, the region’s manufacturing sector relies on the U.S. economy, accounting for 82% of the region’s economic output. The U.S partners with both Mexico and Canada, accounting for close to 80% of each country’s exports. Canada benefited from the North American Free Trade Agreement (NAFTA) on account of the tax exemptions and waivers, enabling the country to upturn the exports in energy, motor vehicles and parts, industrial machinery, aircraft, telecommunications equipment, and electronics segments. This makes the region a potential marketplace for disruptive technologies to hold a substantial share, as the growth of the manufacturing sector will present several operational challenges.

The Food and Beverage industry in Europe is the biggest manufacturing sector in terms of value. According to the European Union, over the past 10 years, European food & beverage exports doubled, reaching close to USD 1 Billion in 2018. However, various challenges struck the region in the functioning of the food supply chain regarding transparency and sub-optimal business-to-business relationships. Such a scenario demands the deployment of blockchain that will bring forth transparency in business functions, including the management of supply chain as well as building healthy business-to-business relationships by eliminating complex communication channels. Food fraud, as described by the Food Safety Net Services (FSNS), is an act of purposely altering, misrepresenting, mislabeling, substituting, or tampering with any food product at any point along the farm-to-table food supply chain. With the burgeoning food and beverage industry in Europe, such crimes are holding grounds intending to damage public health and mislabeling of food for financial gains. The alarming areas of risk are bulk commodities such as coffee and tea, and composite meat products. By employing blockchain technology, European food and beverage manufacturers can facilitate traceability records, thus streamlining operations and attaining consumer satisfaction.

Implementation of ‘Emirates Blockchain Strategy’ by the UAE Government

The LAMEA region encompasses countries such as the United Arab Emirates (UAE), Brazil, and South Africa, which are at the emerging stage. Several efforts have been observed from the regulatory bodies to introduce blockchain into industries. One such example is ‘Emirates Blockchain Strategy’ by the UAE government that aims at capitalizing blockchain in industrial verticals such as government, manufacturing, automotive, and transport.

Why Buy this Report?

Which region is expected to hold the highest market share in the Blockchain in Manufacturing Market?

North America is expected to hold the highest market share in Blockchain in Manufacturing Market.

Which is the leading segment in the Blockchain in Manufacturing Market?

Supply Chain Tracking Segment is expected to be the leading segment in Blockchain in Manufacturing Market during the forecast period.

Who are the active players in Blockchain in Manufacturing Market?