The global buzzer market was valued at USD 591.9 million in 2019. It is estimated to grow at a CAGR of 5.6% during the forecast period (2020–2029), against a backdrop of modernization, changing consumer lifestyles, and increasing adoption in vehicles and smart electronics.

Magnetic and piezo buzzers’ compatibility with IoT technologies drives their adoption in modern automobiles and electric vehicles. On the consumer electronics front, they find applications in smart electronics such as earphones and wearables. On a broad scale, Industry 4.0, the automotive sector’s growth, and incorporation of AI and IoT for integration and connectivity drive the global buzzer market. The shifting consumer inclination toward smart electronics also provides a fillip to market growth.

Post moderate growth in 2013–2016, the buzzer market has been gaining pace on account of demand from consumer electronics and automotive sectors. Overall consumption grew from 790.9 million units in 2013 to 1,037 million units in 2019, recording approx. 31% growth over a span of six years. 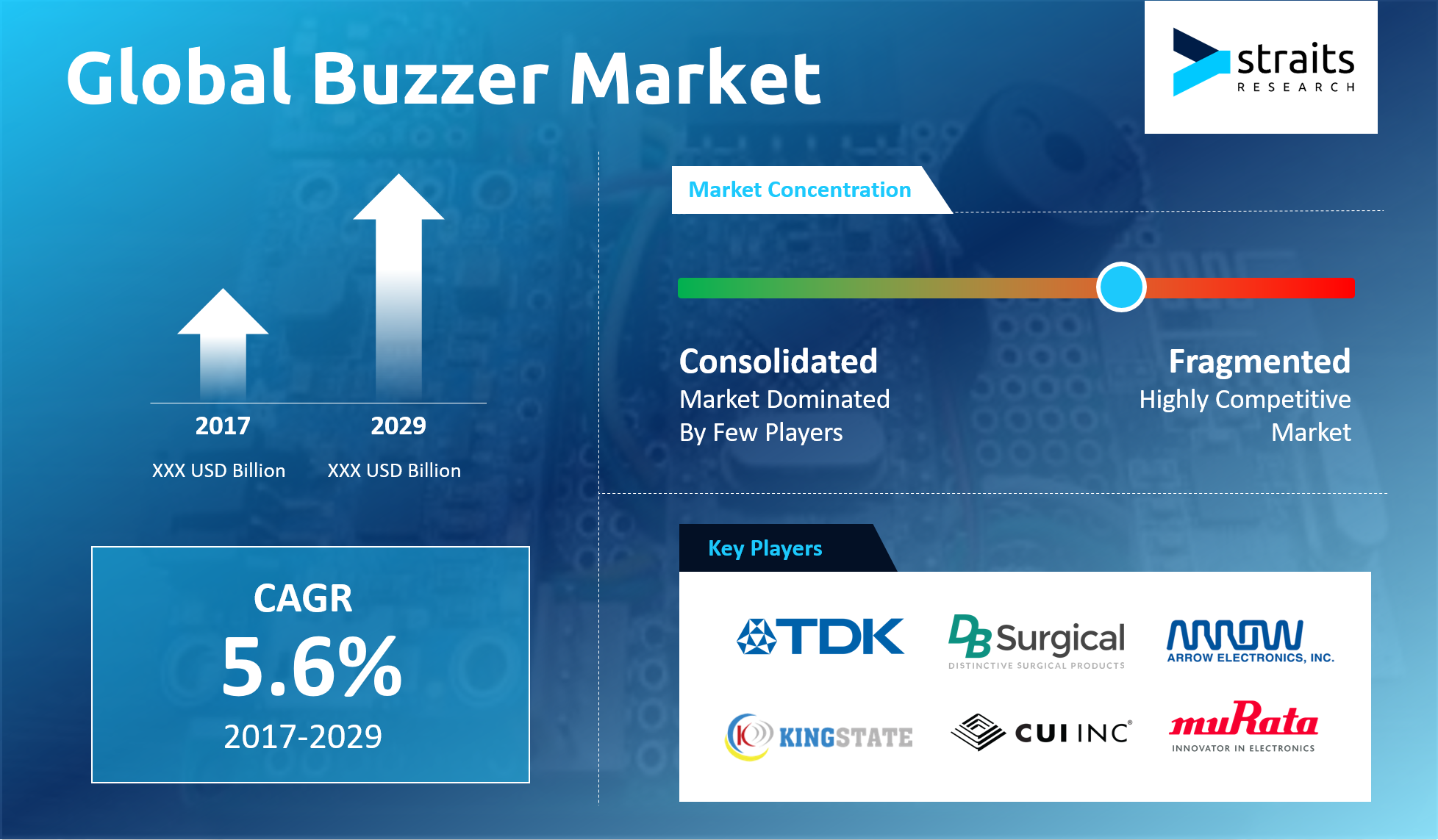 Historic palaces, tourist spots, monuments, museums, and other brick, stone, or marble structures present an opportunity for wireless piezo and magnetic buzzers. The installation of a wired system can prove to be difficult in such delicate structures as drilling is challenging and often damages the structure. Wireless systems are easy to install and operate. Smart technology and automation systems, such as smart locks, smart lights, and smart thermostats, can sync with wireless buzzers, enabling easy monitoring and remote control through an app, email alerts, or text alerts.

The study of the buzzer market primarily emphasizes buzzer type and application in terms of both value and volume. Based on type, the market is primarily bifurcated into piezoelectric and magnetic. Piezoelectric buzzers account for around a 70–73% value share globally, with demand primarily led by the properties that make them suitable for applications in medical devices, warning devices, pressure sensors, sonar equipment, automobile electronics, and computing devices.

Piezo electric buzzers involve a piezo-electric element driven by voltage, so the current consumption is minimum. They can make a variety of pleasant sounds, analog sounds, and intermittent sounds and can serve as musical tone oscillators as they are designed specifically for external excitation.

Based on application, the market is segmented into automotive electronics, home appliances, consumer goods, industrial electronics, and others. Rapid developments in wireless technology areas, coupled with improvements in manufacturing technologies and reductions in prices at higher volumes, are positively affecting market growth in the consumer goods segment. IoT-enabled loudspeakers and microphones have enhanced their traditional role of detecting and producing sounds. They are extensively used in the manufacturing of small consumer durables due to highly enhanced IoT signal carriers.

Industrial electronics applications hold around a 12% value share in the global buzzer market. The segment is projected to achieve the fastest CAGR of 4.0% during the forecast period. Rapid industrialization and worker safety and security concerns are favoring the speedy adoption of piezo and magnetic buzzers in the industrial sector.

Buzzers are prevalent in commercial plants, factories, manufacturing sites, and industrial facilities, where they notify schedules, such as the lunch break or shift changes, to improve productivity and efficiency. There is a growing demand for small size, loud output, and heavy-duty electric buzzers in industrial signaling applications. Manufacturers are designing devices with amplified speakers to produce highly audible tones in production factories and industrial settings with high noise levels.

The global demand for vibrating bells that produce a continuous ringing sound to signal danger is fuelling the adoption of small energy input indoor buzzers. Weatherproof grille-type buzzers are also gaining widespread acceptance where urgent signals are required outdoors. They are used for paging, general alarm, personnel warning, and emergency evacuations. The striker in these buzzers continues to strike repeatedly as long as the current is applied. An increase in the production of cabinet buzzers, exit alarms, flashing lights linked with push-button switches, tornado sirens, and burglar alarms for industrial safety and security is expected to drive the segment’s growth.

Mini buzzers alert users about unauthorized use, theft, or vandalism, and offer protection against intruders. Technological advancements and complexity of the working environment have channeled the development of alarms combined with bright flashing LEDs. These are heavy-duty signaling buzzers mount directly onto a solid surface, with a convenient plug-in connection. They are highly requested for timing, scheduling, and paging applications or wherever a relatively low decibel signal of a different tone is needed.

The global buzzer market is analyzed across five key regions, namely North America, Europe, Asia-Pacific, South America, and the Middle East and Africa. Among all, Asia-Pacific is expected to account for the largest share of the pie throughout the forecast period. 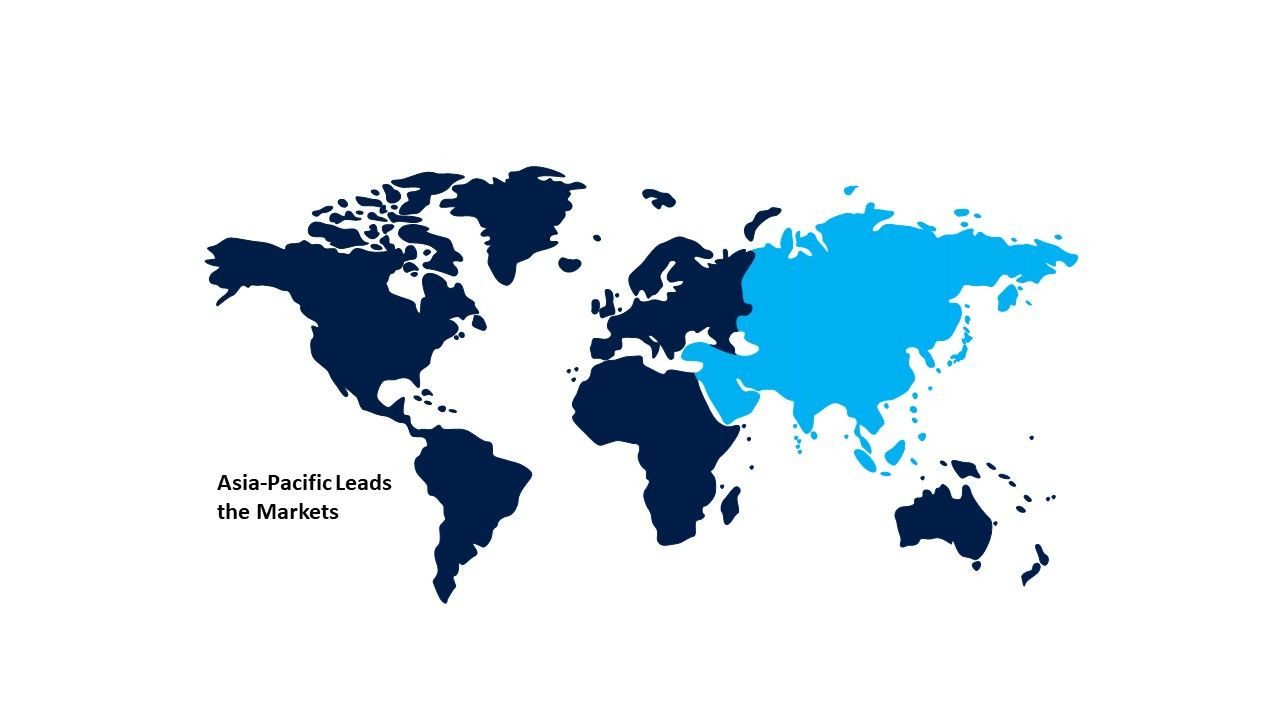 Asia-Pacific dominates the global buzzer market with an estimated value share of 36.47%, primarily backed by its dominance in semiconductor components and equipment manufacturing. Parallelly, the region has also observed colossal growth in the automotive and industrial sectors, with the widespread coverage of electric vehicles, Industry 4.0, and various other technological advancements.

China’s buzzer market was valued at USD 73.7 Million in 2018. The country is home to some of the leading manufacturers and suppliers of buzzers, including Shenzhen Xun Electronic Co. Ltd., Changzhou Jiayuan Electronics Co., Ltd., and Ningbo Best Group Co., Ltd. It is also the largest exporter of merchandise, which further augments its market value.

Buzzers play a vital role in industries such as automotive, aerospace, and industrial machinery in Southeast Asian nations of Indonesia, Vietnam, Thailand, Singapore, Malaysia, and the Philippines. Industrialization has increased mechanization in construction, which is propelling the demand for audio signaling devices such as buzzers or beepers for warning, safety, and security.

Structural requirement, lightweight, and compact designs that fit easily and facilitate the equipment to work effectively are gaining widespread attention in the region’s electronics, aerospace, and marine sectors. Piezo and magnetic buzzers are also gaining popularity in household appliances such as washing machines, dryers, and coffee machines owing to their low power consumption and high durability.

The abundance of mining and mineral exploration sites characterize the South American continent. Brazil also leads in the mining and refining of petroleum products. The extraction of minerals and petroleum from immeasurable depths and ocean beds is accelerating the country’s demand for highly audible and waterproof electronic buzzers and alarms.

A large number of construction sites and over 500 pharmaceutical laboratories and plants in Brazil deploy labor-intensive work, which has further spurred the need for warning and alarming systems to ensure worker safety. The country’s large textile industry and manufacturing of computers, television sets, transistor radios, refrigerators, air conditioners, and other appliances together employ more than 80,000 people in industrial operations across 200 companies.

The adoption of piezoelectric buzzers is likely to increase in some of the country’s busiest and noisiest industry verticals owing to their loud noise and varied tones. Further, the Brazilian government’s move to allow foreign investment in vital industries is also anticipated to augment market value.

Murata Manufacturing—a leading manufacturer and supplier of cutting-edge electronic components, advanced electronic materials, and multi-functional, high-density modules—focuses on product development and innovation for expanding business opportunities and its client base. It provides customized products to satisfy customer needs and more so to build long-lasting customer relations. The company pursues an inorganic growth strategy and seeks strategic mergers, acquisitions, and partnerships for expanding its global network and product portfolio.

TDK Corporation— a key-value shareholder globally —aims to strengthen its growth foundation through investments by means of balanced capital distribution. The company has evolved with the strength of five core technologies since its inception, namely Materials Technology, Process Technology, Evaluation, and Simulation Technology, Product Design Technology, and Production Technology.

TDK has completed several mergers and acquisitions to obtain the required technologies and management resources. Instead of adapting the acquired companies to its operating model, TDK retains its business approaches. The combination of various business models is intended to aid the company’s overall growth.