The global cannabis market size was worth USD 27.28 billion in 2022. It is estimated to reach an expected value of USD 189.89 billion by 2031 at a CAGR of 24% during the forecast period (2023-2031). Cannabis is a genus of flowering plants used for thousands of years due to its widely acknowledged therapeutic and medical properties. Its use in social and spiritual contexts is likewise well documented. Three species predominate C. Sativa, C. indica, and C. ruderalis. Most cultivars developed now are hybrids combining traits from two or more critical species. It is anticipated that the cannabis market will rise during the projected period due to the increasing legalization of cannabis, particularly for medicinal uses.

Increasing medical benefits of cannabis, mainly for chronic pain relief, are driving the legalization process in major countries worldwide. For instance, after Uruguay, Canada legalized the use of cannabis for recreational purposes in 2018. According to the Drug Policy Alliance, Mexico was expected to legalize and regulate cannabis use in 2019. Colombia, Peru, Argentina, Ecuador, and Venezuela legalized medical weed or decriminalized personal use, while Brazil seems unlikely to embrace the recreational use of cannabis beyond its current medical allowance.

In the United States, recreational marijuana use and possession are now legal in 11 states and Washington, DC, as of July 2019. On the other hand, the utilization of cannabis for medical purposes is already authorized in 30 U.S. states. Given the broad desire for cannabis and its therapeutic benefits, more states are predicted to follow suit during the projection period.

In Asia, medical marijuana was legalized in December 2018 in Thailand. In certain parts of India, cannabis use is de facto legalized, and there is a lot of regional innovation. However, the country is far from legalizing cannabis, which may restrict the growth of the cannabis market in Asia-Pacific. Thus, the increasing legalization of cannabis, especially for medicinal purposes, in various countries is anticipated to fuel the development of the market during the forecast period.

Rising Popularity of Cannabidiol in Skincare

Creams and oils with CBD integration, like CBD Body Oil or CBD Face Cream, assist in keeping the skin hydrated and reduce dry skin and the itching and pain that comes with it. Additionally, it has been claimed that lotions and oils containing CBD can be used to treat eczema by encouraging the death of aberrant cells that may be the disease's root cause.

With the popularity of skincare products containing CBD, significant players in the industry have started to enter the market. For instance, L'Oriel and Este Lauder have begun to offer products containing Hemp seed oil. However, the scarcity of clinical research makes it difficult to confirm all the benefits or even determine the correct dosage for treatment. This uncertainty doesn't seem to slow down the increasing popularity of CBD-integrated skincare products.

The rapid growth in demand for CBD skincare products opens a wide-open opportunity for independent brands to gain traction in this traditionally high-end luxury space. As the regulations are becoming more, further research is being conducted on CBD's skincare benefits, which drive the market growth.

One of the significant issues faced by the cannabis industry is banking. Cannabis is legal only in a minority of countries and remains illegal in various countries. Most regulated banks are reluctant to provide banking services to the cannabis market because of the uncertainty this legislative split causes. Cannabis firms struggle to obtain and maintain the same access to financial services as their competitors in traditional retail sectors since banking providers are hard to come by.

It's challenging to get a bank account for anyone working in an industry related to cannabis, including cleaning services, landlords, and consultants. Although several states in the United States have legalized marijuana for medical and recreational purposes, the drug is still regarded by federal law as a schedule 1 substance, along with heroin, LSD, and ecstasy. For fear of federal prosecution, most financial institutions, including banks, Visa, and Mastercard, will not cooperate with the cannabis industry.

In addition, financial institutions providing credits to cannabis-based companies charge them higher fees than usual. For instance, Maryland-based Severn Bancorp charges higher-than-normal fees for cannabis accounts, hitting as much as USD 3,000 to open an account plus monthly payments of USD 1,750. The lack of banking services for businesses is a security issue and a growth restraint for the cannabis industry.

Cannabis contains hundreds of different chemical components, many of which are cannabinoids. Due to the chemical makeup of cannabinoids, which have been related to the treatment of chronic pain, cannabis by-products, such as medicinal cannabis, are frequently utilized to treat chronic pain.

Cannabis can similarly aid in controlling and preventing diabetes due to its effect on insulin. The American Alliance for Medical Cannabis (AAMC) has undertaken research linking cannabis to blood sugar stabilization, blood pressure reduction, and blood circulation improvement. In addition, cannabis use can treat and prevent the eye diseases, such as glaucoma, which increases stress in the eyeball, damaging the optic nerve and causing vision loss. The broad spectrum of health benefits of the plant and the increasing focus on these benefits will propel the usage of cannabis and its derivatives in the future.

The global cannabis market is segmented based on product type, application, compound type, and region.

By product type, the global market is segmented into capsules, concentrates, edibles, and other product types.

The concentrates segment dominated the market and is estimated to register a CAGR of 15% during the forecast period. Cannabis or marijuana concentrate is a concentrated mass containing tetrahydrocannabinol or THC as the main component. Cannabis concentrates are obtained via extraction. Solvents like carbon dioxide, butane, or ethanol extract cannabis concentrate from the cannabis plant. Cannabis concentrates, commonly called dabs, are available in various forms and are referred to by different names like shatter, budder, hash, live resin, and butane hash oil. They are consumed in several ways, such as via a water pipe or vaporizer, cooked in edibles, and rolled in joints. The increasing legalization of marijuana usage mainly drives segment growth over the forecast period.

The edible segment is the second largest. Edible cannabis is available in various forms in the global market. Brands like Diamond CBD Company, Everest, Bearly Legal, Kiva, Coda Signature, and others have introduced edible cannabis in the form of gummies, chocolates, candies, etc. Most cannabis edibles or cannabis-infused food products contain a significant amount of THC. THC-dominant edible cannabis products are mainly consumed for recreational and medical purposes. All such applications drive segment growth.

By application, the global market is bifurcated into medical and recreational.

The recreational segment dominated the market and is estimated to register a CAGR of 14.7% during the forecast period. The growing global demand for cannabis has propelled the need to develop better product delivery systems and sustainable product strains. This need has, in turn, led to many companies coming up with R&D, which extensively investigates several genetic improvement strategies for cannabis. For instance, Hydropothecary partnered with Segra in March 2018 to incorporate plant tissue propagation into cannabis production. This was done to help increase the yield of healthy plants and improve plant variants to serve the growing market for recreational cannabis.

The medical segment is the second largest. Cannabis and cannabinoid drugs are broadly utilized to treat diseases or alleviate symptoms in Australia, Canada, Germany, Israel, Peru, and Poland. In recent years, the involvement of cannabis in several physiological processes, such as blood pressure, appetite stimulation, and nausea and vomiting control, has led to the cultivation of medicinal cannabis across the world. In 2018, 29 nations, including the United Kingdom, Israel, Canada, Brazil, and Australia, approved Sativex, an oral spray made from the cannabis plant containing THC and CBD in a 1:1 ratio to treat spasticity in multiple ways of sclerosis. The synthetic cannabinoids dronabinol and nabilone are authorized for treating nausea and vomiting in AIDS patients and for weight loss in the U.S., the Netherlands, Germany, and Austria. Based on clinical trials, the suggested usage of CBD in medicinal products is 150-1500 mg/day. The medicinal properties of cannabis, increasing advances in genetic development, and intellectual property on cannabis may expand the global market over the coming years.

By compound type, the global market is segmented into Tetrahydrocannabinol (THC), Cannabidiol (CBD), and Balanced THC and CBD.

The Tetrahydrocannabinol (THC) segment dominates the market and is estimated to register a CAGR of 15.1% during the forecast period. Though it is better known for its mind-altering euphoria, THC has significant medical benefits. In December 2018, the United States removed cannabis with less than 0.3% THC on a dry weight basis under the Controlled Substance Act. Therefore, the usage of THC is anticipated to increase in North America. Companies have been extensively venturing into developing genetically-improved high-yielding varieties with better harvestability and market quality, reliably low THC content, and improved herbicide tolerance of the cannabis crop. In the European Union, cannabis with less than 0.3 THC is considered an agricultural commodity or agricultural material. This has led to higher cultivation of cannabis in Europe in recent years. Therefore, the cultivation of cannabis for industrial applications, such as animal feed, woven textile fibers, and building materials, is likely to enhance the market during the forecast period. 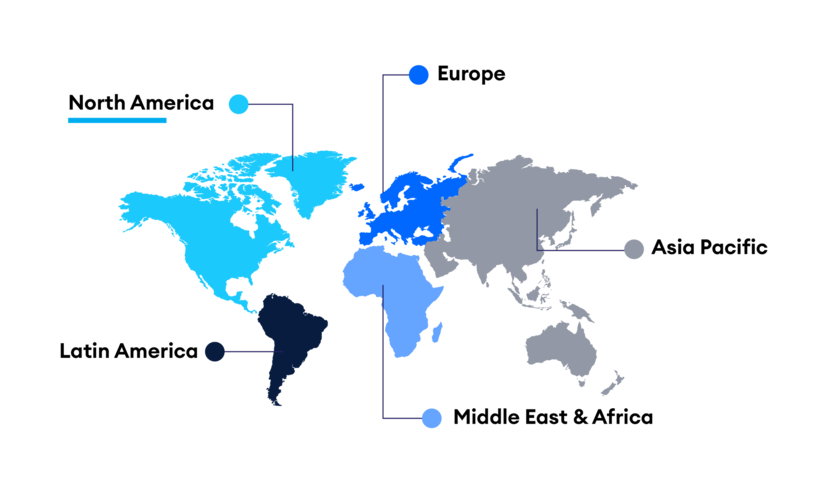 North America dominated the market and is estimated to register a CAGR of 14.5% during the forecast period. Cannabis continues to enjoy widespread acceptance in the United States for recreational and therapeutic uses despite being a psychoactive drug. Till 2020, 15 states and two U.S. territories had legalized the recreational use of cannabis. Thirty-five states and four U.S. territories legalized cannabis for medicinal use. CV Sciences is among the major players in the United States, offering hemp-based phytocannabinoids, such as CBD oil, to the beauty care, pet care, nutraceuticals, specialty beverage, and functional food sectors. Therefore, the increasing instances of legalization of cannabis for medicinal and recreational use by adults are expected to drive the U.S. cannabis market during the forecast period.

South America is the second largest region. It is estimated to reach an expected value of USD 18 billion by 2030 at a CAGR of 13.9% during the forecast period. The leading regulatory authorities with jurisdiction over cannabinoid drugs in Argentina are the Ministry of Health (MoH), the National Comprehensive Drug Policy Department (SEDRONAR), and the National Agency of Medicines, Foods, and Medical Technology (ANMAT). In March 2017, the country legalized the medicinal use of cannabis oils. Still, it maintained an existing prohibition on cultivating plants and possessing seeds by individuals or groups. With 2017 legislation, Argentina joined many South American countries to relax cannabis laws. Therefore, it is anticipated that the market in Argentina will expand significantly over the coming years because of the legalization of cannabis grown for medicinal purposes and new corporate alliances and expansions.

The third-largest region is Europe. Germany authorized medical marijuana in March 2017 to meet the rising demand from patients. Medical cannabis products are only available at pharmacies in Germany, where they are only given as a last resort after the patient has tried all other therapeutic options. The International Narcotics Control Board (INCB) reports that Germany imported around 7.6 metric tons of cannabis flowers, extracts, preparations, and finished therapeutic products in 2018, up from approximately 4.5 metric tons in 2017. Moreover, Germany's demand for medicinal cannabis products is expected to be around 16 metric tons in 2020. The cultivation of medical cannabis in the country is approved based on the tender. For instance, in 2019, Germany's health regulator, the Federal Institute of Drugs and Medical Products (BfARM), allowed companies, Aurora, Aphria, and Nuuvera, to grow a total of 10,400 kilograms of medicinal cannabis over the next four years. This may support the market growth.