Understand the influence of COVID-19 on the Couscous Market with our analysts monitoring the situation across the globe.

Couscous is prepared from crushed durum wheat (semolina), wheat flour, and other ingredients. It is easy to cook and is one of the most versatile ingredients that can be used as a side-dish in several classic recipes. Couscous is a healthy ingredient that possesses antioxidant properties that help to fight inflammation in vitro coupled with control on the level of cholesterol.

Rising demand for multi-functional tasty food, owing to increasing health-conscious people triggering Europe and North America, will drive the market growth for couscous products.  Moreover, the growing base of working women and the 0younger population associated with busy lifestyles across the developing regions, especially in Asia-Pacific and the Middle East, will bolster the overall market growth over the forecast time frame. 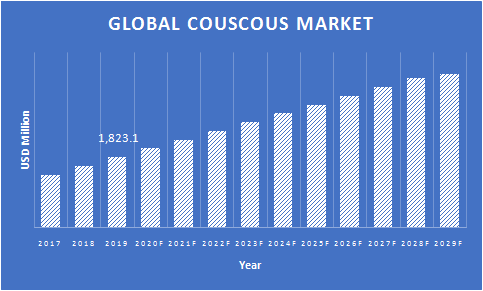 According to WHO, in 2016, more than 1.9 billion adults (39%), who were 18 years or older, were overweight. Of these, 650 million (13%) were obese. Spreading awareness among the population about health consciousness has started using the couscous products for weight loss, owing to its low caloric value, high dietary fiber, and protein content. Increasing diet-conscious population, changing lifestyle, and growing lifestyle prevalence disorders further spur the growth of the global couscous market.

On September 18, 2016, Godrej's Group Nature Basket unit announced the launch of a new healthy alternative that integrates products such as organic grains or cereals and gluten-free products. These were marketed as high and premium food product offerings. Therefore, the introduction of such healthy and premium products by the company will propel the overall market growth.

Among the product type, Moroccan couscous is expected to record the largest market share by capturing 65% of the total market share. Further, Moroccan couscous is a cereal-based product prepared from durum wheat or other variety of cereals such as corn, pearl millet, soft-wheat semolina, and rice-flour. The rising consumer preference for healthy foods towards high obesity levels fosters the growth of Morocco couscous consumption.

Additionally, growing demand for ready-to-eat food products in tandem with wide availability of canned, traditional, frozen, microwavable couscous variants across the Moroccan retail channels further supports the segmental growth. Furthermore, there are several promotional activities conducted for the Morocco population in order to expand the product portfolio that will augment the Morocco couscous segmental growth.

On August 18, 2019, Morocco's couscous, traditional food that is served on Friday, was announced as the unofficial symbol of Morocco. Moroccan couscous is associated with the country's renowned hospitality. The Moroccan meal is enjoyed by the tourists and travelers, coupled with celebrities for the Morocco couscous meal. The major importers of Moroccan couscous involve the U.S., Canada, Brazil, France, the U.K., Netherlands, Spain, Italy, Japan, and Australia.

The coarse durum wheat flour, also known as semolina flour, is extensively used in the preparation of pasta. Additionally, it is also used in the manufacturing of bulgar and noodles, and this 100% durum wheat semolina is most prominently used in the African and Middle Eastern countries.

The global couscous market is segmented into North America, South America, APAC, Europe, and the Middle East and Africa 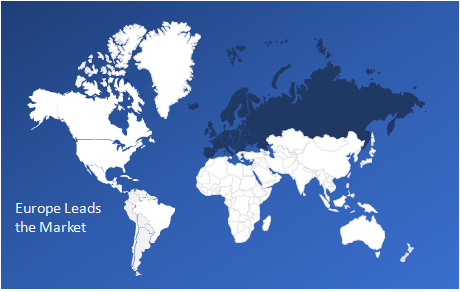 Europe is anticipated to dominate the overall couscous market in the forecast period. This can be attributed to a large base of consumers preferring dietary healthy foods and supplements. Moreover,   European consumers are paying more attention to a healthy diet such as superfoods, healthy snacks, vegan products, functional foods, and gluten-free products.

In 2018, the amount of couscous produced in the E.U. grew at a steady rate of 3.6%. According to the EU, France remains the largest consuming country in Europe comprises of approx. 43% of the total consumption.  Moreover, couscous production in France exceeded the figures in 2019 as the region recorded the second-largest production of couscous.

Additionally, major players have included a wide range of organic products in the product portfolio. However, the European Commission has introduced a food safety policy that underscores human health and food safety. E.U. country appoints control bodies and authorities that inspect operations in the organic food chain.

North America to be the Second Leading Region

North Americans countries such as the US, Canada, and Mexico utilize high amounts of couscous in preparation of pasta. For records, on July 1, 2016- Kraft Heinz launched children pasta shape and sauces. Therefore, the consumption of the couscous is on the rise in the North American region. Due to considerable growth for the application of couscous in a wide range of food products, manufactures have launched an extensive range of new products that involve organic, gluten-free, flavored, and instant couscous to the market. Currently, in the United States, it has been witnessed that there is a high demand for organic couscous and gaining high popularity among the health-conscious population, and manufacturers are trying to address the situation. But, the manufacturers have to get product approval from the U.S. department of agriculture. The U.S. Department of agriculture offers standards to describe the specific requirements that are further verified by a USDA accredited certified agent before the product gets labeled as USDA organic. These organic standards are comprehended in the Organic Food Production Act, USDA organic regulations, and the National Organic Program Handbook.

On August 28, 2019, Ebro Foods purchased the premium rice brand Tilda. Through this acquisition, Ebro not only expanded its portfolio of global premium brands of the company but also acquires a strong foothold in the British Market. Moreover, Ebro's acquisition with Tilda international nature will enhance the extensive development of other group products.

How much is the Couscous Market Worth in the future?

Which is the leading segment in the Couscous Market?

Moroccan Couscous Product Type segments is expected to be leading segments in Couscous Market during the forecast period.

What was the value of Global Couscous Market in 2018?

Which region is expected to hold the highest market share in the Couscous Market?

Europe is expected to hold the highest market share in Couscous Market,

What is the key factor driving Couscous Market?

Demanding of organic cereals is the key factor expected to drive the Couscous Market during the forecast period.

Who are the active players in Couscous Market?