The global data center infrastructure management (DCIM) is a part of the building information modeling software. The central database in the data center has enabled accurate record-keeping and processes, enabling a fully integrated workflow with continuous monitoring to keep tabs on circuits failure, efficient energy management, and easy utilization. Further, its incorporation in the small and medium enterprises (SMEs) and large enterprises have made it even more prevalent in the marketplace.

The Global Data Center Infrastructure Management Market is expected to grow at a compound annual growth rate (CAGR) of 26% in the forecast period. 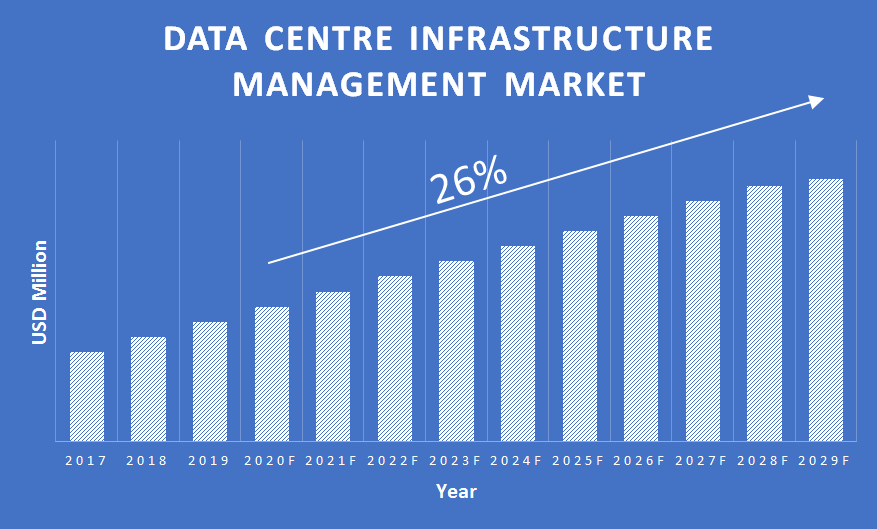 The rising utilization of the data centers for the continuous supply of services such as storage drives, network, and servers, among others have increased the need for electricity. As per an article published by the Energy Innovation, some of the largest data centers located in the United Nations are estimated to utilize more than 100 MW (megawatts) power capacities in the year 2020. Alternatively, this power can be utilized to light more than 80,000 U.S. households. Additionally, it also states that the rising Co2 emissions from the overutilization of energy is also a matter of concern. Further, the initiation of Green IT has led to a reduction in the power utilized by the IT industry as the prominent companies are investing in renewable energy sources, reduce their environmental impact. For instance, as of 2018, tech giants Google and Apple utilized 100% renewable 10TWh and 1.3TWh, respectively. Further, Facebook consumed 75% renewable 3.2TWh and, Amazon and Microsoft used 50% of the renewable power source. Thus the inclination towards Green IT and sustainability has fostered the growth of the data center infrastructure management market.

The advent of digitalization has brought forth a tremendous surge in the number of internet users due to the rising government initiatives and seamless network connectivity, leading to a substantial data flow. For instance, as per the International Telecommunication Union (ITU), 53.6% of the total population uses the internet, which is a two-fold growth in a decade. Further, the rising government initiatives such as the Digital India Campaign by the Government of India, the National Broadband Plan by the Government of Brazil, Digital Economy Promotion Agency by the Government of Thailand, and others have aided in the colossal rise of the internet users in the recent times. Additionally, the high dependence of most of the companies on cloud computing has favored the datacentre infrastructure management solutions as a transformation of the servers to the cloud is likely in the upcoming years. As per a report named “Cloud Computing and its Operations (May 2018)” published by CompTIA Inc., 91% of the companies use cloud computing in some form or the other. Further, the advent of emerging technologies in developing countries has led to increased investments by multinational companies, thus raising the need for data center infrastructure management. 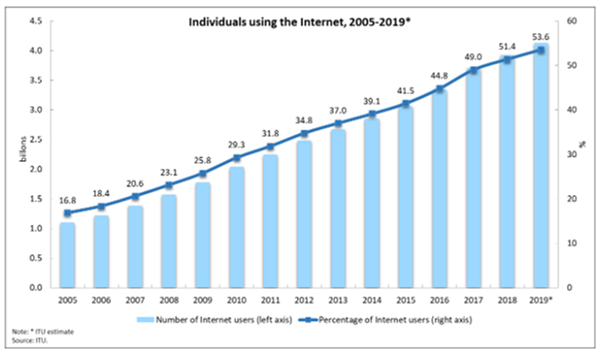 The setting up of servers in data centers has proved to be beneficial in terms of capital expenditure and power utilization charges, but the rise in costs has restrained the growth of the market. This rise is mainly due to the increased need for services such as the growing commutation of the engineers for its better operability, data security concerns, and challenges due to increased dependence on the data center facilities. Additionally, the rising incidents of data breach have hampered the growth of colocation data centers. For instance, in February 2020, the Defense Information systems agency of the United States announced that it suffered a data breach. In September 2019, Airbus revealed that hackers targeting commercial secrets were engaged in a series of supply chain attacks targeting four subcontractors within the company. The aforementioned incidences have played a major role in restraining the growth of the market.

The pandemic has caused a lockdown in almost all the countries of the world, where social distancing has urged the need for complete work from the home implementation by the companies. As a result, data centers have come to play an important role in maintaining the IT infrastructure of the companies functional during this crisis. The emergence of new business has led to higher adoption of the network technologies to fulfill the basic requirements, thus favoring the growth of the datacentre infrastructure management market.

The software segment holds the maximum share due to its ability to improve infrastructure planning and design and run efficient data center operations. It is further segmented into asset management, network management, cooling management, power management, and security management. The asset management sub-segment primarily deals with the complete information of the assets such as servers, networking, and storage. The cooling management segment, on the other hand, also holds a substantial share; as per an article published by Energy Innovation, 43% of the power is mainly consumed by the cooling management segment. Further, the services segment includes installation and integration, managed, and consulting services. The services segment also holds a significant share in the market, owing to the complex structure of the data centers that prompts the need for skilled services.

The colocation segment caters to the maximum share, owing to its eminent features such as availability of massive space, presence of backup generators/ battery backups, high level of physical security, and efficient cooling systems, among others. Additionally, the colocation data center helps in eliminating the capital expenditure due to its placement in the common renting space at a third party’s data center. This type of deployment is predominantly observed in the new SMEs with storage issues and a constrained budget. Further, the on-premise deployment also holds a moderate market share, mainly from large enterprises where the security of the data is of utmost importance.

North America dominates the data center infrastructure management market due to the presence of notable companies such as CA Technologies, Emerson Electric Co., Fieldview Solutions, International Business Machines Corporation, iTRACS Corporation, Inc, JouleX Inc. Modius, Inc, nlyte Software, Ltd, Panduit Corp., and Rackwise, Inc., among others. On the other hand, the region has a penchant for technology; for instance, as per the ‘CISCO Annual Internet Report, 2018’, the number of internet users in the region is expected to be 92% of the total population by 2023. Further, according to the “Technology and Innovation Report 2018” published by the United Nations Conference on Trade And Development, the U.S. ranks the highest in the Global Competitiveness Index developed by the World Economic Forum. Mexico has also been one of the top countries in this index. It encompasses the innovation capacity, companies spending on research and development, government initiative, quality of scientific research, and so on, thus bolstering the growth in this region. 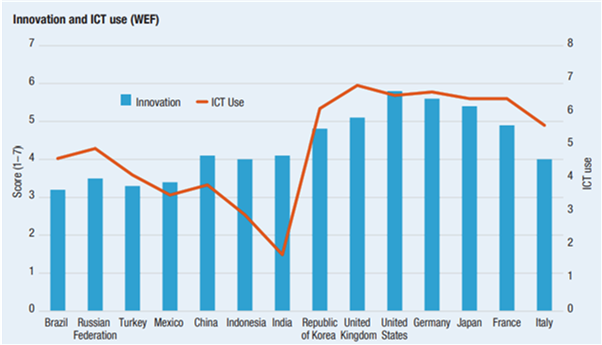 Asia-Pacific is considered to be one of the fastest-growing regions on account of the favorable government regulations that have led to digitalization. For instance, the Digital India Campaign launched by the Government of India, the Digital Economy Promotion Agency by the Government of Thailand, among others. Additionally, the rising government initiatives such as Make in India by the Government of India and government investments such as the USD 21 billion funds set up in November 2019 by the Chinese government to support manufacturing tech has fostered the growth SMEs in this region. Further, the increasing growth opportunities in the Asia-Pacific region are mainly due to the year-on-year growth of the GDP in this region. As per the report named ‘Economic Social Survey’ by United Nations Economic and Social Commission for Asia and the Pacific (UNESCAP), the average GDP growth in Asia-Pacific is higher than the rest of the world, thus bringing forth substantial investments in the industries. These opportunities have flourished the markets of this region, thereby strengthening large enterprises and SMEs and further propelling the data center infrastructure management market growth.

By Size of the Data Center

Which is the leading segment in the Data Center Infrastructure Management Market?

Software Segment is expected to be the leading segment in Data Center Infrastructure Management Market during the forecast period.

Which region is expected to hold the highest market share in the Data Center Infrastructure Management Market?

Who are the active players in Data Center Infrastructure Management Market?

How much is the Data Center Infrastructure Management Market worth in the future?

The Global Data Center Infrastructure Management Market is expected to grow at a compound annual growth rate (CAGR) of 26% in the forecast period.