In today’s digital era, the constant evolution of data in terms of both type and size and the adoption of social media and mobile applications have given rise to a large amount of unstructured data (images, videos gifs, and others). This transformation in data structure has engendered the need for efficient storage and computing functionalities.

SSD technology has emerged as a replacement for HDD technology. Built-in power loss protection is a key factor that drives the demand for SDD technology, as power loss can lead to data corruption and loss, halting other business operations. SSD deployed in data centers are designed specifically to ensure data protection in case of such incidents.

The significant fall in overall NAND prices has ultimately reduced the price of SSD technology, which is another factor spurring market growth. It has been estimated that NAND prices will fall by 50% in the current year, primarily owing to rapid expansion in various foundries, which has pushed to cause a decline in the overall SSD prices.

Based on interface technology, the market is segmented into SATA, SAS, and PCIe technology. The PCIe segment dominates the data center SSD market and accounted for around a 70–80% share during 2018–2019. PCIe is gaining traction in high-performance computing environments for both client and enterprise storage purposes.

As mentioned earlier, a rapid collapse in the price of NAND flash memory has contributed to reducing the price gap between PCIe and SATA-based solid-state drives, which is further projected to create a profitable scenario for PCIe technology. As per our analysis, this price drop of NAND flash drives is projected to surge SSD shipments by 25–30%, with PCIe estimated to emerge as one of the leading segments with the potential to gather a market share of around 35-45% during the forecast period, 2019–2026.

The integration of an analytics-based model in the current working environment has created a strong demand for higher computing infrastructure. IoT-based projects are witnessing an upward trend in the industrial space, favoring the need for higher computing facility including data center/cloud capacity. The below figure portrays the growth of the industrial IoT market, which primarily creates demand for data centers, which in turn provides a channel for the growth of SSD usage in data centers. 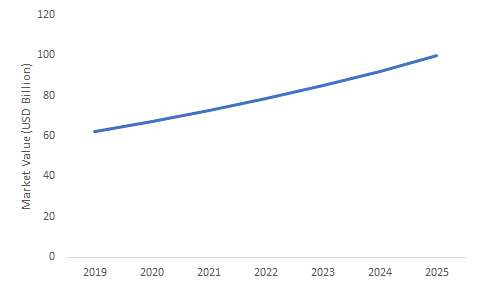 Fog computing is turning out to be a game-changer in the market by transitioning the focus from idle storage to effective computing and networking along with the model from cloud to things. Some of the key factors boosting the growth of fog computing are the immense adoption of real-time analytics solutions, followed by reduced network backhaul cost and increased application reliability. Further, cost reduction is one of the key takeaways of this technology.

Asia-Pacific — One of the Most Prominent Markets With Strong IT Infrastructure, a Large Number of Data Centers, & a Massive Consumer Base for Digital Products & Services

The need for higher efficiency and performance in computing, coupled with the growing number of data centers globally, drives the growth of the data center SSD market. Asia-Pacific holds a tremendous growth opportunity in the data center market, supported by an expanding consumer base for the wide variety of digital products and services harnessing high computation infrastructure facilities and services. Southeast Asia particularly represents significant potential.

Indonesia: In Indonesia, the number of data centers has been growing 5–6% YoY since the last few years. Some of the key factors imparting to Indonesia's growth momentum are:

Rest of Southeast Asia: Solid IT infrastructure and steady power supply have seen a number of multinationals, such as Google, Amazon, and Microsoft, relocate their data centers in Southeast Asia. Alibaba’s announcement of plans to launch data centers in the region further cemented the trend in 2019. Other players are also seeking a foothold in the region to prevent Alibab from achieving a monopoly in the market.

The growing adoption of cloud-based services and IoT, coupled with the rising number of mobile users, has rocketed the demand for data centers for the management of the colossal volume of data generated by these applications. However, the one adverse impact of this positive trend is the massive consumption of electricity, as these regions mostly rely on fossil fuels for power generation. To tackle this, government bodies have adopted certain measures to optimize energy usage. The table below lists some of these measures.

These measures emphasize storage and computing technology — a core component in server infrastructure. SSD consumes less power than HDD due to the lack of mechanical parts; it consumes less than 5.24 watts.

Africa is pegged to be a prominent market for data centers with significant growth prospects in the future. Thus, the region has significant scope for SSD consumption. Preference toward the adoption of cloud-based solutions by enterprises and the growing requirement of carrier-neutral and open access data centers for business-critical applications are the key drivers for market growth in Africa.

Investments in Africa’s data center infrastructure are increasing. For instance, in October 2018, Amazon Web Services announced its decision to open data centers in South Africa by the first half of 2020. Similarly, Microsoft also opened two data centers in Cape Town and Johannesburg in 2019. Such investments are also creating intense competition among the key global market participants looking to gain a foothold in the region.

On the flip side, the regional market faces rack space, power, and connectivity challenges. Additionally, fiber connectivity market structure and pricing pose a critical hurdle to growth, particularly in Nigeria. 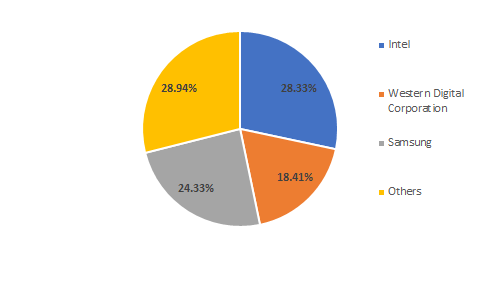 Intel Corporation dominates the data center SSD market with the most substantial value share. Technological breakthroughs are the key factor contributing to the company's eminent market position. For instance, Intel has integrated a virtualized memory drive technology in partnership with ScaleMP, a leader in high-end virtualization software. The technology has successfully lowered acquisition cost and enabled larger system scaling for high-end applications, expanding the system memory of the workstation by 8x the installed DRAM.

What was the value of the Global Data Center SSD Market in 2019?

What is the key factor driving Data Center SSD Market?

Which is the leading segment in the Data Center SSD Market?

PCIe Type Segment is expected to be leading segment in Data Center SSD Market during the forecast period.

Which region is expected to hold the highest market share in the Data Center SSD Market?

Who are the active players in Data Center SSD Market?