The growing prevalence of contactless payments and the launch of digital wallets by many global players have led to a decline in the use of physical currency. The safety and transparency of digital currency accelerate its popularity around the world. Many countries are investing in related R&D and expected to launch their own digital currencies during the forecast period. The below chart lists which entity is authorized to make currencies within a country.

Impact of COVID-19 on the Digital Currency Market

The COVID-19 pandemic has forced governments to close down inter-nation, inter-state, and even inter-city borders to promote social distancing as a measure to stop the spread of the disease. The WHO warns cash and bank cards may also aid disease transmission, and at present, digital payments offer the safest option. Hence, many are opting for online transactions, especially as retailers are refusing hard cash.

The pandemic has redirected authorities’ attention toward the expansion of online payment systems and contactless cards. Countries such as the U.S. and China are planning to promote electronic cash to fight against the spread of the deadly pathogen. Businesses and governments in the regions are significantly investing in digital currency because it cannot be misplaced and is widely accepted by business officials. The robust infrastructure of the U.S. financial market for electronic money facilitated through Visa and MasterCard, and China’s recent announcement of electronic Renminbi (e-RMB) are a couple of the best examples in the current scenario.

Ease of transaction and reduced dependency on the physical cash significantly drive the digital currency market growth. Cybercrime and data hacks remain among the primary concerns in the effective and smooth running of automated financial infrastructure systems. However, the current pandemic and the uncertainty of what’s next, have created an unavoidable need for contactless payment infrastructures worldwide. Pressures to revive businesses once the lockdowns subside are expected to put severe strains on international trade relations. Tensions and panic are anticipated to spur the demand for improved financial architecture that can fill in gaps and promote economic growth.

China is expected to emerge as one of the global pioneers in the digital currency market after launching its digital currency, e-RMB. The People’s Bank of China (PBoC) has already been working on the project since 2014. The electronic cash is also being paid as salaries to government employees and being tested at food and retail stores to promote contactless monetary transactions, even without an internet connection. The technology will soon wipe out any form of physical money as social distancing is here to stay. American lawmakers have also included a digital dollar solution for distributing federal handouts in its initial versions of COVID-19 support legislation. Facebook’s Libra, is another prominent example in the Digital Currency Electronic Payment (DCEP) sector.

The current COVID-19 crisis is inadvertently serving an opportunity for nations to follow the leading economies and subsequently transform their traditional banking systems to a new direct peer-to-peer exchange with limited or no human involvement. Furthermore, this automated system is expected to expand at a rapid pace, aided by the rollout of 5G and consumer acceptance as people have started to realize the importance of social distancing.

The IT solutions segment by technology is expected to observe a significant growth in the digital currency market owing to the ease of use, low deployment cost, and mobility these solutions offer. Innovative technologies, such as cloud computing, big data analytics, digital stores, and social networks, are allowing banks, consultancies, firms, and businesses to expand their visibility and presence in the market.

Governments and enterprises are realizing the benefits of contactless payments in this difficult hour, which include reduced transaction time, increased revenue, improved operational efficiency, and minimized operating costs. Mobile payments have helped accelerate the transaction process and reduce counter queues as more and more people opt for online shopping from their designated places. Banks and FinTech institutions are partnering with digital currency networking processors to issue network cards facilitating electronic transactions from bank accounts to merchants. Prepaid cards and digital wallets are allowing users to deposit fiat currency for electronic money. Companies are expected to charge a small percentage on the amount withdrawn from accounts or converted from electronic money back into fiat currency.

China plans to roll out a virtual money payment system with its official digital currency (e-RMB) in view of the COVID-19 pandemic and its after-effects, with an aim to target the dollar as a global reserve currency. As per the Digital Currency Research Institute of the People's Bank of China (PBoC), China’s R&D on official digital currency is proceeding steadily, with many internal pilot tests being carried out in the region. The payment tool is tested within banks and some end-users to primarily ensure security and stability. It is soon expected to spread to a wider range of consumers with supportive technology.

China has also hinted at the future trials of its digital currency on telecom companies with 5G. As per the South China Morning Post, the total size of China's digital currency in the next few years could reach USD 140 billion. The current market capitalization of cryptocurrencies, including bitcoin, stands at approximately USD 200 billion. After the successful trial stage, China plans to immediately integrate digital currency into hundreds of blockchain projects, in which information can be easily exchanged through autonomous digital sensors in devices. In addition to this, the country plans to automate an entire Internet of things (IoT) ecosystem and offer DCEP-based direct payments along its global Belt and Road Initiative (BRI), bringing about healthy economic growth.

The below chart represents the historical exchange rate of the U.S. Dollar to the Chinese Yuan.

Reasons to launch the e-RMB 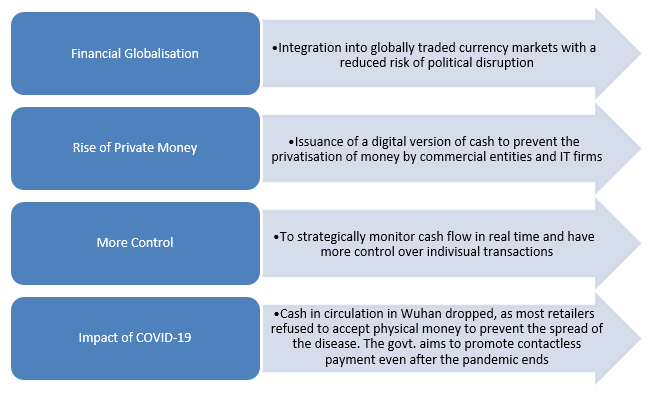 Rest of the World (RoW)

Who are the active players in Digital Currency Market?

Which is the leading segment in the Digital Currency Market?

IT Solutions Technology Segment is expected to be the leading segment in Digital Currency Market during the forecast period.

Which region is expected to hold the highest market share in the Digital Currency Market?

What is the key factor driving Digital Currency Market?

Ease of transaction and reduced dependency on the physical cash, growing prevalence of contactless payments are the key factors expected to drive Digital Currency Market during the forecast period.