The emergence of technology is revamping the business sector. Businesses need to hinge on data analysis to obtain real-time insights. Breakthrough technologies such as the Internet of Things (IoT), artificial intelligence, and others are penetrating every aspect of business and subsequently adding the data traffic. Complementarily, usage of the internet and the preponderance of smartphones are underpinning the burgeoning data traffic. Considering the complexities of this voluminous data, data management is a pressing need. As per the analysis conducted by Cisco in November 2018, IP traffic will increase by 4.8 zettabytes per year by 2022, threefold of 2017 rate. 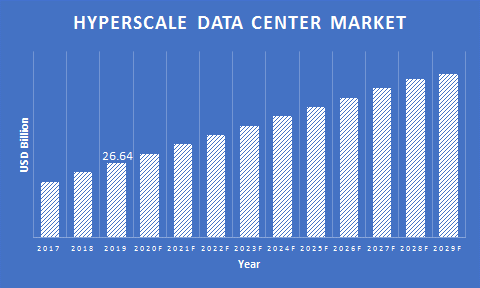 The aforementioned scenario is weighing down the effectiveness of the present computation model. Hyperscale computing springs into this state of play, the term itself hints at the ability to scale to manage data painlessly. According to the Cisco Global Cloud Index, the number of hyperscale data centers is expected to increase from 399 in 2018 to 485 by 2020.

The demand for high-performance computing in on the rise across all commercial sectors. Hyperscale data centers are playing a pivotal role in performing expeditious research and development activities and thus gaining valuable insights. In April 2017, the City of Hope medical research and treatment center adopted HPC systems as a cost-effective method to accelerate GPU in the drug discovery process. As per the study conducted by the International Energy Agency in 2019, there are around 470 hyperscale data centers around the world. Traditional computation models fail in the processing of such colossal data, thereby raising the need for hyperscale computation models and solutions. Smart devices and solutions are expected to produce one-tenth of the total data on earth, reaching up to 44 Zettabytes by 2020.

The technology, to some extent, trails behind in the face of a lack of benefits for achieving a fully operational system. Some of them are mentioned below

As higher bandwidth introduces challenges in managing signal integrity, advancement in optical networking technologies acts as a solution to overcome the above-mentioned issues. For instance, the adoption of integrated chipsets prevents the need for a driver in the optical assembly, thus optimizing the cost and size of the hardware.

Effective Cooling Solution is Imperative to Avoid Overheating of Servers

High demand for fast and efficient computing capabilities, primarily due to the adoption of advanced technologies such as blockchain, artificial intelligence, image processing and others in all commercial sectors, has resulted in massive power consumption. This has eventually led to the heating of electronic server components, generating a heavy load on the servers. As the present business model depends upon the constant in-flow of data,  server damage and other intricacies in data availability are bound to result in severe economic losses. Hence, an effective cooling solution is the need of an hour. According to the U.S. Department of energy, in 2017, data centers in the U.S. consumed about 70 billion kWh, accounting for 1.8% of total U.S. electricity consumption. This heat must be adequately dissipated to ensure the overall efficiency of the system.

The colocation providers segment is foreseen to experience a fast growth rate due to its cost-effective edge, where an enterprise has to pay only for the resource opted, such as equipment, space, and bandwidth. A study conducted by the Uptime Institute Data Center Industry Survey of 2016 stated that more than 20% of all IT assets are located in colocation data centers. Moreover, 43% of the total colocation space is found in the North American Continent. Government data center facility is evolving in terms of size, location, and capabilities, thereby presenting opportunities for colocation providers. With colocation facilities, government organizations are seeking to reduce system complexity and augment energy efficiency.

In  Canada, the hyperscale data center market is witnessing surging growth due to Québec's competitive electricity rates in tandem with Montreal’s flourishing tech industry landscape, which has made the city a cloud computing destination. Québec offers low cost ranging up to USD 2.39/kWh for power consumption for data center transmission and distribution. This factor has stimulated the emergence of new companies in the region. In January 2019, Vantage Data Centers announced the entrance in the Québec hyperscale data center market, with the acquisition of 4Degrees Colocation and its two data centers from Videotron Ltd. for USD 200 million.

Influx of Investment in the Nordic Region

In Europe, the Nordic region holds an untapped opportunity for hyperscale cloud and data center segments. Primary factors influencing the growth of hyperscale data centers in the region are listed below 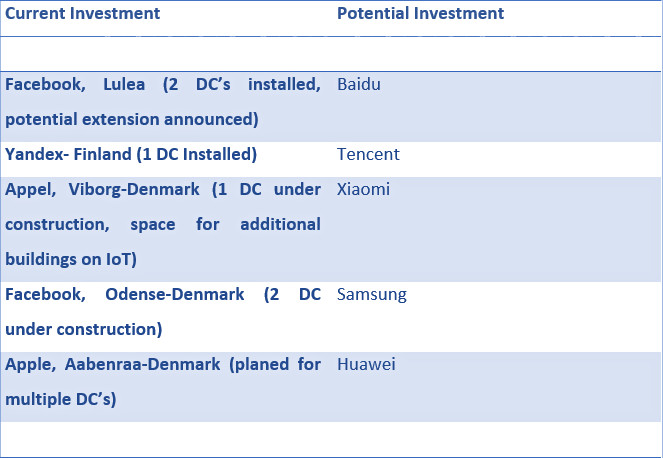 The growing significance of the “data localization” concept among various countries in the Asia-Pacific region, especially for strengthening data protection, is positively influencing the hyperscale data center market. The IT infrastructure in Asia-Pacific is skyrocketing, thus prompting the need for efficient hyperscale data centers. Indonesia, Vietnam, China, and others are some of the countries that are focusing on storing citizen and consumer data locally. Increasing investments by hyperscale data center providers in the Southeast Asian countries alongside strict data localization regulations is stimulating the overall market growth. Vibrant software startup eco-system and Industry 4.0 transformation smoothened the entry for new market entrants. In October 2018,  Vietnam initiated a new cybersecurity law that mandates the company to analyze or process personal data of a citizen and store it within the country. The construction of the first green hyperscale data center by Andhra Pradesh government in Visakhapatnam points at the interest among the government bodies for the hyperscale data center. Adani Group proposed to lead the project and support the development of the digital and energy infrastructure in the state by investing over Rs 70,000 crore in the duration of 20 years. Indonesia challenged Singapore’s dominance in the hyperscale data center market by a rapid increase in the number of investments by business giants such as Google, Alibaba, Amazon, and others. These prominent companies have invested around USD 1 billion in the country’s data center projects for the last two to three years. A strong presence of the mobile startup sector in the country is concurrently establishing the demand for cloud and internet-based technologies. This has opened gates for companies to expand their presence globally. In June 2019, Alibaba opened its second data center facility in Indonesia, thereby doubling its local capacity and coverage across 19 regions. The company is striving to capture the country’s local market by providing service to small and midsize startups.

Intense focus on strengthening core workload services by key players such as Alibaba Cloud, Amazon Web Services, Microsoft Azure and others for directly connecting strategic business partners and the customers has ignited a fierce competition among the data center technology companies. A joint venture established in July 2019 between Equinix and GIC corroborates the intensity of the competition. Deployment of hyperscale infrastructure through Equinix data center platforms will attract more partners and other hyperscale vendors. The trigger behind this is the strong feature of equal workload distribution feature, which propels the data center efficiency.

Who are the active players in Hyperscale Data Center Market?

How much is the Hyperscale Data Center Market worth in the future?

Which is the leading segment in the Hyperscale Data Center Market?

Cooling Solution Segment is expected to be the leading segment in Hyperscale Data Center Market during the forecast period.

Which region is expected to hold the highest market share in the Hyperscale Data Center Market?

What is the key factor driving Hyperscale Data Center Market?

Rise demand for high-performance computing, increase adoption of advanced technologies, the growing significance of the data localization is the key factors expected to drive Hyperscale Data Center Market during the forecast period.

What was the value of Global Hyperscale Data Center Market in 2018?