Understand the influence of COVID-19 on the Krill Oil Market with our analysts monitoring the situation across the globe.

Krill oil is derived from crustaceans (called krill) that look like shrimp. Mantas, Baleen whale, and shark primarily eat krill. Krill oil is rich in omega-3 acids and contains two of the same essential fatty acids as fish oil — eicosapentaenoic acid (EPA) and docosahexaenoic acid (DHA). The krill containing EPA and DHA have more bioavailability compared to fish oil as much of the EPA and DHA in krill oil are linked to phospholipids. Krill oil is also known by the name Aceite de Krill, Euphausia Superba Oil, Antarctic Krill Oil, and others.

Krill oil has gained popularity among consumers from the last few years. For years, people have been taking fish oil supplements for the essential fatty acids contained inside, but now more and more people are inclining towards krill oil as an alternative. Krill oil has various health benefits as it is rich in omega-3 fatty acids EPA and DHA. Krill oil is used to improve heart health and fight inflammation. It also contains a higher amount of astaxanthin (a carotenoid pigment that gives krill and other crustaceans their characteristic red-pink color). Astaxanthin support brain and nervous system health. As per the Alternative Medicine Review, a daily dosage of 1 to 3 gm of krill oil was found to be effective for the reduction of total cholesterol, triglycerides, Low-density lipoprotein (LDL) cholesterol, and increasing of High-density lipoprotein (HDL) cholesterol levels. In addition, as per the study of the Journal of the American College of Nutrition, krill oil supplementation is effective at reducing symptoms of rheumatoid arthritis and C-reactive protein (a marker of inflammation). Moreover, krill oil is used for high levels of certain blood fats, stroke, osteoarthritis, cancer, depression, premenstrual syndrome (PMS), and painful menstrual periods. These health benefits of krill oil are expected to drive the market during the forecast period. Also, the increasing health-conscious demographic is an essential factor that is likely to impact the krill oil market positively.

Krill Oil Emerging as a Replacement for Fish Oil

By type, the krill oil market is segmented into capsules, soft gels, and liquids. Among the product type capsules segment accounts for the highest share in the krill oil market.  The growth of the capsules can be attributed to factors such as ease of taking fix quantity of the supplement, protection from sensitive ingredients, oxygen barrier, reduction of gastrointestinal irritation among others.

By application krill oil market is segmented into dietary supplements, animal feed, functional food and beverages, pharmaceuticals, among others. Among the application segment, the dietary supplement segment is the dominating segment owing to the increasing health consciousness among consumers and increasing fitness trends across the globe. The gym-goers are extensively using such supplements to build their muscles, krill oil fish oil among other omega-3 supplements are extremely popular among fitness enthusiasts. But, the demand for krill oil is increasing among fitness enthusiasts owing to its numerous benefits over other supplements such as fish oil.

A Large Number of Cardiovascular Patients in North America

Krill oil is popular in the western regions, owing to the sizeable health-conscious population. North America is a significant region for the krill oil market; the region accounted for around 23% of the share in the global krill oil market in the year 2019. The high consumption of krill oil in North America is due to the presence of a large number of cardiovascular patients. In North America, krill oil is incorporated in the supplements, functional foods, pharmaceutical products, and infant formulas. Besides, rising consumer’s inclination toward health and fitness in the U.S. and Canada is anticipated to drive product demand in dietary supplements and functional foods.

Asia-Pacific is also an important marketplace for krill oil. The increasing cultivation of krill fish in the Indian Ocean and the South China Sea is expected to drive the market during the forecast period, 2020–2029. Moreover, the incorporation of omega-3 fatty acids in the daily diet, owing to the increasing health awareness among consumers, is augmenting the demand for krill oil in the region. Also, the utilization of krill oil in pharmaceutical products, coupled with growing R&D activities, is expected to drive the market in the region. The growth of the krill oil in Asia-Pacific is predominantly driven by the increasing demand for the product from the countries such as India, China, South Korea, Japan, and Australia. 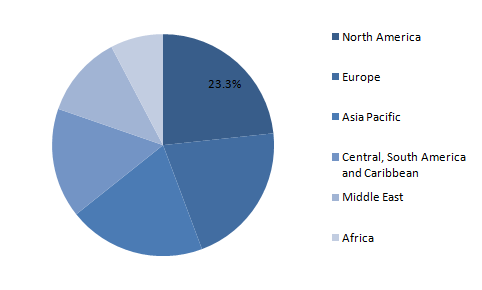 Central, South America, and the Caribbean

What is the key factor driving Krill Oil Market?

Rising consumer’s inclination toward health and fitness, utilization of krill oil in pharmaceutical products, coupled with growing R&D activities are the key factors expected to drive Krill Oil Market during the forecast period.

Who are the active players in Krill Oil Market?

Which region is expected to hold the highest market share in the Krill Oil Market?

Which is the leading segment in the Krill Oil Market?

Dietary Supplement Segment is expected to be a leading segment in Krill Oil Market during the forecast period.