Understand the influence of COVID-19 on the Neurostimulation Devices Market with our analysts monitoring the situation across the globe.

Neuromodulation, also known as neurostimulators, is a mechanism that allows the use of implantable medical devices for medicinal purposes to modulate and modify neural activities. They help treat neurological disorders that effectively produce electrical stimulation to the intended parts of the patient's brain, which include the peripheral nervous system and spinal cord. These are mainly used for the treatment of diseases, such as Epilepsy, movement disorders, Parkinson's disease, depression, and chronic pain.

The neurostimulation devices market was valued at USD 5,608.76 million in 2019 and is expected to grow with a CAGR of 12.4% during the forecast period. 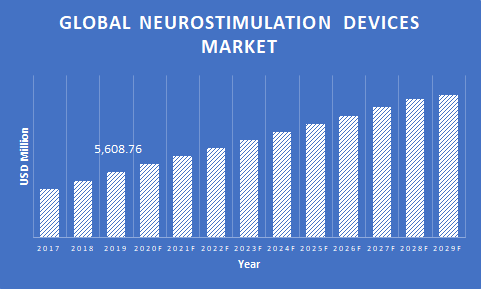 Increasing prevalence of neurological diseases and lifestyle-related illnesses, burgeoning international R&D investment, and shifting preference towards minimally invasive procedures drive the market growth. Stroke is the third leading cause of death; on the other hand, Alzheimer ranked sixth in the U.S., as per the American Academy of Neurology.

As per the American Academy of Neurology, Parkinson's disease affects nearly 1 million Americans per year, with at least 60,000 new cases reported annually, further driving the demand for neurostimulation equipment. In addition, the manufacturers are investing heavily in the R&D activities to develop advanced products and technologies, such as implantable neurostimulation devices. Implantation of neurostimulation devices is a minimally invasive procedure that reduces hospital stays and promotes faster recovery, further driving its adoption. 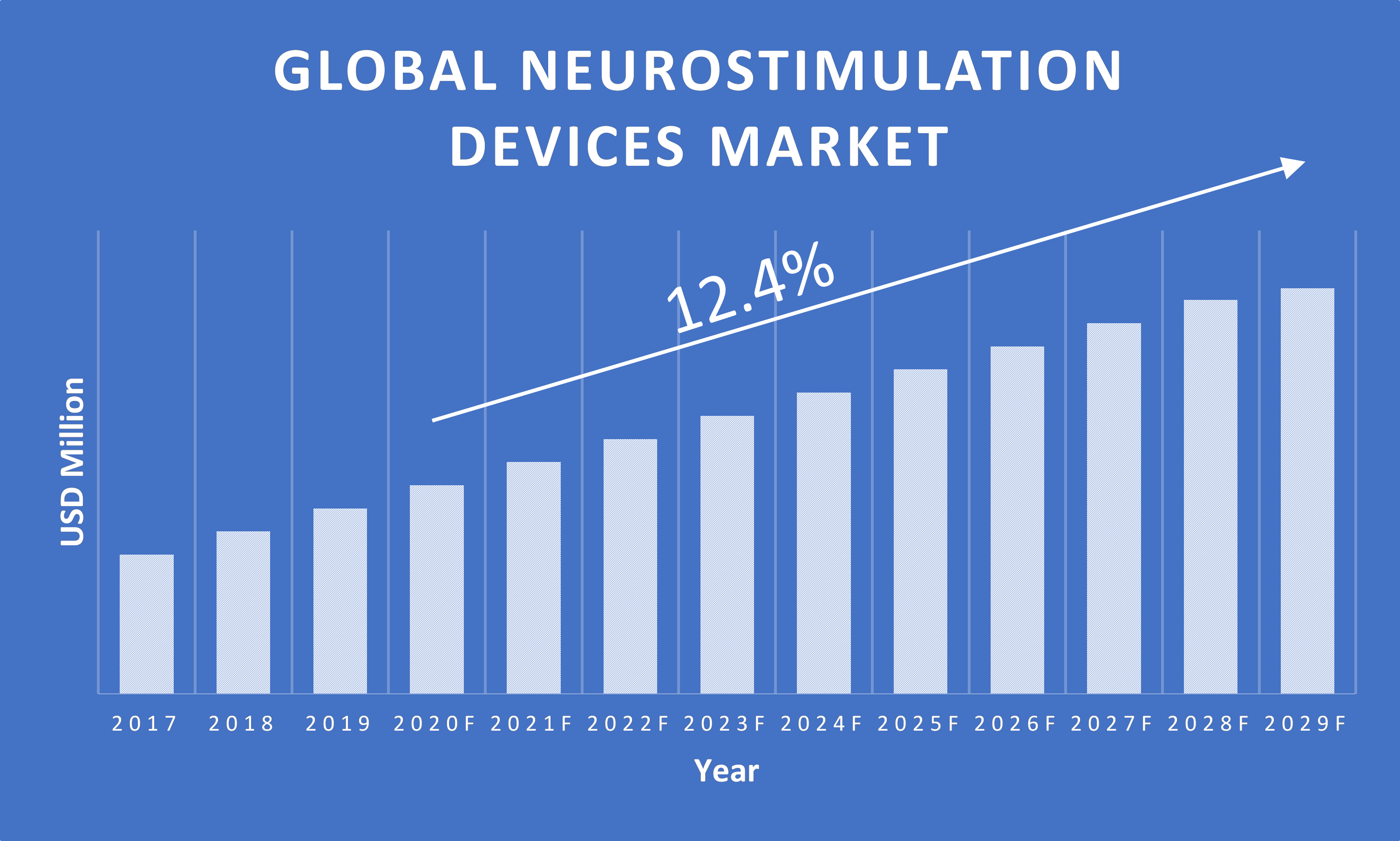 The advent of technologically advanced neurostimulation devices and the growing demand for neuro-stimulating products for the treatment of multiple neurological conditions drives the market growth. The development of an electric neurostimulator that aids in the management of various nerve disorders fosters market growth. The researchers use electrical stimulation to help people recover from spinal cord damage and regain control of the body functions. In addition, the FDA approved the first visual prothesis, which enables doctors to manage patient health more accurately.

The spinal cord stimulators segment is projected to grow with a significant CAGR on account of the rapid technological advancements and its wide product application and high market penetration. Spinal cord stimulators are used in the treatment of non-malignant chronic neuropathic pain as they can alleviate the discomfort by generating tiny nerve impulses without causing any physical modifications to the target region.

By application, the pain management segment leads the market on account of the rising incidence of chronic pain disorders and the increasing use of products for pain management. Some of the disorders covered under the section include chronic pain, disk working pain, and pain in the legs. As per the World Health Organization (WHO), globally, about 50 million people suffer from Epilepsy, which is a brain dysfunction causing disease. 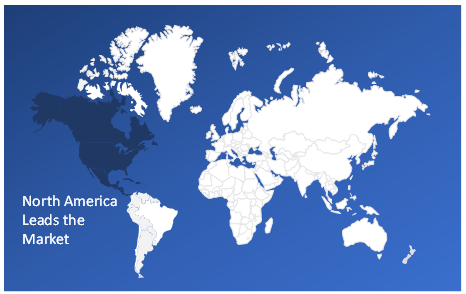 North America leads the neurostimulation devices market and is projected to dominate the market during the forecast period. Neurological conditions affect approximately 100 million people in North America. As per the report, 'HuffPost' released in 2017 suggests that about one-third of the overall population suffers from neurological illnesses such as Alzheimer's, multiple sclerosis, migraines, seizures, and spinal cord injury. As per the American Neurological Association, about 8.4 million Americas aged 65 and above are projected to suffer from dementia by 2030. However, strict government regulation and the sluggish FDA approval process hamper the market growth.

The region is also backed by the presence of robust healthcare facilities and key healthcare players that are focusing on product inventions and expansion to gain a competitive edge. For instance, in April 2017, Boston Scientific announced its PRISM (Precision Implantable Stimulator for Migraine) to be successfully implanted in the first patient in a clinical study.

Europe's neurostimulation market is primarily driven by rapid economic development and an easier product approval process. The growing geriatric population and rising prevalence of Parkinson's disease drives the regional market growth. Parkinson's disease is the second most common after Alzheimer's among the age-related neurodegenerative disorders. It affects about 1 in 500 people, as per the NHS U.K.; thus, approximately 127,000 people are living with the condition in the U.K.

Most people with Parkinson's develop symptoms when they're above the age of 50. Parkinson's syndrome is one of the most common neurological diseases in Germany. It affects people aged above 65 years, and the prevalence is 1,800 per 100,000. Furthermore, Europe houses the largest geriatric population; as per the Fondation de France, one per five French people is above 60 years and above. In France, about 150,000 people suffer from Parkinson's disease. The emergence of existing industry players that are focused on developing technology-driven products provides an impetus to the market growth. In November 2018, Abbott launched a new DRG Invisible Trial System, approved by the U.S. FDA, and received the CE Mark in Europe.

How much is the Neurostimulation Devices Market worth in the future?

The neurostimulation devices market was valued at USD 5,608.76 million in 2019 and is expected to grow with a CAGR of 12.4% during the forecast period.

What is the key factor driving Neurostimulation Devices Market?

Which region is expected to hold the highest market share in the Neurostimulation Devices Market?

Who are the active players in Neurostimulation Devices Market?

What was the value of Global Neurostimulation Devices Market in 2019?

In 2019 Global Neurostimulation Devices Market was valued at USD 5,608.76 million.

Which is the leading segment in the Neurostimulation Devices Market?

Spinal Cord Stimulators Segment is expected to be the leading segment in Neurostimulation Devices Market during the forecast period.