Feedstock is a raw material that is used in the industrial process to generate energy. Petroleum liquid feedstock is a blend of several different types of hydrocarbons that are extremely volatile and highly flammable in nature. It is mainly derived by the process of distillation if coal, petroleum, and wood. For instance, Naphtha one of the petroleum products is extracted and obtained from the distillation of crude oil and is used as feedstock for petrochemical and fertilizer industries.

Natural gas oil is a key input for plastic production and difficult to transport. Petrochemical manufacturers have a strong dependency on natural gas oils or ethane as a feedstock. The new plastics infrastructure in the Gulf region is highly driven by the U.S. shale gas boom.

Naphtha is another essential element for a plastic product that is extracted from oil refining. The production of naphtha is done in key oil companies with refining capacity. The five prominent players, namely Chevron, Shell, British Petroleum, ExxonMobil, and China National Petroleum Corporation, together account for over half the global naphtha sales.  The plastic packaging used for food and other commercial products is derived from petrochemical products, including polyethylene and polystyrene. Thus, the massive demand for plastic will eventually drive the petroleum liquid feedstock market.

As per the International Energy Agency, advanced economies of the world, such as the U.S. and those in Europe, currently use as much as 20 times more plastic compared to developing countries, such as Indonesia and India, on a per capita basis. This offers an enormous break for the increasing demand for petroleum liquid feedstock.

Figure 1: Per Capita Demand for Key Plastics in Selected Countries, 2015 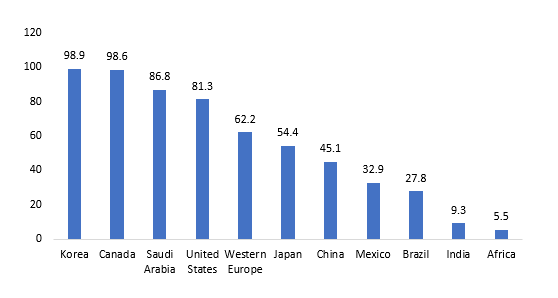 Despite the considerable rise in recycling, measures to repress the single-use of plastics are gaining traction, particularly in countries of Europe, Japan, and Korea. With a considerable amount of harmful plastic litter in oceans and seas, the European Commission proposed new EU-wide rules to target the 10 most single-use plastic products found on the sea and beaches of Europe. Put together these single-use plastic products constitute 70% of all marine litters. Consequently, the proposed regulations are expected to bring both environmental and economic benefits like it aid in preventing the emission of almost 3.4 million tons of CO2 equivalent. These efforts are expected to be offset as developing countries are rapidly increasing their plastic consumption. The unavailability of alternatives for petroleum liquid products is another drawback that will impact the growth of the market. 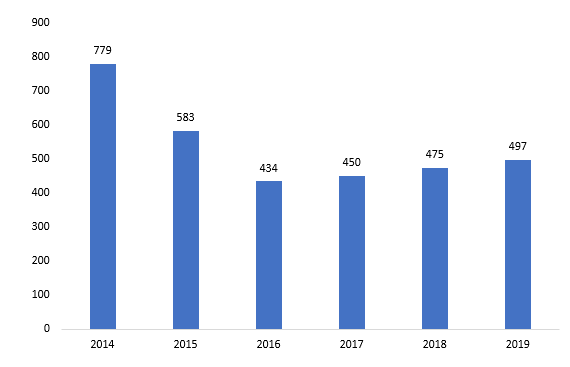 Ethylene, an end product of petroleum liquid feedstock, acts as a starting element for various industrial synthesis. It is extensively used in the chemical industry for the production of polymers. In the past few years, the chemical industry has witnessed a considerable surge in growth. In 2018, the top ten chemical-producing countries accounted for 86.7% of global chemical sales. China alone accounted for USD 1,338 billion, which was almost equivalent to both Europe and NAFTA’s chemical sales of USD 1,223 billion.

The chemical industry is pivotal to the economic development of growing countries, such as India. India’s chemical sector accounts for about 10.5% of the country’s foreign trade. Although chemicals are vital, their implications on human health and environmental degradation are immense. The chemical industry is expected to witness a gradual eastward shift towards Asia, looking at the debouching trends and proclivities in the manufacturing sector, which will further drive the growth of the petroleum liquid feedstock market in Asia-Pacific.

Global chemical sales were valued at around USD 3,730 billion in 2018. The chemical industry is an important part of the world economic landscape and plays an essential role in economic growth across the globe. Growth and developments in the chemical industry are essential to meet the various targets set by the United Nations Sustainable Developmental Goals (SDGs).

The global market is witnessing a significant upsurge in the FDI and government investments in the chemical and petrochemical industry. In addition, several governments around the globe have introduced favorable policies in terms of aid and subsidies for boosting industrial growth. As per data by Oxford Economics, the total contribution of the chemical industry to the global GDP was valued at around USD 5.7 trillion, and the total global amount spent on R&D activities accounted for USD 51 billion.

Elements such as ethane and propylene are used abundantly in the chemical industry. Several gases, such as acetylene, benzene, propane, and ethylene, derived from the refining of petroleum and used in various end products, such as paper, paints, textiles, and pharmaceuticals, are propelling the petroleum liquid feedstock market.

Use of Ethylene in Controlling Fruit Ripening & Promoting Crop Growth

An ethylene or nitrogen mixture supplied in cylinders is used to control the ripening of fruit, especially bananas, wherein a concentration of a few ppm in the warehouse atmosphere. It also finds application in promoting crop growth, wherein the gas is directly injecting into the soil. Thus, the growth of the agriculture sector will directly translate to the growth of the petroleum liquid feedstock market.

The demand for petroleum liquid feedstock is on an upward trend in Asia-Pacific on account of the increasing number of food manufacturing plants. In 2017, Singapore’s food industry contributed USD 4.3 billion to the country’s GDP (1.1%). China accounts for about one-fourth of the world’s total population and, therefore, serves as one of the largest consumer markets. The country imported 53.48 million tons of food and beverage in 2017. With Asia’s vast food industry, the regional petroleum liquid feedstock market is bound to grow manifold during the forecast period.

Who are the active players in Petroleum Liquid Feedstock Market?

Which is the leading segment in the Petroleum Liquid Feedstock Market?

Ethylene End Product Segment is expected to be the leading segment in Petroleum Liquid Feedstock Market during the forecast period.

What is the key factor driving Petroleum Liquid Feedstock Market?

Increasing demand for plastic, and rising oil prices are the key factors expected to drive Petroleum Liquid Feedstock Market during the forecast period.