Pickles are preserved relishes consisting of vegetables or fruits. Pickling is the process of preserving or increasing the lifespan of food items by either anaerobic fermentation in brine or immersion in vinegar. Commonly pickled food items include fruits, vegetables, eggs, and meats. The pickling process usually affects food’s flavor and texture and ensures preservation of perishable foods for months. Antimicrobial herbs and spices such as garlic, cinnamon, mustard seeds, and cloves are normally added in the pickling process. Pickles are largely consumed with meals as taste enhancers, and toppings on sandwiches, hotdogs, and hamburgers. Most pickles are well known for their health benefits such as improved digestion, reduced ulcers, antioxidant properties, and minerals and vitamins.

Pickles are a rich source of necessary nutrients such asiron, vitamins, potassium, and calcium, which is a key factor that drives their consumption. They also possess antioxidants, which prevent free radicals from attacking the human body. Pickles also help in digestion as they have prebiotic properties.  The increasing demand for organic pickles is expected to drive the growth of the global pickles market during the forecast period. Additionally, the booming food service sector is also contributing to the increasing demand for pickles around the globe, which is likely to propel market growth.

Furthermore, the increasing popularity of non-GMO (genetically modified organisms), organic pickles and introduction of innovative products with better taste that target health concerns are some of the opportunities available in the global pickles market.

The lack of preservatives in organic pickles decreases their shelf-life, which is one of the key restraining factors hampering market growth.

The global pickles market can be segmented by type, taste, and distribution channel.

The market has been segmented into fruit, vegetable, meat, and others. Fruit pickles witness demand from global consumers, owing to the benefits associated with fruits pickles; for instance, mango and lemon pickles prevent morning sickness and help in weight loss and good clotting of blood due to the presence of vitamin K.

The market has been segmented into sweet, salty, and sour pickles. The sour pickles segment is projected to grow at a considerable rate during the forecast period (2016–2026) as sour pickles are rich in beneficial bacteria, food enzymes, and others. Sour pickles also offer a longer shelf life as compared to their counterparts.

The market has been segmented into supermarkets & hypermarkets, convenience stores, independent retailers, online, and others. The online segment is expected to gain traction, due to the availability of a wide range of pickles and the benefits associated with online purchasing such as door step delivery and discounts. 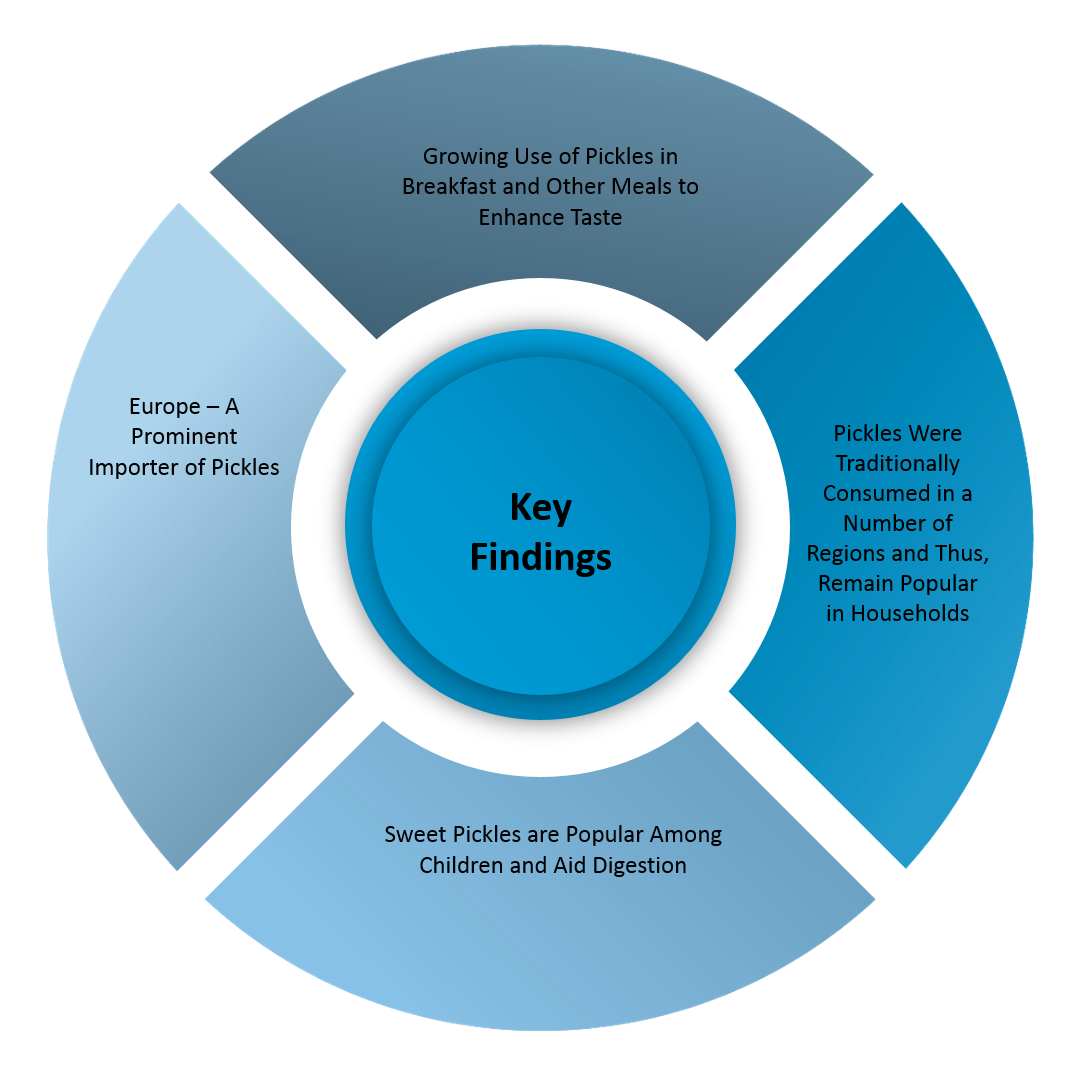 Asia Pacific is expected to be the fastest growing region during the forecasted period, owing to the high demand for spicy products in countries across the region. Growing processed food industry, especially in India, is another factor contributing to market growth in the region. In India, pickles have been traditionally used since centuries.

The Asia Pacific pickle market is projected to witness remarkable growth during the forecast period, owing to government initiatives promoting investments. According to the India Brand Equity Foundation (IBEF), the Indian food processing industry accounts for 32% of the country’s total market. Additionally, it is one of the largest industries in India and is estimated to rank fifth in terms of production, consumption, and export.

North America is slated to account for a prominent market share during the forecast period. Introduction of new flavors and health benefits associated with pickles have attracted younger consumers, which is expected to provide impetus to market growth further. Cucumber and olive are the two most popular flavors of pickles in the region. In North America, Canada and the U.S. were pegged to be the top importers of pickles during 2017.

Europe is expected to witness steady growth rate during the forecast period, owing to the growth of the region’s food and beverage sector. The increasing consumption of pickles as taste enhancers is further expected to drive market growth in the region.

Latin America is projected to be a lucrative region in the global pickle market, owing to the high consumption of processed products in the region, especially pickles.

The Middle East and Africa region is estimated to register sluggish growth during the forecast period, due to lack of knowledge, slow infrastructural development, low availability of resources, and less disposable income.

Which Future Developments Are Expected to Impact the Persulfates Market? 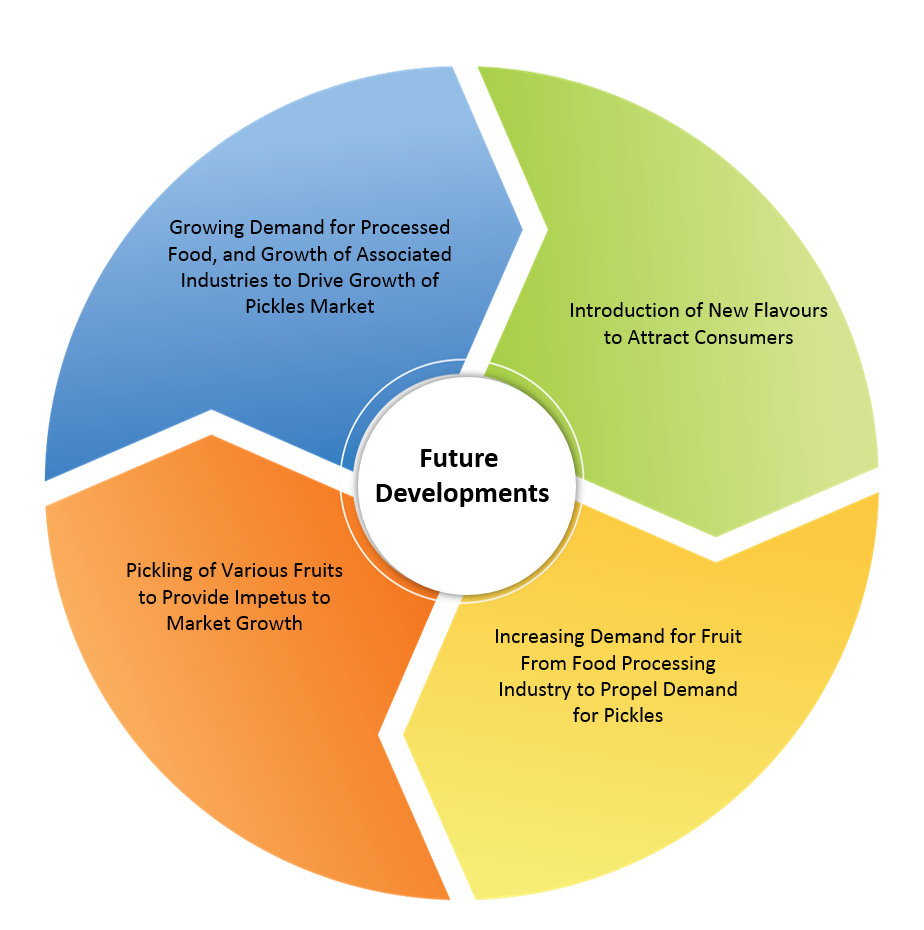 Get Your FREE Sample Copy of the Pickles Market Report