Silicon Photonics is highly in demand across the globe to shape new data center architectures. The rise in technology trends such as the next-generation microelectronic chip is driving the market growth. Rising consumer demand to store, interpret and share the generated content has tremendously increased data traffic. The silicon photonics technology will, therefore, support the Internet of Everything (IoE) and cloud computing technology trends for efficient data management. It is designed to support cognitive computing and big data analysis to deliver a speedy and timely response. Silicon photonics is set to supersede the traditionally used optics technology to transmit data at faster speeds. Demands for higher data transfer speeds at greater baud rates and lower power levels are encouraging the developments of optoelectronic interconnect to support a wide range of applications. 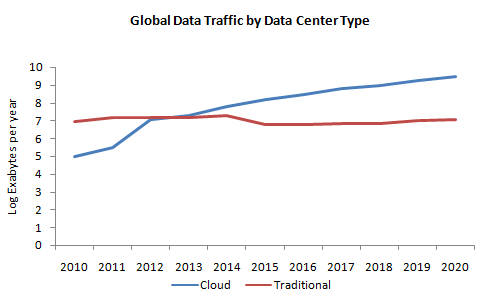 Slow LED supply chains, cancellations of trade shows, and employee dropouts in fear of the deadly pandemic have started to weaken the global silicon photonics market. However, recent studies show that it might actually help to increase economic productivity in some regions. The demand for UV-C LEDs is one the rise lately, owing to their usage for decontamination. Medical facilities believe that approximately 90% of the pathogenicity of the virus can be eradicated through exposure to UV-C light. Since South Korea is the biggest manufacturer of UV-C LEDs, the country is receiving bulk orders but is struggling with its just-in-time supply chain, as the rising cases of COVID-19 are interrupting production. Inability to domestically produce and manage consumer technology can lead to overpricing of products in the upcoming years

The Emergence of Cloud Computing and the Prevalence of Digitalization

Widespread applications of silicon photonics across industries such as IT and telecommunication, defense, and healthcare are substantially driving the market growth. The rising demand for active optoelectronic cables, multiplexers, and attenuators to overcome the limitations in traditional optical technology is fuelling the market growth. Changing consumer preferences with the advent of digitalization and cloud computing is urging OEMs to deliver high-end microscopic solutions for high bandwidths of data transmission over long distances.

Lack of availability of raw materials and delicacy of components used to design the final product can challenge market productivity. Inefficient electroluminescence, especially in bulk crystalline silicon, is a major factor hampering the silicon photonics market requiring extensive R&D and focus. Heat sinking, power consumption, energy dissipated per bit per second, cost, and size are important factors that need attention while selecting a light source. The high cost of lasers and amplifiers for intense optical pumping is another concern for manufacturers. The complexity of the task and lack of skilled labor is likely to harm the market growth trend.

Rising global penetration of the internet and smart devices will increase the data traffic dramatically in the upcoming years. Therefore, authorities need to upgrade data centers to handle enormous pressures. Next-generation Ethernet speeds and the ramping of 5G networks are anticipated to fuel multi-fiber waveguide-to-chip interconnect solutions, laser development, and advanced multi-chip packaging. The Cisco Global Cloud Index estimated annual data traffic of 1.9 ZB in 2019, of which 0.9 ZB (9%) came from traffic between data centers such as replication and inter database links.

IT and telecommunication, aviation, and healthcare are some of the notable customers of the silicon photonics market. The burgeoning growth of IoT connected devices and changing trends will augment the incorporation of silicon photonics in transceivers in consumer electronics. Cloud-based services provided by key vendors is likely to increase market demand due to the ever-increasing data loads and traffic due to online activities. There has been a multi-fold increase in internet usage, and live streaming and broadcasting activities have soared amid lockdown situations due to the coronavirus. As a result, the adoption of silicon photonics to achieve energy efficiency and high-speed performance is the topmost priority of manufacturers. Healthcare facilities, laboratories, military, and transportation industry are similarly demanding high-speed networks and larger cloud space to manage their data which is, in turn, is propelling the market growth.

A Slew of Data Centers in North America

North America is expected to witness a faster market growth during the forecast period. Key vendors in the region are investing in R&D of data communication solutions. The rising number of data centers and inclination towards high-speed data flow utilizing less energy is significantly driving the market growth. Cisco Systems is working to reduce the estimated cloud workload of 94% and related costs by rapidly adapting to embedded silicon photonic functionalities. GI Partners, a San Francisco-based private investment firm, in 2019, purchased two data centers properties from NTT Data, in order to expand its business portfolio

Europe is expanding its silicon photonics market through trade shows and virtual conferences to attract a larger audience. The region is expected to leverage the considerable market potential beyond telecoms and datacoms. The current approach is to focus on the utilization of silicon photonics in wavelengths beyond the visible to mid-infrared ranges. Silicon nitride for visible-range confinement and germanium-on-silicon architectures for mid-infrared applications are currently being tested under PIX4Life and MIRPHAB, Europe’s two pilot line projects

In Asia-Pacific, the advent of 5G is estimated to witness a massive overload of data traffic, resulting in a high demand for equipped data centers for fast communications without quality distortion. Key vendors are expected to gain a competitive edge as the market demand continues to expand. In January 2019, Oracle announced its plan to open its first data center in India to extend its cloud offerings. Further, MeghRaj, an Indian government initiative, is propelling the delivery of e-services while optimizing ICT spending, which is expected to bolster the silicon photonics market growth. The presence of key semiconductor and telecommunication device manufacturers such as China, Japan, and South Korea are anticipated to contribute a considerable share to the market economy with their investments in miniature electronics.

Key players and healthcare providers in the Middle East are investing in telecommunications Fibre optics to treat diseases such as cancer, vision correction, endoscopy, and other health monitoring. Public-private partnerships and government initiatives are expected to boost market adoption in varied applications areas such as defense technology, laser material processing, visual art, bio-photonics, agriculture, and robotics, in the Middle East and Africa. The region is also deploying silicon photonics in high-performance computing in data storage and sharing. Emerging players in South Africa are involved in global conferences, seminars, and trade shows to connect with well-established providers as well as investors to enhance research and development in the various applications of silicon photonics and optoelectronic integrations