Understand the influence of COVID-19 on the Gluten Feed Market with our analysts monitoring the situation across the globe.

Gluten feeds are important elements in livestock feed to enhance nutritional quality, optimize animal performance, and enhance feed digestibility. They also play an essential role in preventative health maintenance. Gluten feeds promote growth during the various phases of an animal's life cycle, improve animal fertility, and serve as the best source of proteins for the development of bones as well as muscles. There has been an increase in the demand for protein-rich animal feed globally, and gluten feed is particularly popular among livestock producers as it provides an effective, nutritious, and economical source for the livestock, beef, and dairy industries. 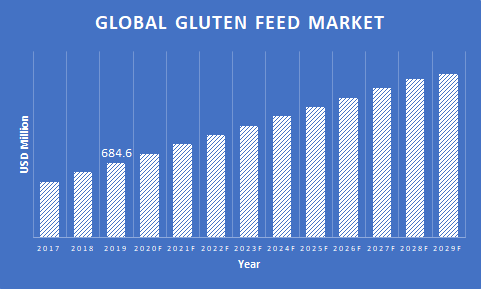 Global seafood production has reached a value of 171 million tons each year, growing 25.4% since the year 2002, as per the State of World Fisheries and Aquaculture report presented by the Food and Agricultural Organization. Increasing seafood production translates into high demand for aquafeed. The current aqua feed consumption is estimated to be around 40 million tones, mainly for shrimp and freshwater aquaculture. The demand for gluten feed in aquaculture is rising with the demand for protein-rich feed and the increasing consumption of fish and other seafood.

In dairy farming, lactating cows are often fed with corn gluten feed as it acts as a source of energy, proteins, and fibers. As per the National Dairy Development Board, the addition of corn gluten feed in cows' and buffaloes' feed can increase milk production as well as nutrients and energy supply through milk.

Grain feeds such as corn grains, sorghum or milo, cottonseed grains, and soybean were traditionally used as animal feed supplements. The cost of these feeds was high due to processing costs, imbalances in supply and demand for grain feeds, and export restrictions. Nowadays, cattle producers rely on gluten feed products as an alternative to supplement their cattle.

Gluten feeds provide the required nutrients at a lower cost than traditional grain feeds as they are generally produced close enough to the destination of distribution, which minimizes transportation cost. Moreover, the manufacturing costs associated with the production of gluten-based feeds is also lower as gluten feed is a byproduct obtained during the manufacturing of wheat starch, corn starch, and corn syrup, and corn, wheat, and other raw materials are abundantly available. Thus, gluten feed is cost-effective as well as nutrient-rich compared to traditional grain feed, which contributes to the growth of the gluten feed market.

The corn segment dominates the market on account of corn's high protein content and the high utilization of corn gluten feed in the poultry industry as it contains xanthophylls necessary for the yellow bulk in egg yolks. Moreover, corn gluten feed is also widely used as fodder for cattle and swine as it contains significant amounts of energy, crude proteins, digestible fibers, and minerals.

Wheat Segment by Source to Register a High CAGR

The wheat segment is expected to grow fast during the forecast period, primarily due to the large-scale production of wheat globally. Wheat gluten contains hydrolyzed proteins responsible for the increased production of milk in cattle feed, which drives its adoption in the dairy sector. It also acts as a probiotic in the form of good bacteria for animals. For example, Arabinoxylan oligosaccharide is a probiotic carbohydrate derived from wheat gluten that helps in stimulating the activity of bifidobacteria in the colon, which are essential to prevent infections and produce vitamins in animals. Further, wheat protein is used specifically as feed for young animals in the pet feed market and gaining pace as a replacement in aquaculture.

Barley and rye rank after maize and wheat in livestock gluten feeds and are expected to garner attention with the increasing utilization in the beef industry as cattle feed. These gluten feeds are also under consideration for poultry and aquaculture feed products. Due to price fluctuations, the demand for barley and rye in the feed sector has made them less economical; hence, their use in the feed sector is limited. Instead of these, pulses such as lupines and vetches are specifically cultivated for the livestock feed industry.

In terms of livestock, cattle hold the largest market share owing to the large population and increasing demand from the beef and dairy industries. About 60% of corn gluten feed production is used by the cattle industry. Dairy and beef industries in the U.S. have access to gluten feed as facilities for processing the feed are located in the vicinity of production sites.

Poultry Segment by Livestock to Record a High CAGR

The poultry segment is anticipated to grow at a faster rate as it is the primary source of income for many. The high rate of broiler production growth is expected to trigger high-gluten feed requirement in the market. Nutritionally balanced gluten feeds are used in large-scale commercial poultry farming to increase the quality and productivity of the meat. As per a report published by Alltech in the 2019 Global Feed survey, the global production of poultry gluten feed was pegged at around 500 million tons.

Aquaculture Segment by Livestock to Gain Traction in Coming Years

Marine and fresh water fish and crustaceans farming is gaining popularity with the increasing demand for seafood, which can further be attributed to seafood's high nutritional value. Aqua gluten feed is the fastest-growing segment in the gluten feed market owing to the sharply increasing demand and surge in the commercial aquafeed industry. 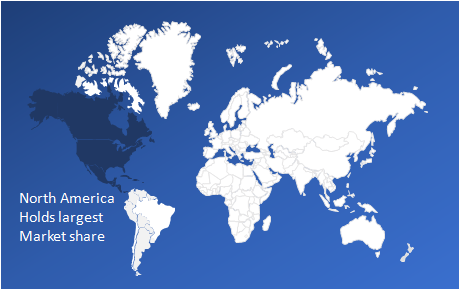 Globally, North America holds the largest market share on account of the high demand for gluten feed from the region's large meat industry. As per data published by the Institute for Feed Education and Research (IFEEDER), the U.S. animal feed manufacturing sector reported the sale of 300 million tons of gluten animal feed.

Corn is the most abundantly produced crop in the U.S.; hence, corn gluten feeds are widely used as animal feed in the country. Moreover, North America exports a large number of meat products to Europe and other countries, which further drives the regional meat industry, and in turn the gluten feed industry. As per the U.S. Department of Agriculture, chicken meat exports grew 4% in the U.S. from 2017 to 2018.

Europe's gluten feed market is growing rapidly with the increasing awareness about specialized livestock nutrition and demand for high protein content feed from the livestock market. Corn gluten feed and wheat feed contribute to the increasing demand from European consumers in the animal feed market for poultry, pigs, and cattle. The production and processing of corn and wheat gluten meal is a priority in the Europe animal feed market.

Europe's starch industry processes around 25 million tons of starch every year, which produce byproducts of gluten-based animal feed. It is the key producer of gluten-based animal feed in the market and supplies about 10 to 15 million gluten feed every year. As per the European Feed Manufacturers' Federation, the region reported significant growth in the gluten feed industry in 2018. The European Commission's Agricultural Outlook Conference reported that 31% of livestock farms are using gluten feed derived from wheat and corn.

Asia-Pacific will capture a significant share of the gluten feed market as the demand for gluten-based livestock feed from the region's livestock production, and dairy industry is continuously increasing. Significant growth has been reported in the production and consumption of livestock products in countries such as China, India, and Japan.

With economic development in emerging economies, customer preference has shifted to meat and animal products. Changes in lifestyles and strong customer purchasing power, coupled with shifting consumption habits, are some of the factors contributing to the high growth and demand for gluten feed in the livestock market. Growing industrialization in dairy and feed probiotics are expected to present growth opportunities for Asia-Pacific's gluten feed market.

The increasing consumption of pork in South America has raised awareness about livestock feed, and the recent outbreak of foot and mouth diseases and swine flu have greatly impacted the regional pork market. Since pork is widely consumed throughout the world, various regulatory agencies such as USFDA and the European Union have set high levels of food safety standards for processed and raw pork products on the market, which is expected to raise demand for high-quality gluten feed in South America's animal feed market.

In the Middle East, rapid industrialization in the livestock feed and processed meat industries has raised the demand for gluten as it acts as a nutrient enhancer and provides the animal with all required essential elements for growth. The GCC countries are heavily dependent on imports for feed materials, livestock, and meat, due to arid soil conditions and water shortages.

Market share analysis findings suggest the market is competitive, with key players accounting for just 40% of the market share despite having large product portfolios. Players in the gluten feed market can be categorized into R&D firms, manufacturing firms, and distributing companies. Most of the market players are engaged in the B2B supply chain for the distribution of their products.

How much is the Gluten Feed Market Worth in the future?

Which is the leading segment in the Gluten Feed Market?

Wheat Type segment is expected to be leading segments in Gluten Feed Market during the forecast period.

What was the value of Global Gluten Feed Market in 2019?

Who are the active players in Gluten Feed Market?

Which region is expected to hold the highest market share in the Gluten Feed Market?