The hydrogen compressor market is estimated to be around USD 1,670 million, expected to grow at a CAGR of over 2% during the forecast period. A hydrogen compressor is a device used to reduce the overall volume of the hydrogen and keep it under pressure for applications pertaining to storage and transportation.

Global economies and international organizations have been actively proposing the idea of shifting to an alternate and cleaner source of energy. The characteristics of hydrogen gas make it a potential product to be used in clean energy generation. The increasing demand for hydrogen for energy generation, especially in the transport sector, is anticipated to lead to a higher demand for hydrogen compressors and drive the hydrogen compressor market.

The hydrogen compressor market is still in the growth stage. However, the growth rate is expected to be slow owing to the recent discovery of new shale oil deposits in the U.S., and the disagreement related to oil and gas supply between Russia and the Organization of Petroleum Exporting Countries (OPEC). Therefore, this discovery and the dispute between the U.S., Russia, and OPEC will potentially make petrol and other fuels cheaper. Besides, there are popular alternatives, such as solar and wind power. Electricity generated from these sources has a more in-depth market penetration, which will restrict the growth of the hydrogen compressor market.

Hydrogen demand has increased manifold across industries in recent years. The use of hydrogen for energy generation has a lower environmental impact compared to traditional fuels. Globally, governments have taken cognizance of the changing climatic conditions, and are implementing stringent emission norms, especially in the industrial sector. Manufacturers are thus, compelled to turn to clean sources of energy generation. Since solar, wind, and biogas cannot meet the energy demands of this magnitude, manufacturers use hydrogen for clean energy generation to comply with norms. As per the International Energy Agency (IEA), hydrogen demand has grown more than threefold since 1975 and is expected to further increase in the forthcoming years.

Currently, hydrogen is used in several industrial processes. Oil refining, ammonia production, methanol production, and steel production are among the key applications that dominate hydrogen consumption. The ongoing pace of industrialization is anticipated to provide impetus to these end-use industries in the coming years, fueling the demand for hydrogen and equipment used in related processes.

Research in the field of hydrogen fuel cells has increased in recent years. The use of hydrogen is revolutionizing the ways how energy is produced. Hydrogen fuel cells offer the option of generating clean energy while protecting the environment. As hydrogen fuel cells can be used for a wide range of applications, from providing critical energy backup for extensive manufacturing facilities to powering vehicles and homes, the demand for these cells is rising.

Hydrogen fuel cells are predominantly used for powering electric vehicles, primarily due to hydrogen’s ability to store more energy in less weight, which makes these fuel cells suitable for vehicles with heavy payloads and long ranges. The rising demand for cleaner energy is also driving the growth of hydrogen fuels cell. However, the high cost associated with manufacturing is a key hurdle for the market. Thus, to reduce the manufacturing cost, players are investing in R & D. Some early-stage R & D advances aim to reduce the platinum content of fuel cell catalysts and drive the development of durable membrane electrode assemblies.

Researchers in fuel cell technology are continuously working on enhancing these fuel cells for cleaner electric power generation. These R & D activities are further supported by governmental organizations committed to widespread innovation in fuel cell technology. For instance, the U.S. Department of Energy (DOE) funding has led to more than 580 patents, 30 technologies in the market, and more than 65 emerging technologies.

Based on technology, the market is segmented into multi-stage and single-stage. The fundamental difference between multi and single-stage compressors is the number of times the gas gets compressed between the inlet valve and the tool nozzle. Multi-stage compressors are primarily used in the fill storage tanks and hydrogen production plants, as well as for the transportation of hydrogen through the pipeline. These compressors can be customized and sized to match the flow of hydrogen gas produced by a reformer or electrolyzer.

As most of the current energy supply is obtained for the burning of fossil fuels, there has been a considerable impact on the environment. Therefore, individuals and manufacturers are shifting towards alternative fuels to sustain growth in the years to come in. This market sentiment has led to the change in energy outlook, further creating a demand for clean fuels such as hydrogen. Additionally, now the manufacturers in the industry are also focusing on developing multi-stage compressors that can use other sources of energy, including thermal energy and solar energy.

According to the International Energy Agency (IEA), the demand for hydrogen has grown more than threefold since 1975, further anticipated to rise in the forthcoming years, resulting in the establishment of more hydrogen production plants and pipelines for its transportation. 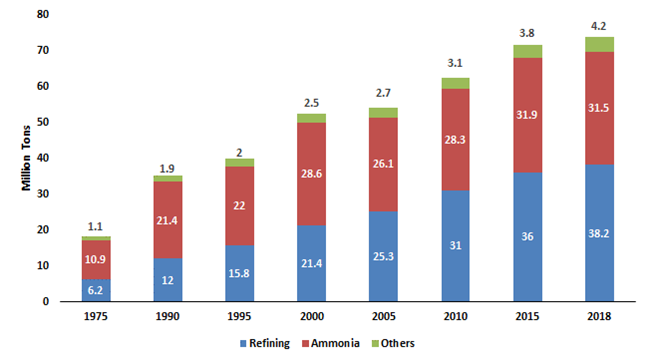 However, the compressor’s initial cost is high for the same capacity compared with a single-stage compressor. It is because the multi-stage compressor needs more than a one-cylinder intercooler, with the water supply system. This high initial cost of the product is anticipated to hinder the market’s growth during the forecast period.

Based on geography, the market is divided into North America, Europe, Asia Pacific, Central and South America, and the Caribbean, Middle East, and Africa.

The hydrogen compressor market in Europe has witnessed significant growth in recent years due to the seismic shift in regional energy consumption from fossil fuels to alternative fuels. This shift in consumer preference is driven by the various initiatives taken by the regional government, focusing on fueling the energy generation’s growth through alternative sources. For instance, Hydrogen Mobility Europe (H2ME) is a flagship project that focuses on developing strategies to make hydrogen-fueled transport a viable and competitive alternative to fossil fuel.

Under the H2ME project, the regions focus on deploying more than 140 alternative fueled cars and vans and 49 new hydrogen refueling stations. The total cost of the project is estimated to be around USD 190.4 million. As the initiatives add to the number of fueling stations in the region, it can be foreseen that it will also add to the growth of hydrogen compressors. 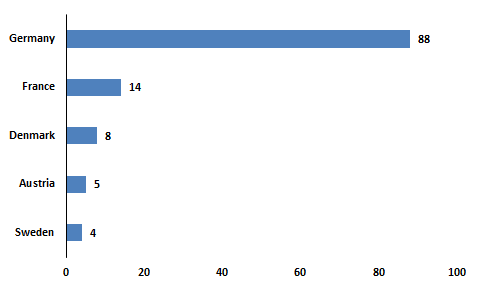 Germany leads the countrywide hydrogen compressor market. This growth of the country market can be attributed to the presence of many hydrogen fuel cell vehicles and filling stations.

Additionally, most refining and chemical production industries that use hydrogen based on fossil fuels are already concentrated in Europe’s market. Thus, making its industrial port the nerve centers for scaling up the use of clean hydrogen across the globe. And as the norms regarding industrial emissions are getting stringent, many industrialists in the region further shift towards the use of hydrogen for clean energy generation. This trend across the industrial sector in Europe is further anticipated to add to the growth of the hydrogen compressor market.

The hydrogen compressor market is fragmented and has a considerable number of minor players. The prominent players have been adopting strategies such as the acquisition of minor players to stay in the market and increase the market share. For instance, in March 2020, Burckhardt Compression announced the acquisition of the global compressor business of The Japan Steel Works.

What was the value of Global Hydrogen Compressor Market in 2019?

In 2019 Global Hydrogen Compressor Market was valued at USD 1,670 million.

What is the key factor driving Hydrogen Compressor Market?

Increasing demand for hydrogen for energy generation, and rising use of hydrogen in an array of industries are the key factors expected to drive Hydrogen Compressor Market during the forecast period.

Which region is expected to hold the highest market share in the Hydrogen Compressor Market?

Europe is expected to hold the highest market share in Hydrogen Compressor Market.

Who are the active players in Hydrogen Compressor Market?

How much is the Hydrogen Compressor Market worth in the future?

Which is the leading segment in the Hydrogen Compressor Market?

The oil-Free Segment is expected to be the leading segment in Hydrogen Compressor Market during the forecast period.

Previous
Next
North America
By Technology

Rest Of Europe
By Technology

Rest Of Asia Pacific
By Technology

Rest of Central SA..
By Technology

Rest of Middle East
By Technology

Rest of Africa
By Technology

Rest Of Europe
By Technology

Rest Of Asia Pacific
By Technology

Rest of Central SA..
By Technology

Rest of Middle East
By Technology

Rest of Africa
By Technology

Rest Of Europe
By Hydrogen Pressure

Rest of Africa
By Hydrogen Pressure

Rest Of Europe
By Hydrogen Pressure

Rest of Africa
By Hydrogen Pressure