Understand the influence of COVID-19 on the Lawful Interception Market with our analysts monitoring the situation across the globe.

Lawful interceptions are widely used by law enforcement organizations and the government to wiretap individual subscribers with legal orders. The data is generally used as evidence or analysis by these officials for further investigation of specific issues. They adhere to the telecommunication standards and provide umpteen benefits, including the ability to intercept the same data privately and maintaining data reliability and ensuring compatibility and compliance with various standards. 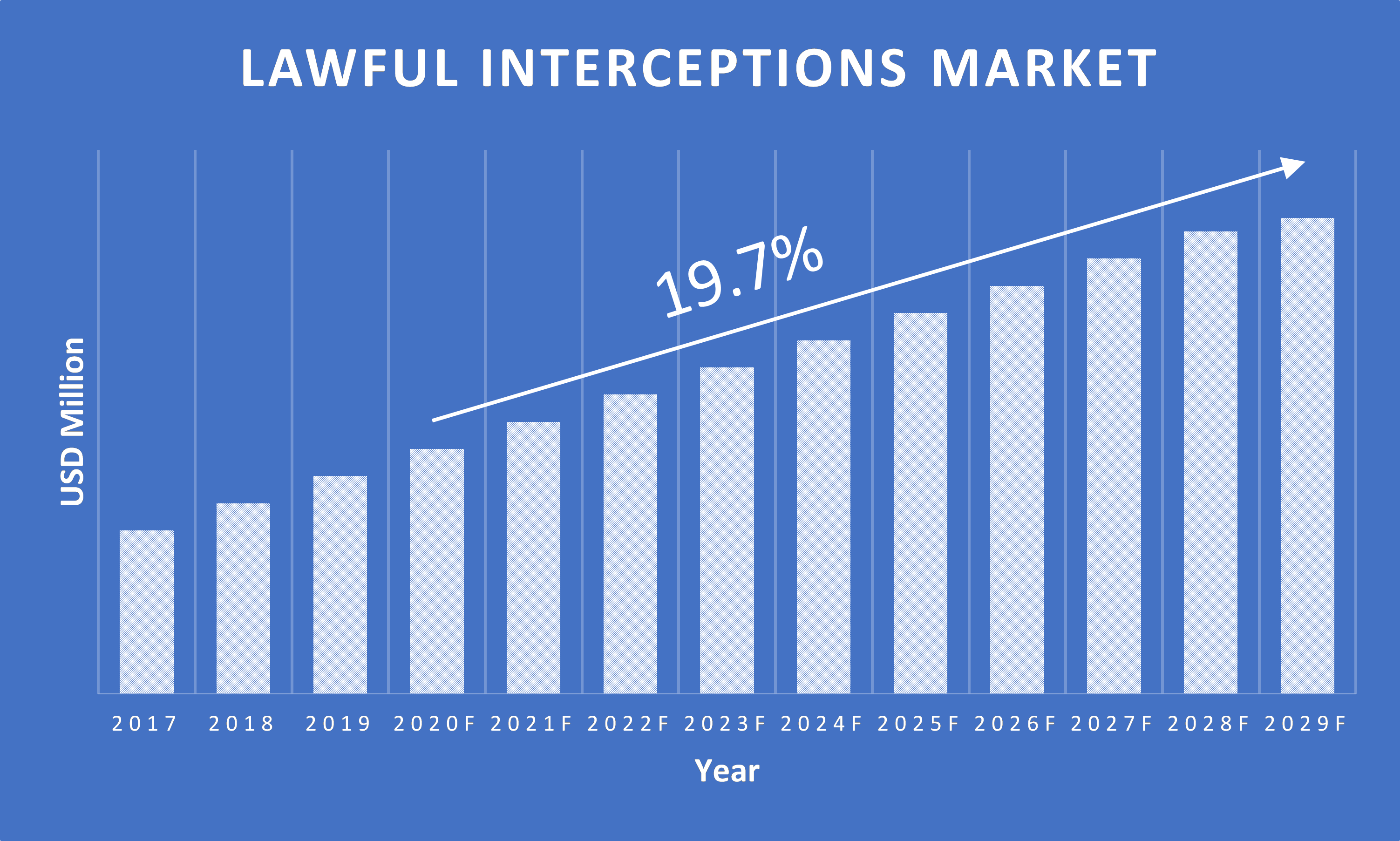 Globally, the number of terrorist attacks has been increasing at a concerning rate. They are planned and communicated through telecommunication networks and social media. For instance, in the Curtis Culwell Center attack, the ISIS operative named Mohamed Abdullahi Hassan, formerly a part of the Al-Shabaab, efficiently directed the terrorists using Twitter. In the 9/11 attacks, the operatives of Al-Qaeda effectively used the Internet to communicate with terrorist cells, coordinating the attacks. Such incidents prompted the need for effective lawful interceptions to control and take action for the unsought terrorist attacks legally.

The parallel increase in cybercrimes, along with digitalization, provides an impetus to the market growth. As per the Internet Crime Report 2019, published by the Federal Bureau of Investigation (FBI), in the U.S., approximately 115,000 new cybercrime cases were registered during 2018–2019. Phishing is the most common cybercrime where fraudulent attempts are made by using fake emails or messages to obtain sensitive information. As per the FBI, there were approximately 114 thousand phishing incidents reported in 2019, further driving the demand for lawful interception.

Lawful interception gives the LEA and the government official access to private communications, such as text messages, emails, and phone calls of individuals and organizations. Rising cyberattack incidents on government organizations have raised the security and privacy concerns over intercepted data. In 2018, a cyber-attack on the North Ireland Parliament Office led to access to the mailboxes of the members, risking substantial information. In 2014, the cyber-attack on the Aadhar Database in India led to a theft of personal information, email IDs, phone numbers, thumbprints, and retina scans of approximately a billion Indian citizens. Thus, rising malicious attacks by skilled hackers have increased security and privacy concerns, restricting market growth.

Globally, the COVID-19 pandemic has compelled the government to impose a lockdown, increasing activities on digital platforms. The incidence of cybercrimes is witnessing a significant surge amidst the pandemic due to the availability of integral business data, increasing the risk of data theft. Additionally, the rapid dissemination of fake news through social media and other mediums such as instant messaging has created panic among the people, prompting the need for lawful interception.

The mediation function is considered as an integral part of the lawful interception solution as it connects the access function (Telecom Service Provider) to the collection function (Law Enforcement Agency) to legally deliver the intercept data and call from the Access function to the collection function. The management server possesses the central database, where delicate information such as authority settings, target data, and audit logs are stored. The access points follow the deep packet inspection technology (DPI), identifying the packets transferred over the headers. They are passively used to analyze traffic and forward the filtered, decoded, and intercepted data.

North America dominates the lawful interception market as the region possesses technologically advanced infrastructure, comprising well-established telecommunication networks providers and Internet service providers (ISPs), such as AT and T, Verizon, Comcast, and Charter Spectrum. Increasing incidences of cybercrime are subsequently surging the need for the lawful interception solution. As per Statista, the cybercrime cases rose from 1,257 billion in 2018 to 1,473 million in 2019. In 2018, California lost more than USD 214 million through cyber-crimes. The rapid adoption of new technology is projected to drive the demand for lawful interception solutions across the region.

Asia-Pacific is projected to witness the fastest growth in the lawful interception market on account of the rising number of mobile connections, terrorist attacks, and cyber-crimes. As per the Global Terrorism Index 2019, Afghanistan ranked no. 1 on the Global Terrorism Index globally, followed by Pakistan, India, and the Philippines. As per the Mobile Economy Report, 2020 published by GSMA, the region is projected to witness the highest number of new mobile subscribers, which are about 247 million new subscribers. Thus, rising incidences of cybercrimes, increasing terrorist activities, and colossal growth of mobile subscribers drive the regional market growth.

By Type of Interception

What is the key factor driving Lawful Interception Market?

Which is the leading segment in the Lawful Interception Market?

Solution Segment is expected to be the leading segment in Lawful Interception Market during the forecast period.

How much is the Lawful Interception Market worth in the future?

Who are the active players in Lawful Interception Market?

Which region is expected to hold the highest market share in the Lawful Interception Market?