Lead-acid batteries are charged from the power grid and are configured to supply power for short-term durations (i.e., 15 minutes) and to allow the plant time to shut down machinery properly. They are desirable for use in motor vehicles because of their strong power-to-weight ratio and affordability to provide the high current provided by starter engines.  Today, in terms of percentages, lead-acid batteries have an advantage over lithium-ion systems, although the latter is expected to have an edge in the future.

The global two-wheeler lead acid batteries market is expected to grow at a compound annual growth rate (CAGR) of 4.5% in the forecast period. 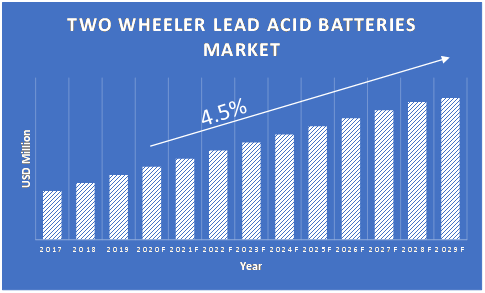 For the young, two-wheelers are considered to be the style. Small homes and the middle class enjoy motorcycles. There has been a substantial increase in the two-wheeler market due to the simplicity and affordability they provide. Bikes have joined the industry with upgraded and updated versions and now can quickly glide through traffic and off-roads.

The Rising Number of Road Accidents

The rising number of road accidents has hampered the growth of the market. Motorcyclists are particularly vulnerable because they account for 23 percent of all road traffic deaths globally. Fatalities are diminishing, but the number of vehicle occupants is still not the same. In India, the number of incidents causing traffic accidents is also rising.

The Ministry of Road Transport and Highways (India) report released in October 2019 observed that more than a third (37 percent) of those killed in road accidents in 2019 were two-wheeler users. Further, globally, the unprecedented growth in death and morbidity due to road accidents has become a matter of considerable concern, thereby restraining the market growth.

The pandemic led to a temporary lockdown of countries that hindered the utilization, manufacturing, and sale of the vehicles. The automobile industry, which primarily consists of outdoor jobs, was poorly exposed to the uncertainty that contributed to a dramatic decline in automotive sales. Furthermore, the instability of the supply chain industry, mostly due to the closing of national and foreign borders and the changes brought on by the decision not to use Chinese products, may impede the operation. However, the partial stoppage of public transport and the need to maintain social distancing is likely to bolster the use of two-wheelers.

Based on battery type, the global two-wheeler lead-acid batteries market is divided into VLRA batteries and flooded batteries. The VRLA (Valve Regulated Lead Acid) batteries are compatibility safer, reliable, and deliver a longer service life. These batteries are known for their improved float life, maintenance-free reliability, and lack of gaseous emission. Further, compared to the flooded batteries, the VRLA provides multiple benefits, such as no threat of acid leakage, low maintenance as the batteries never has to be filled with water, less space consumption, less ventilation area, and the ability to be operated in any orientation.

Asia-Pacific two-wheeler lead-acid batteries market caters to the largest share. It is also expected to expand at a fast pace. Compared with other regions of the world, electric and internal combustion engine two-wheeler sales are high in China and India, followed by Southeast Asian countries. Due to their high fuel efficiency and ease of riding in traffic congestion, two-wheeler scooters and motorcycles are the most common means of transport in the APAC region. As a result, conventional two-wheel vehicles are deeply adopted by customers in the Asia-Pacific region.

The rapid urbanization of developing countries in the region and increasing middle-class family incomes are associated with much of the current increase in scooter and motorcycle use in the Asia-Pacific region. These habits have driven individuals to spend more money on transportation and the need for transport to get to work. Further, as stated in our paid sources, the market value for two-wheelers in the Asia-Pacific region is anticipated to grow at a CAGR of 6.2% from 2016 to 2024, where the market value was estimated at USD 76.4 billion to USD 123.6 billion, respectively.

North America is anticipated to surge due to the increased adoption of electric vehicles, implementation of government tax waiver schemes for manufacturers and consumers of electric cars, along with the increasing rate of pollution due to higher emissions of GHGs.

By 2006, sales of bikes had peaked in the United States. In the U.S. alone, over 1.1 million units were sold in 2006. However, the industry suffered a heavy knock in the financial crash of 2008, with revenues plummeting to less than half of the previous fiscal year. However, the capital markets for major two-wheeler firms have now stabilized, although they have remained sluggish since 2012.

The sales of the two-wheelers in the region are on the higher side in comparison to Europe, the Middle East, and Africa and South America region, thereby bolstering the growth of the market.

Which region is expected to hold the highest market share in the Two-Wheeler Lead Acid Batteries Market?

Who are the active players in Two-Wheeler Lead Acid Batteries Market?

How much is the Two-Wheeler Lead Acid Batteries Market worth in the future?

The global two-wheeler lead acid batteries market is expected to grow at a compound annual growth rate (CAGR) of 4.5% in the forecast period.

Which is the leading segment in the Two-Wheeler Lead Acid Batteries Market?

VRLA Battery Type Segment is expected to be the leading segment in Two-Wheeler Lead Acid Batteries Market during the forecast period.