Articles: Precision Cancer Therapy has been Instrumental in the Growing Adoption of PGX Technologies

In the last decade, genetics has become increasingly important in cancer treatment for patients. Cancer treatment has seen significant advancements in the recent revolution in medical interventions. These differences can result in unforeseen life-threatening or even fatal side effects in those taking the medications. Genetic factors are major determinants for pharmacological efficacy and toxicity.

Oncologists also have a variety of treatment alternatives in the current healthcare setup. However, it is casual that one patient may experience adverse effects while another does not. As a result, the variability within a population causes unanticipated reactions, which impedes the present cancer market landscape.

Pharmacogenomics solutions offer a solution to the issue. Understanding the underlying biological mechanisms and exploiting genetic contributions for customized therapy is the core goal of pharmacogenomics. In contrast to other diseases, cancer genetics must account for both acquired (somatic) and inherited (germline) variation, which influences treatment efficacy and safety. As a result, PGx tests have been used to identify treatment options.

For instance, Pharmacogenomics has revealed therapeutically relevant and actionable indicators, including somatic and germline alterations. Prospective screening for predictive pharmacogenomic indicators, such as TPMT; has improved therapy response by lowering the risk of toxicity from systemic drug concentrations while preserving the medication's anti-cancer effectiveness.

Furthermore, in the field of cancer diagnostics, genomics-based diagnosis has gotten a lot of attention. Technology is altering our understanding of cancer's origins and complexity. Rather than broad categorizations based on tumor location, genome sequencing provides particular characterizations of the combination of genetic defects that trigger or aid cancer progression in a person. Furthermore, some of these genetic modifications interfere with tumor-suppressor genes, which regulate cell growth and death and are generally cancer-protective. Mutations in the tumor-suppressor genes BRCA1 and BRCA2, for example, have been linked to breast, ovarian, and prostate cancer.

The figure below summarizes the usage and relevance of PGX technologies comprehensively. 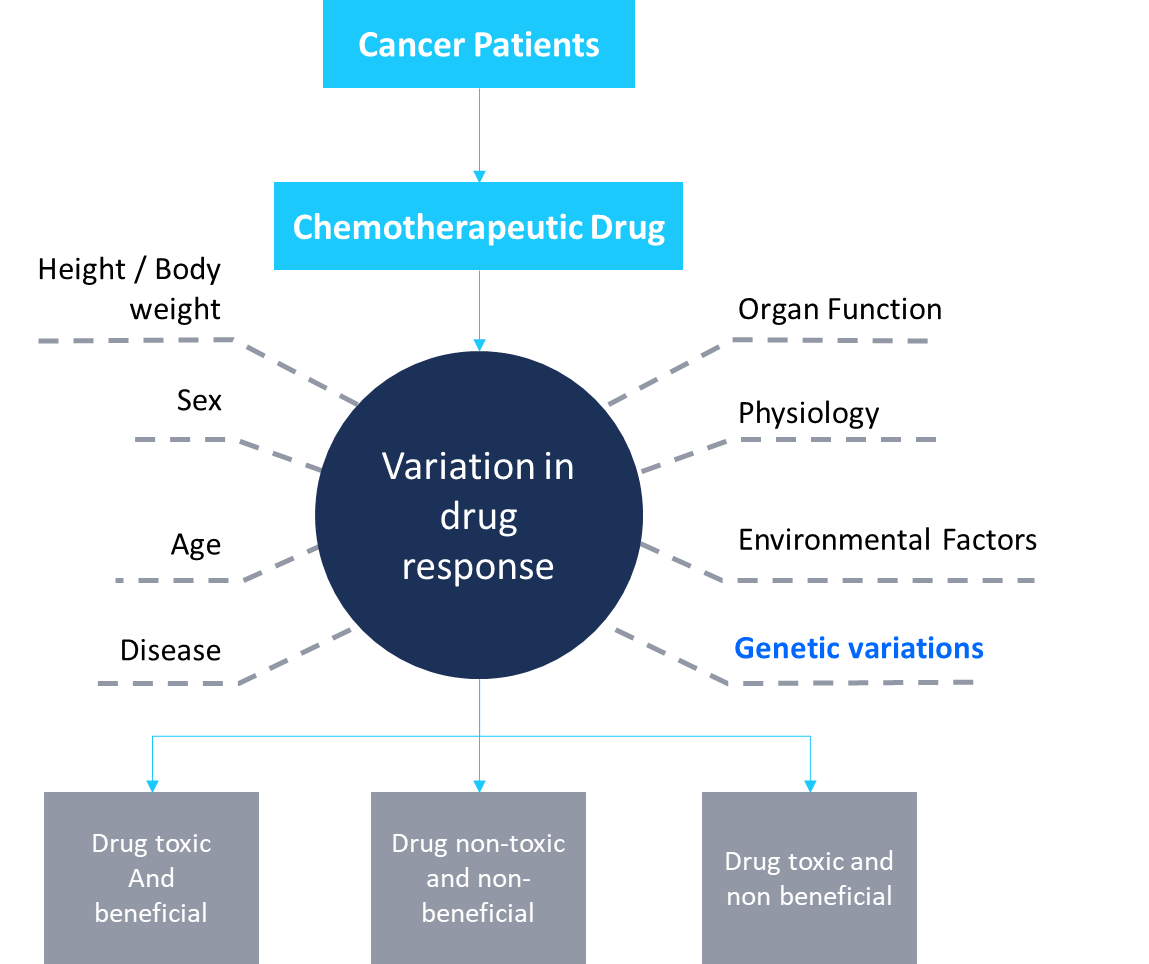 Cancer pharmacogenetics has gotten a lot of attention for cancer therapy, minimizing toxicity while maximizing efficacy. Thus, there have been several government organizations that have mandated the use of PGX labeling. For instance, the U.S. FDA has mandated PGx information labeling in the approved drugs to inform their safety and effectiveness. Thus, labeling drugs in the U.S. with pharmacogenomics information is another major boost to the market growth. Drug labelling may contain information on genomic biomarkers and can describe:

Further, the table below shows a list of biomarkers mandated by the FDA

Table 1: Lists some of the biomarkers associated with cancer treatments mentioned in US FDA-approved drug labels

Advancements in Genomics: A Stepping Stone for PGX Market Development

Genomic data incorporates all elements of human health, and thus, it is the most intimate of all human data that can provide invaluable insights about individuals/Communities. Sequencing a human genome and applying powerful analytical techniques to it has accelerated clinical research and medical drug discovery, personalized treatment regimens, improved patient outcomes, and reduced healthcare costs over the last decade, all of which have benefited healthcare systems greatly.

Furthermore, genomics is having a profoundly good impact not only on biopharmaceutical drug development but also on clinical care, benefiting the lives of millions of patients and demonstrating significant promise for future very positive contributions to human health and well-being around the world.

Getting Your DNA Sequenced Is Cheaper Everyday:

The Human Genome Project, which cost USD 2.7 billion and resulted in the publication of the reference genome, was a success.

The Human Genome Project and subsequent genomics programs prompted the development of commercial sequencing tools and procedures that have substantially enhanced sequencing speed while lowering the cost of each sequence.

Furthermore, as Next Generation Sequencing technologies have been developed and improved and new platforms have been available, the cost and efficiency of DNA sequencing have improved over time. As of the beginning of 2015, a draught human genome may be obtained for under USD 1000 and in less than two weeks using the Illumina HiSeq X 10 technology.

In March 2021, Nebula Genetics was selling whole-genome sequencing (WGS) with 30x resolution (meaning each location is 30 times to increase accuracy) for less than USD 300, a nearly 10,000-fold reduction in price from the first sequenced human genomes. The Institute's funded sequencing sites maintain track of the costs of DNA sequencing, and the most recent data (August 2020) puts the cost per genome at USD 689.17.

The progress in gene sequencing has been a factor that promotes more and more end-users to adopt these technologies. These technological advancements in genomics promote the usage scope for these techniques in Pharmacogenomics testing.

One of the pillars of pharmacogenomics was comprehensive genomic data to enhance medication research and development while adhering to increasingly strict laws and maintaining ethical standards. Genomic data leadership necessitates a robust data strategy to promote drug research and development, comply with more laws, and maintain ethical standards. It, combined with the use of the most appropriate technologies to handle large amounts of data and generate insights, has enabled Life Sciences companies to be nimbler in their drug research and discovery.

The estimated costs of delivering a pharmaceutical drug to market are estimated at around 2.6 billion dollars (USD) in the United States. This massive sum, along with ever-shrinking healthcare budgets, has put immense pressure on R&D teams to create new medicines faster and at a lower cost. Pharmacogenomics provides several options for addressing some of life science's most pressing issues.

The Use of genomics to address critical diseases has been depicted in the figure below.

The Presence of Lucrative Ever-Growing Opportunity Pockets Fuels the Market

Further, the regional governments in several nations have made considerable investments in genomics in recent years. These government investments have aided the development of new technology significantly. Some examples of recent developments in this area include:

Wide-Scale Affordability is a Major Concern in the Market:

The high cost of these commodities is broken into several components, including the costs of technologies like sequencing and microarrays, recurring consumable expenses, and the cost of data extraction, storage, and analysis.

Further, Pharmacogenomic medicines, unlike traditional therapies that are provided through pharmacies, do not have a well-established distribution network. The PGx-related treatments faced a setback of reimbursement that may make the prohibitive. It is predominantly because the overall cost of genome sequencing and sequence analysis is declining. Thus within the current decade, we estimate that the market products to be more affordable and cost-effective.

In addition, PGx confronts competition from established pharmaceutical companies, the lack of a "blockbuster medicine" to stimulate investment in research and development, and a lack of cost-effectiveness studies that may encourage product acceptance and public and private reimbursement.

Economics of the Global Pharmacogenomics Market

The genomics market is currently valued at dollars 20.2 billion and is expected to expand approximately 15.37% per year until 2020. Market analysts predict that the Genomics Market is worth two trillion dollars.

However, within the healthcare and biopharmaceutical sectors themselves, there are huge opportunities in the market to be explored.

There are significant movements and developments from market leaders such as

However, there are 100+ players in the global market with numerous developments. For instance, in June 2020, Illumina acquired BlueBee to accelerate the processing, analysis, and sharing of next-generation sequencing data at scale.

On Aug 16, 2021, Today HealthTrust – provided benefit plans exclusively for New Hampshire public sector employees, retirees, and their families launched. The organization collaborated with precision medicine leader Coriell Life Sciences (CLS), the organization is rolling out CLS' Corigen Medication Safety Program, which uses the science of pharmacogenomics to assess how each person will respond to medications and improve how drugs are prescribed.

It is an exciting time for Research & Development in Life Sciences. R&D in Life Sciences is at an all-time high. However, there is still the need to address the challenge that the industry needs to resolve of cost affordability. Also, having mentioned that it is worth considering that potential trial genomics is a step forward, but should be supplemented by clinical and lifestyle data, supported by data analytics to achieve pattern recognition, diagnostic technologies like MICROARRAYS.