Pharmaceutical & biotechnology companies are capturing the largest market share, growing at a CAGR of 10.8% in the forecast period

End user segment is divided into pharmaceutical & biotechnology companies, academic institutes, research laboratory and others. In the past few years, the market has witnessed an increase in the number of research & development activities in gene therapy for developing novel drugs for the treatment of cancer, cardiovascular diseases, metabolic diseases, lysosome storage diseases, and impaired metabolic pathways. In addition, more than 60% of the pipeline-based gene therapy molecules were tested for oncological treatments in 2018. In addition, in 2018, ‘Lonza Group Ltd’ launched a new manufacturing facility in the U.S. to increase its production capacity for viral gene and virally modified cell therapy products. ‘Brammer Bio’ also opened a new manufacturing facility for clinical and commercial gene therapy in Cambridge, MA, the U.S in 2017.

Asia Pacific is the fastest growing gene therapy market across the globe. In 2011, only 13 gene therapy trials were conducted in Asia Pacific, out of which 1 was approved by China. After 2011, out of 104 trials, more than half of gene therapies were introduced to the regional market, out of which over 36% were launched during 2014–2015. Many countries in the region are investing heavily in gene therapy research activities. For instance, Singapore government is planning to invest USD 80 million in gene therapy research & development activities, clinical trials, and manufacturing. Moreover, Indonesia, Malaysia, and Thailand have also introduced regulations to attract investors for gene therapy R&D program, which, in turn, will increase the demand for gene therapy cell culture market in the region. 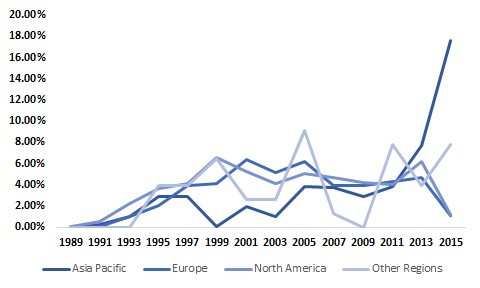 The market consists of a number of players such as HiMedia Ltd, Thermofischer Scientific, Lonza, Sartorius AG, R&D Systems, Inc, (Bio-Techne), GE Healthcare, Fujifilm Irvine Scientific and others. As analysed, HiMedia Ltd, Thermofischer Scientific, and Sartorious AG are leading the market in terms of market penetration. The key factors attributing to this are their broad portfolio of culture media specific to gene therapy and a greater number of geographic markets served by these key manufacturers. Players such as HiMedia, also focuses on competitive pricing to further increase the market penetration. A notable strategy to enhance the product portfolio, is being undertaken by Thermo Fisher Scientific. The company has acquired BD’s advanced bioprocessing business consisting of cell culture media, feeds, and supplements. This acquisition is expected to further augment company’s position in the market.