Gen Z and millennials are the two demographics dictating novel trends in the food and beverage (F&B) sector. These populations typically lead sedentary lives and are gradually becomingdiet conscious, shifting the focus to low sugar and low-fat foods. Over the last few decades, the preference hasswitched to organic foods, which has led to the emergence of several startups in the food processing market engaged in low fat, organic foods.

Online retail has increased product visibility, making it easier for new products to grabbing customer attention. In contrast, the increase in consumer income has led to an upsurge in purchasing power. Today, consumers seek information on the ingredients used in a product and from where it was procured. This need for supply chain and ingredient transparencyhas compelled manufacturers in the F&B industry to look for alternative raw material sources. Further, emerging startups catering to changing consumer preferences have nudged prominent businesses to form a more agile business model. Companies have started partnering with other manufacturers and retailers to capture a larger market share in segments such as energy drinks, organic juice, etc.

In almost all countries, authorities regulate food handling, processing, distribution, and packaging, and players in the F&B industry need to adjust their manufacturing and distribution practices as per the regional regulations. The constant need for product innovation, consistently evolving manufacturing practices, and the changing landscape are some of the challenges the sector will have to face in the years to come.

The F&B industry includes, but is not limited to, three primary components — processing, packaging, and commercial foodservice, which involves catering and food chains, among others. These sub-sectors significantly invest in research and technology to reduce production downtime through innovation. The integration of IoT and AI will be among the most visible modifications in the equipment used in the industry.

Companies that directly cater to the customer (D2C) are implementing operational models that aid in faster payment methods at the point of sale (PoS). On the other hand, companies that manufacture fast-moving consumer goods (FMCG), such as chocolates, milk, and ice-creams, are highly active on social media and involved in brand engagement and creating viral tweets and hashtags to generate higher brand awareness. Operation modification and social media engagement are among the primary factors influencing the growth of players operating in the sector.

The suggestions and recommendations provided as a part of our solutions have helped companies streamline their operations and, in the case of food service providers and food and beverage equipment manufacturers, optimize production processes.

As an example, a client of ours was unable to identify the declining sales of its maple syrup product. We provided the company with a research report on the Maple Syrup Market, which covered the many dynamics of consumer behavior and the packaging styles adopted by other competitors. Our report helped the company revamp its product packaging and other aspects, which eventually resulted in better brand recall and a 27% increase in sales.

In another instance, a company in the Food Sterilization Market sought to increase its penetration in new markets. After understanding their goals and challenges, we provided a research solution that identified the dominant segments that were expected to register the highest growth. With the help of this information, our client was able to allocate funds appropriately in R&D and various marketing campaigns, which led to increased penetration in new regional markets.

The coronavirus pandemic has been wreaking havoc for quite some time now. The virus, which, as per current data and sources, originated from the wet markets of Wuhan, China, has been responsible for disrupting entire value chains of various sectors. The emergencies, lockdowns, and curfews that have been imposed by various governments on their citizens will also affect consumer behavior to a certain extent.

Global Situation before the COVID 19

Global economies were already prepping for recession. However, the global pandemic has brought in an urgent need for a policy re-think across various sectors. The world had witnessed protectionist policies taking the form of a trade war between two of the world's largest trading partners, the U.S., and China. This triggered a price war, dumping of goods, and forming of new trade alliances. At the beginning of 2020, Brexit was finally brought to reality, and the U.K. was separated from the European Union (EU). This deal separated the largest trading partner of a trading union, which was, in recent times, in dire need of an uplift. Amidst all of this, a pandemic that has brought all of the global tradings to a halt has pushed the global economy towards recession combined with a sense of paranoia.

Many countries were swift in imposing lockdowns, which triggered panic buying among consumers. People were seen hoarding food and other essential grocery items, prompting business owners to modify their supply chain. For instance, restaurants have been closed down to promote social distancing, thereby the demand for frozen potatoes, per se, for making fries has declined from restaurants. However, home cooking has sustained the demand for frozen potatoes. These trends have caused various businesses to rejig their supply chains to cater to the same product's needs from a different end-user.

Pandemic during the Rice Season has Affected Various Economies Severely.

The pandemic has severely impacted the availability of food grains. Earlier, food grain shortages were controlled, and disruptions in the supply chain were artificially engineered by hoarding to control prices. However, in a pandemic, this hoarding is the result of a global lockdown and suspension of daily trading activities. Rice is a staple food of all the prominent economies in South Asia, and April and May's end is the season where rice is cultivated. Rice-growing economies are gripped in this pandemic, and all the available supplies will be primarily used to fulfill the demands. Notable food producers, such as India, the Philippines, Indonesia, and Vietnam, have banned the export of food items from ensuring adequate local supply. Besides, most agriculture and food handling activities are not automatic and rely heavily on the workforce. The closing of borders has forced migrant workers to go back to their homes, which is likely to give rise to a labor crisis and affect the F&B supply chain and the cultivation of crops requiringthe workforce for agriculture.

Africa to Suffer, Whereas Dubai to Remain Unaffected due to its Robust Food Distribution System

Africa is one of the biggest importers of rice from Asia. As mentioned earlier, rice forms an integral part of the staple diet in Asian economies, and a shortfall of this commodity will affect Africa to a great extent. However, there will be some economies which will not be as severely affected. For instance, Dubai is a global logistics hub, and many foreign goods pass from this region, so it has set a robust distribution system that ensures the availability of products. Moreover, the population in several prominent Middle East economies come from diverse cultural background, offering an array of food and beverage options which is in stark contrast to an economy such as the U.K. where consumers will only buy a specific product.

The consumer behavior in this region also contradicts the consumer behavior in Asia. In most Asian economies, consumers choose online platforms for 'killing time,’ while in the Middle East, e-commerce is used only for convenience. However, with e-commerce now increasingly being used for convenience in Asia, businesses focus on bringing the Middle East population to linger more on the various e-commerce platforms. For instance, in the UAE, El Grocer, an e-commerce business catering to grocery demands, has involved food influencers and incorporated different food recipes to evolve user experiences.

The demand for non-perishable food has gone up during the pandemic, owing to the stringent rules regarding the practicing of social distancing. The need for packaged food has increased and holds a significant share as it is safe from viral infections. Baby care food is another segment anticipated to rise in the following months if the spread of the pandemic continues to increase.

Post-pandemic, the world will witness a considerable increase in the demand for food delivery services. The assurance of better hygiene and the convenience of food delivery are among the prominent factors driving this market segment's growth. Luxury hotels and restaurants are now changing their modus operandi by changing their menus. This will include preparing only the food items which are essential and can be adjusted quickly. Many hotels that were not on any delivery platforms have been registering on foodservice platforms. Social dining was being touted as the next big thing in the foodservice industry, especially in emerging economies where the urban middle class was willing to spend a considerable amount on dining out. However, the practice of social distancing and the habits formed during these times are likely to prevail in the long run, affecting the social dining scenario in the developing economies. For instance, one of India's worst-affected sectors will be the food services industry, which is estimated to be around USD 55.38 billion and employs over 700,000 people, the National Restaurant Association of India.

Until now, food delivery services were preferred over dining out on account of the deep discounts, fast delivery promise, and free combos. The trend of deep discounting and free combos is now likely to take a backseat as consumers will prefer getting hygienic and safe foodat premium pricing. Foodservice operators are expected to change their business models to address the rising demand from household customers. Hotels and restaurants are also expected to deliver fresh and specialist items such as pickles, bread, eggs, and other food items, which were, until now, restricted to supermarkets and hypermarkets. A trend of delivering prepped ingredient boxes to the customers, which contain recipes for customers to cook food, is also anticipated to gain traction. Other patterns,such as meal plans and prepaid subscriptions, will also come into effect. These trends will help keep the food services market intact while retaining consumers hooked on order habits by giving them experience-based dining in theirhomes.

The Role of Potato Starch in Treating the Virus

The demand for F&B will also see a disruption in the supply chain as it will also be transported to some of the research institutes for research and development purposes. For instance, researchers from the West, the Middle East, and Asia are trialing potato resistant starch, and omega-3 honey in an attempt to find products which will aid in contributing towards the fight against coronavirus and its symptoms. There are clinical trials in Spain and the U.S. studying the role of resistant potato starch and micronutrients to reduce the rates of hospitalization of patients and improve the recovery time of those who are not hospitalized. However, companies are also shutting down operations, restricting the availability of food and beverages in the market. For instance, in April 2020, Smithfield Foods announced an indefinite shutdown of its facility in South Dakota, the U.S.

In uncertain times like these, economies will either develop a plan to open borders to facilitate the transport of essential commodities or are likely to stack up food grain supplies to fulfill internal demands. However, regardless of these scenarios, national and international authorities should temporarily uplift trade sanctions from all economies for food and beverage to minimize economic losses to the agriculture workers. An Insight into the Widespread Coffee Capsules Ind 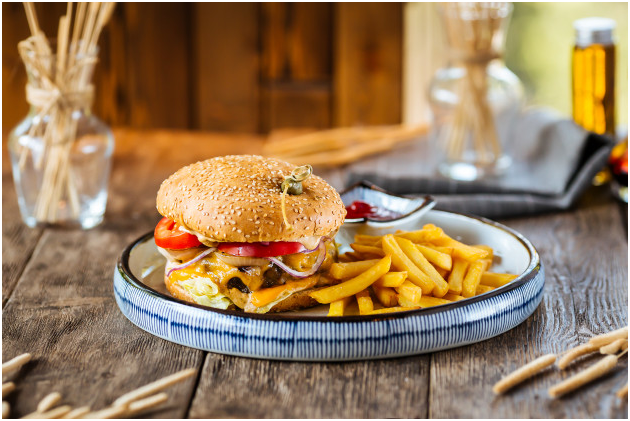 Plant-Based Meat: A Delicious Way to Be A Part of

Coffee capsules are ready-to-use sachets that make preparing a single cup of coffee easier. Since they are single-use items, they do not lose aroma, flavor, or intensity once opened. Coffee capsules simplify the process by allowing you to insert the preferred flavor capsule into the machine and pres

Plant-Based Meat: A Delicious Way to Be A Part of Growing Veganism