Pacemaker is a small electric device, which helps in controlling heartbeat by sending an electric impulse. It is implanted under patient’s chest by cardiologist to deal with various indications. Cardiovascular diseases (CVDs) are most common in India and affects thousands of people every year. Diverse dietary habits across the country, aging population, air pollution, high blood pressure, and increasing smoking habit are the major factors contributing to the increasing prevalence of CVDs in the region.

Cardiovascular diseases are posing a high economic burden as most of the patient are required to implant permanent pacemaker in India. Some of the North Indian States, for instance, Punjab, and the South Indian states including Kerala are more susceptible to these diseases due to unhealthy food habits and heavy diets. 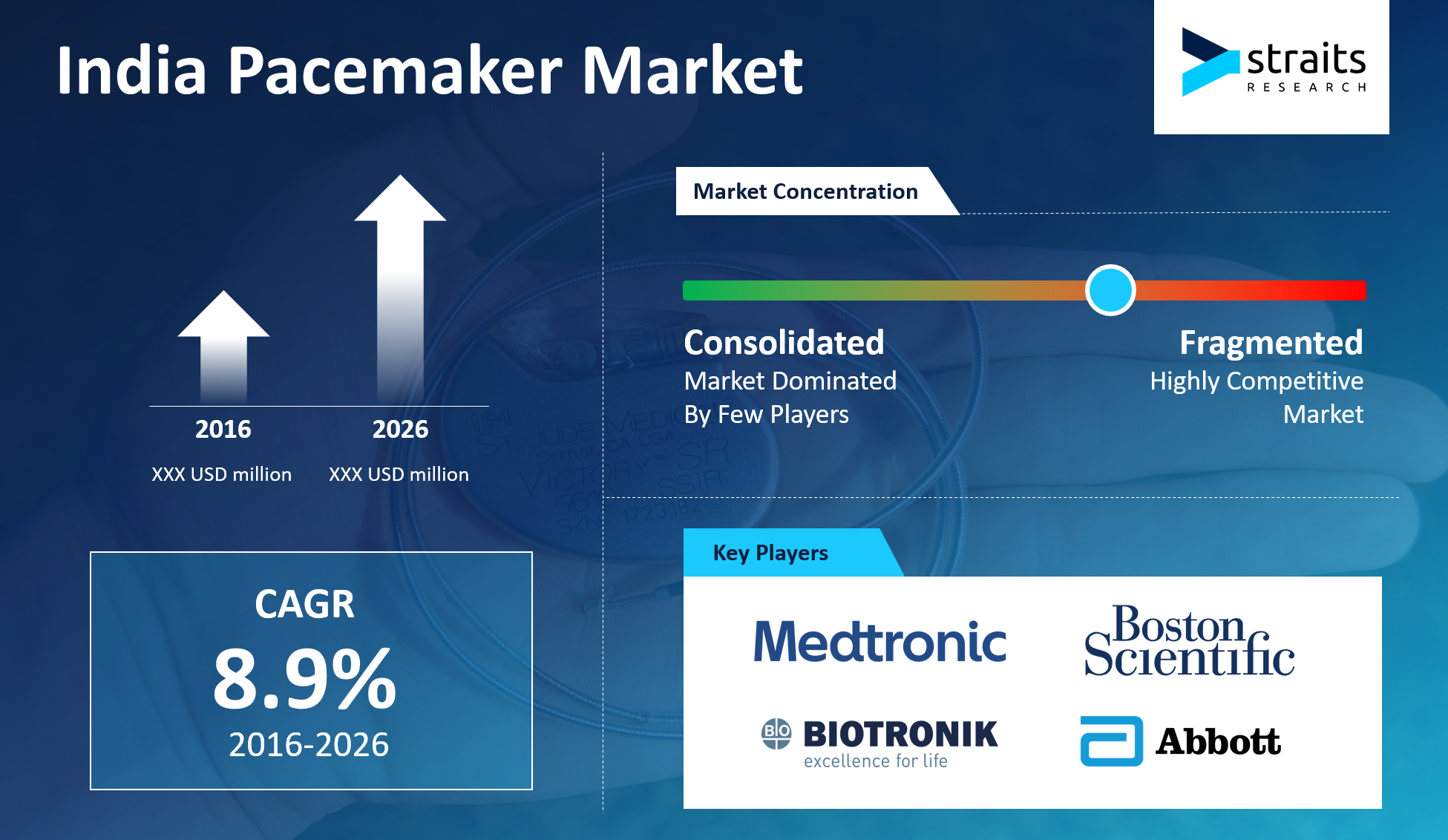 Based on product type, the market is segmented into implantable pacemaker and external pacemaker. Implantable pacemaker is highly preferred due to the presence of multiple leads as it can reduce the postoperative complications to some extent. Cardiovascular diseases like heart failure and cardiac arrhythmias are the most prevalent among the Indian population. Lack of exercise, poor diet, and smoking are some of the major factors leading to CVDs. It is the standard procedure to treat bradyarrhythmia’s. Advancement in the treatment of heart failure has increased the use of implantable pacemakers, cardioverter defibrillators, and CRTs, as they provide permanent solutions for chronic heart conditions External Pacemaker, is connected to the heart through wires. Electric signals cause the heart to beat in a regular pattern. It is commonly placed in a small pouch attached to the patient’s gown or secured arm. The device is used in case of emergency and for short time pacing (less than 1 week) hence used less frequently. These are beneficial in case of sudden change in heart rate, heart attack, infection, medication or other issues.

Based on technology, the market is segmented into single chambered, dual chambered, and three lead pacemaker. Single chambered segment is expected account for major share among technology. Bradycardia is the most common indication among cardiovascular diseases and requires single chamber pacemaker for the proper functioning of the heart. Hypertension causes bradyarrhythmia more frequently. Increasing stress in young population is one of the factors responsible for surging cases of heart diseases. Dual chambered segment is expected to account for optimum share of technology. It comprises two wires, one is attached to the atrium and other to the ventricle. It helps the two chambers in contracting and relaxing properly as well as facilitate proper blood flow. Three Lead Pacemaker consist of three wires attached to the right atrium, right ventricle, and left ventricle. Patients with heart failure require a biventricular pacemaker to coordinate the contractions of the ventricles because the left and right ventricles could not pump at the same time in this case.

Based on region, India pacemaker market is segmented into South, West, East, and North regions.

India is a country having 1.3 billion people with different cultures and lifestyles. High systolic blood pressure, air pollution, cholesterol, fasting plasma glucose, high BMI, and smoking population are some of the major contributors to the increasing prevalence of various cardiovascular diseases. Increasing cases of cardiovascular disease have increased the number of surgeries in the country. A survey on cardiac implantable electronic devices in India was conducted by Indian Society of Electro cardiology and Indian Heart Rhythm Society in 2016 included permanent pacemakers (PM), intracardiac defibrillators (ICD), and cardiac resynchronization therapy pacemaker devices in India to define trends in CIED implantations.

Cardiovascular diseases and Ischemic heart disease & stroke accounted for 28.1% and 61.4% of total deaths respectively. Furthermore, it was found that the cases of cardiovascular diseases increased in India from 25·7 million in 1990 to 54·5 million in 2016 and their prevalence was highest in Kerala, Punjab, and Tamil Nadu, followed by Andhra Pradesh, Himachal Pradesh, Maharashtra, Goa, and West Bengal. However, the government has launched many programs to reduce the burden of these diseases. For instance, in 2010, the National Program for Prevention and Control of Cancer, Diabetes, Cardiovascular Diseases and Stroke (NPCDCS) was launched to prevent and control disease burden. Implementation of these efforts across the states of India need more time for achieving national and global targets. Recently, the Indian government has introduced ‘Ayushman Bhart, a National Health Protection Mission. This program offers a health insurance to cover 500 million people from poor and weak families in India to reduce economic pressure on individuals.

How much is the India Pacemaker Market Worth in the future?

Which is the leading segment in the Market?

Single Chambered segment is expected to be the leading segment in the Market during the forecast period.