Internet of Things (IoT) has prompted a revolutionary transformation in the current digital era by creating an interconnected environment. IoT imparts efficiency to the working environment, primarily due to enhanced asset utilization using sensors and connectivity, which in turn helps the organization in gaining real-time insights. The rise in connected devices and adoption of cloud applications foster the growth and adoption of IoT. According to an analysis conducted by Cisco in 2015, around 50 billion devices will be connected through IoT globally by 2020.

IoT is witnessing rapid adoption in manufacturing, healthcare, and others, with adopters seeking efficiency enhancements, which is contributing to improvements in the overall economic scenario. According to ACT Organization, the global spending on IoT amounted to around USD 737 billion in 2016.

The widespread adoption of IoT has also induced security constraints as the technology increases the susceptibility of systems to data breaches and security errors. A study conducted by HP states that 70% of the commonly used IoT devices pose vulnerabilities. This scenario has created an imminent need for IoT security measures.

The past few years have seen key companies investing in big data technology and initiatives for combining data from multiple sources and generating meaningful insights; the key data sources include ERP systems and CRM. These systems primarily generate a vast amount of data, which in turn induces complexity in management. This has primarily resulted in the development of cloud-integrated IoT platforms. For instance, the Azure IoT platform is primarily adopted in applications such as transportation and logistics, discrete manufacturing, and energy. These sectors thus pose prospects for security solutions to effectively evade data theft and breaches. In 2016, SHAPESHIFT wiper malware attacked half a dozen Saudi Arabian organizations, including petrochemical companies. It also attempted to wipe out computer data at Saudi Aramco and RasGas in 2012, 2016, and 2017. 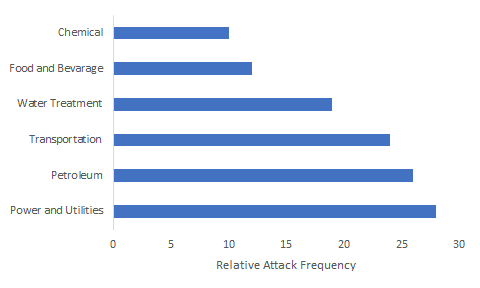 The global IoT security market can be segmented by solution, type, and application. Based on solution, the market can be segmented into analytics, encryption, identity and access management, threat management and others. The identity and access management segment holds a prominent market share, primarily due to the implementation of effective Identity Access Management (IAM) strategies. The scenario is backed by the increasing occurrence of data breaches caused by stolen or weak passwords. For instance, according to research conducted by OpenText Corp in 2018, 80% of data breaches are mainly due to poor identity management strategies. Thus, growth in the number of IoT devices creates a need for comprehensive Identity Access Management Platform and solutions.

Based on type, the market can be segmented into cloud, endpoint, network, application, and others. Endpoint based security measures primarily dominate the market, owing to colossal growth in the number of IoT devices. The widespread adoption of IoT devices in various commercial applications has presented cybercriminals with a lucrative target to exploit. IoT attacks totaled to about 6,000 incidents in 2016 and grew to 50,000 incidents in 2017 – recording over seven-fold growth in a year. The prominent IoT-based attacks originated from China (21%), followed by the U.S. (11%), Brazil (7%), and Russia (6%).

The higher penetration of IoT devices in countries such as South Korea, China, and Japan drives the growth of the IoT security market. The below data provides an overview of the top countries in this space, with the total number of IoT devices. 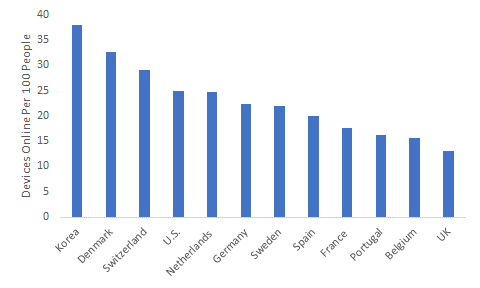 The new trend of hyper-connectivity, which entails the adoption of technologies such as IoT, cloud computing, big data, and mobile technology in the commercial sector, is presenting lucrative market opportunities. Additionally, favorable government policies promoting the incorporation of IoT in the manufacturing sector have generated around USD 85.96 million in revenue, accounting for about 15.4% in the overall IoT product groups. A similar scenario is observed in China, where the government has announced the ‘Made in China 2025’ initiative, which primarily aims to boost the manufacturing sector with the adoption of IoT, smart appliances, and other consumer electronics.

The adoption of strict privacy and security standards such as ‘IoT Security Standards’ by European government bodies to enhance baseline security for consumer-grade IoT products stands out as one of the primary factors driving market growth. TS 103 645, a new specification by the European Telecommunications Standards Institute (ETSI) makes it mandatory for manufacturing companies to maintain proper security measures in their products.

In June 2019, Cisco announced its decision of acquiring Sentryo, a company involved in real-time threat detection for Industrial IoT networks to expand its presence in the IoT security market.

Which is the leading segment in the IoT Security Market?

Endpoint Type Segment is expected to be the leading segment in IoT Security Market during the forecast period.

How much is the IoT Security Market worth in the future?

Who are the active players in IoT Security Market?

Which region is expected to hold the highest market share in the IoT Security Market?

What is the key factor driving IoT Security Market?

The rising adoption of strict privacy and security standards are the key factors expected to drive IoT Security Market during the forecast period.

What is the estimated period of growth predicted for the global IoT Security Market?

The global IoT Security Market will be estimated to grow from years 2017 to 2026.

What was the value of Global IoT Security Market in 2018?