Report Description
Regional Overview
Company Profiles
Buy Now
Mar 29, 2019   Global Statistics Representing Industrial Cybersecurity Market Scenario Security has become a significant aspect in the Industrial IT and operational technology, widespread connectivity of digital technology has increased the risk of cyber-attacks, which in turn results in extreme economic losses. The figure below depicts the major causes of cyber threats occurred in the year 2018. Some of the upcoming trends such as Industrial IoT are not only confined in the IT space, but also plays a major ...
Request Free Sample Report

Security has become a significant aspect in the Industrial IT and operational technology, widespread connectivity of digital technology has increased the risk of cyber-attacks, which in turn results in extreme economic losses. The figure below depicts the major causes of cyber threats occurred in the year 2018.

Some of the upcoming trends such as Industrial IoT are not only confined in the IT space, but also plays a major role within the operational technology in the industrial spaces, thus increasing security risks in the sector. The major segment with increased risk is smart energy, smart transportation and industry 4.0.

Global Industrial Cybersecurity market by Cloud security is estimated to emerge as fastest growing type with a total CAGR of 10.6% during the forecast period 2019-2025.

Increase in the number of cyberthreats across various commercial sectors is the major factor that is driving the market growth during the forecast period. Today, numerous activities are performed online such as big data analysis, social networks, information stored and managed through the internet, and online transactions, among others. This increased use of IT systems has increased risk of data privacy and information security. Moreover, with the advancing and growing number of new tools and techniques, cyber-crime is rising consistently. For instance,

Huge amount of data proliferation is considered a new way forward in ICT innovation and industry. Big data is gaining importance owing to proliferation of internet penetration, mobile devices, websites, social networks etc. This unprecedented amount of data is being created, shared and analyzed to transform information into knowledge for citizens, industry and government. As per the industry estimates, big data revenue is expected to reach $56 billion in 2020. Thus, pace with which data is generated, and its need to secure from vulnerability towards cyberattacks is likely to boost the market of cybersecurity solutions.

Global Industrial Cybersecurity market has been segmented majorly based on type, and end-users. Based on type, the market is segmented into network security, application security, endpoint security, wireless security, cloud security and others. Networks security holds major share, owing to increasing number of cyber-attacks has raised the importance of defending the industrial critical infrastructure networks in nuclear, chemical, oil and gas, and other sectors. For instance, according to the data released by the United States Computer Emergency Readiness Team (US-CERT), in 2015, the Russian hackers cyber-attacked on energy and other critical infrastructures. The details of the attacks include: Adoption of spear phishing, altering trade publication, and infecting staging targets such as trusted third-party suppliers to the energy sector. Accessing credentials of intended and victim’ network. 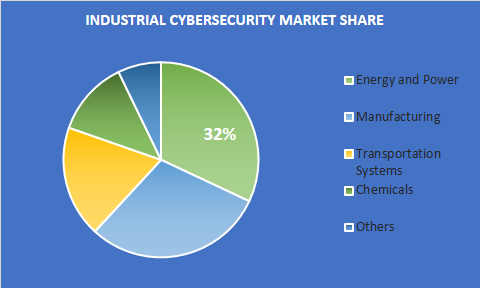 Cloud security is estimated to emerge as fastest growing type during the forecast period 2019-2026. The major reason at the back of this growth is the rising acceptance of cloud computing technology by small and medium enterprise. The increased adoption of this technology is due to flexibility concerning resource utilization, configurable computing resources, that includes databases, servers, software applications, computing power, and storage capacity.

Based on end-user, the market is segmented into energy and power, manufacturing, transportation systems, chemicals and others. Energy and power sector possess the major risk of cyber threats, thus holds the major share in the market during the forecast period. Increased digitization in the energy and power sector has offered many economic benefits such as greater efficiency in the rationalization of energy consumption, fast processing, and others. However, this has also increased the risk of cyber-attacks as malicious software are taking control of energy equipment and resulting in huge data theft. Data released by Australian Cyber Security Centre (ACSC) in 2016 estimated that between July 2015 and June 2016 about 14,804 cyber security incidents were reported, out of which 418 attacks were on systems of national interest (SNI) and critical infrastructure.

Get Your FREE Sample Copy of Industrial Cybersecurity

North America holds largest market share in the global industrial cybersecurity market, mainly due to Growing cyber threats are the harsh reality of present situations, which cannot be ignored. According to a survey conducted by Kaspersky Lab in 2018, around 77% of overall organizations in the world are focusing on the industrial cybersecurity issue and for 21% industries, cybersecurity is a minor concern. Various organizations in North America are facing challenges while implementing industrial cybersecurity risk management program due to increasing business fundamentals and demand for implementation of Industrial Internet of Things (IIoT) technologies. For instance, in 2014, Office of Personnel Management (OPM) of U.S. government was hacked, which exposed sensitive information database including personnel records and security-clearance files of at least 22 million people including federal employees and contractors of the U.S government.

European market is primarily influenced by strict laws and regulations to prevent the theft of data across the region, for instance EU General Data Protection Regulations primarily comprise of effective measures to avoid data misuse and theft. Furthermore, in 2013, the European Commission adopted the EU Cybersecurity Strategy for protecting the network and information security of the European government and organizations. Moreover, the European Commission has already invested more than €600 million in research and innovation cybersecurity projects for 2014–2020.

Asia Pacific is estimated to emerge as a fastest growing region, mainly due to rapid growth in digital connectivity coupled with inadequate awareness about cybersecurity. Thus, it is necessary for every organizations in the APAC region to take cyber-attacks seriously by administrating a comprehensive risk management framework and upgrading the capabilities for reducing cyber breaches to a minimal level. According to Mandiant (FireEye, Inc.) report, Asia based companies take 520 days on an average for identifying cyber breach, whereas rest of the world takes 146 days.

Most of the Middle East countries are functioning to defend themselves against cyber-attacks. For instance, Israel has established the National Cyber Bureau in 2010 for regulating the development of cyber Defense trend by expanding Unit 8200, which is responsible for collecting signal intelligence and code decryption. According to the UN Institute for Disarmament Research (UNIDIR) report in 2013, 114 national cybersecurity programs were present worldwide, of which few major roles were assigned to militaries of 47 countries. Iran is also building a cybersecurity force program through elite Revolutionary Guards Corps with an estimated cost of USD 1 billion. Moreover, after the start of civil war in Syria, the government has established the Syrian Electronic Army (SEA) cyber unit that includes number of internet hackers who support the Assad regime.

The report covers some additional points within the scope

Rest of SAMEA
By Type

Previous
Next
Global
By End User

Rest of SAMEA
By End User