Coffee has been one of the most favored hot beverages in the world. It is made out of coffee beans which are mainly of two types, Arabica and Robusta. There are other types of coffee beans as well but with not much production compared to these two. Coffee beans have anti-oxidants and caffeine that p...
Buy Report
Request Free Sample Report
Reports: Coffee Beans Market: Information by Type (Arabica, Robusta, Others), End-User (Pharmaceuti
Speak To Analyst
Request For Customization

Coffee has been one of the most favored hot beverages in the world. It is made out of coffee beans which are mainly of two types, Arabica and Robusta. There are other types of coffee beans as well but with not much production compared to these two. Coffee beans have anti-oxidants and caffeine that provide anti-inflammatory properties. They are beneficial in fighting certain diseases and also in boosting energy and mood. The health benefits of coffee beans have resulted in their use in end-use industries such as pharmaceuticals, food and beverage, and personal care and cosmetics.

The coffee market is well-established in the world. However, the coffee bean market still has the potential for promising growth during the forecast period. As processing technologies advance and modernize, coffee production is expected to reach newer heights in the forecast period. The market for pharmaceuticals and cosmetics is expected to remain consistent over the course.

The popularity of coffee can be evident from the amount of consumption happening over the years. The market has been brimming with different varieties of coffee. Producers are trying out different techniques to cultivate coffee while companies are using technology and consumer research to bring newer products to the market. The promising demand in food and beverage holds a dominant market share has led coffee producers to grow more, hence boosting the market growth.

Coffee consumption plays an integral role in the day-to-day life of a working individual. The purpose of coffee consumption varies from individual to individual, some of which include — to feel more alert, feel less tired, and socialize with colleagues in the workplace. In light of the fact, the consumption of coffee is further associated with improving productivity. Owing to this, today’s working-class has turned dependent on coffee in order to perform at their best in multiple facets of their hectic lives.

Changing weather conditions and worsening droughts on account of rising temperatures, minimum rainfall, and the lack of adequate irrigation systems have affected the coffee plantations across the various regions, particularly Brazil, which is also one of the largest producers of coffee. This has led to predicted degradation of the coffee plants – as the plants are yellow and damaged, and the beans are ruined. Owing to this, a large number of farmers engaged in the coffee plantation business have lost the majority of their crops and suffered losses. Due to which they are now willing to shift their crop focus from coffee to other crops as coffee plantation requires a significant amount of water. Prominent exporters of coffee are witnessing the fall in the production capacity, thereby resulting in the disruption of the demand and the supply chain across the globe market. Hence, leading to volatile raw material prices.

In recent years, the growth of e-commerce platforms has allowed individual entrepreneurs engaged in the coffee business to expand their business at a rapid pace both across the domestic as well as overseas markets. This business expansion model has proven to be of great help for players with low capital investment and who are unable to gain access to the supplier and distribution channels of the market that are already been captured by players with extensive industry experience.

This business model has been most effective across the Asia-Pacific market, where buying and selling over digital networks and internet penetration rate has grown rapidly lately. It is further expected that the technology advances and new technologies—AI, IoT, 5G, and machine learning (ML)—will further help in shaping the e-commerce business environment. Furthermore, as e-commerce platforms strengthen across the economies, particularly developing ones, it will aid players engaged in the coffee business to fortify and expand their businesses.

Coffee is majorly produced in developing economies such as Brazil, Ethiopia, Colombia, Vietnam, and India. Following 2015-16, the global production has always been higher than the demand, which has kept the coffee prices in control. The value chain of the market is somewhat similar across all the producing countries in the world. Producing countries are more focused on cultivation and the initial processing that is required for exporting.

Consuming countries have developed their factories and coffee houses domestically, where the final packaging along with roasting, cooling, blending, and grinding is carried out. This is expected to change in the coming years as developing economies are looking to increase their revenue by increasing value in their produce locally. Multi-national financial institutions such as the World Bank, IMF, and ICO are offering advice and loans for these countries keeping in mind the sustainability issues coffee production has.

Climate change, pollution, and other environmental factors such as deforestation, pesticide pollution, habitat destruction, soil, and water degradation are the cause of concern and can hamper the global coffee bean market growth in coming years. These institutions are working on a model based on people, planet, profit, and governance to keep the coffee business viable.

The coffee beans market has over the years has diversified itself to venture into newer applications in pharmaceutical and cosmetics. The pharmaceutical and the cosmetics industry have been able to sell health benefits such as anti-inflammatory and antioxidant to the consumers. The caffeine in the coffee is used to improve mental alertness, used in combination with painkillers, and in treating migraine headaches. The cosmetics industry has been using coffee as an antioxidant to boost collagen levels to reduce premature aging of cells. Coffee is also used in cosmetics in acne-fighting scrub. The coffee beans market is expected to get a boost as demand in pharmaceutical and cosmetics applications continue to increase.

The coffee market traditionally was mainly in Europe (Germany, Italy, France), U.S., and Japan. According to the International Coffee Organization (ICO), Brazil has been at the forefront of production with 22,000 (thousand 60 kg bags) followed by Indonesia, Ethiopia, and the Philippines exporting 4,800, 3700, and 3,300 respectively for the 2019-20 year. Regional overview for the coffee beans markets ultimately depends on the coffee pricing as a large chunk of the revenue goes down to the products that have undergone processing. Due to the over-production of coffee, coffee prices have been decreasing, and COVID-19 somewhat accelerated it. 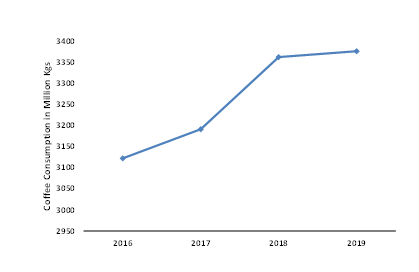 The increased variety of new products in the coffee market, such as ready-to-drink and instant coffee such as drip bag coffee, are attracting the younger generation to coffee as a beverage.

Additionally, the region also has one of the highest per capita coffee consumptions, which is attributed to the presence of inhabitants marked by higher income levels and consumer awareness, along with a more developed coffee culture than the rest of the world.

What is the key factor driving Coffee Beans Market?

Who are the active players in Coffee Beans Market?

Which region is expected to hold the highest market share in the Coffee Beans Market?

Europe is expected to hold the highest market share in Coffee Beans Market.

Which is the leading segment in the Coffee Beans Market?

Pharmaceutical and Cosmetics End-Users Segment is expected to be the leading segment in Coffee Beans Market during the forecast period.