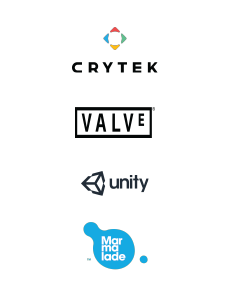 Games engine is the heart of a computer or a video game. The program is used to make video games for consoles, smartphones, and desktops. Game developers utilize 2D or 3D game engine software to plan and build games swiftly. Other aspects of game engines include scripting and memory management.

Introduction of Advanced Technologies to Boost the Demand for Games Engine

The games engine market is driven by advances in technologies like Augmented Reality (AR) and Virtual Reality (VR). Augmented and virtual reality technologies are changing how people watch movies and play video games. As current devices become more realistic, the necessity for game engines with more powerful capabilities and real-time capability grows. Gaming using augmented reality is a newer concept that is gaining popularity. Innovative technology allows game designers to make games that interact with the real world. Such advanced technologies are boosting demand for game engines in the market.

The gaming market is exploding. However, the expense of games engine software and hardware is a concern for the business. Most game engines require a high-end computer or console. Individual developers struggle to afford the costs as they demand more funding to bring their ideas and initiatives to life. Sales are often hampered by tough rivalry from competitors and changing client needs and tastes.  As a result, software vendors may invest less in research and development, making the industry less profitable for new enterprises.

The games engine market will rise as more individuals have access to faster internet and IoT technology. People currently prefer smartphones and browsers over television, making them more connected and encouraging them to play more games. In recent years, many technical advances in wireless telecommunications have enhanced network availability and performance.

This is especially true with the fast rise of mobile broadband networks and Wi-Fi technologies. Dedicated servers and online data storage facilities enable online multiplayer gaming over network hardware consoles or other local area networks. Cloud gaming has gained popularity in the gaming business. It is a huge trend among PC and smartphone players.

Cloud games will witness greater demand due to the development of 5G and internet access, contributing to the overall growth of the games engine market.

Even though the COVID-19 pandemic had only a little influence on the game engine business, consumers favored online games over offline games, resulting in a decline in demand for offline games, including video games. However, as the demand for online games has grown, several market participants have stepped up their efforts to advance gaming technology. New gaming goods are introduced to cater to the growing need for game engines among game creators. The games engine is primarily intended for use in creating video games.

It incorporates features like 3D graphics, scripting, sound, networking, streaming, artificial intelligence, memory management, and others into a single package. Additionally, dedicated servers and online data storage facilities are being used to improve online multiplayer gaming. Over time, cloud gaming has grown increasingly popular in the gaming business. It has also become huge popular among PC and mobile players alike in recent years.

Cloud games will experience a significant increase in demand during the anticipated period, contributing to the overall growth of the games engine market. Cloud games will see significant demand as 5G and internet access become more widely available. Businesses focusing on entering the market will find it quite profitable.

Mobile gaming revenue will expand by 14.25 % in 2030 to reach USD 3450 million. Mobile gaming devices are exploding due to their accessibility and cost. Games are played on TV/consoles, computers, and smartphones, according to Clairfield International. Mobile phones and tablets account for around 40% of the market. Mobile games, especially those featuring multiplayer, generate more money than portable games.

According to the GSMA, the number of smartphone users in North America will reach 328 million by 2025. Furthermore, by 2025, the area may experience an increase in global mobile user penetration (86%) and internet usage (80%). The region has the highest rate of smart device adoption. Since smartphones play such an important part in market development, the region has a lot of room for expansion over the projected period.

During the forecast period, the number of games engines in Europe increased steadily. Technological advancements have resulted in better graphics and more compelling game experiences, resulting in growth. Developing games that are compatible with popular game engines has helped a number of gaming businesses reduce production expenses.

Mobile Games Application Segment is expected to be the leading segment in the market during the forecast period.

At what CAGR is the market anticipated to grow over the forecast period (2017-2030)?

The market is anticipated to grow at a CAGR of 13.69% over the forecast period.

What is the estimated period of growth predicted for the market?

Which region is expected to hold the highest market share?

North America is expected to hold the highest market share.

Advancements in technologies like Augmented Reality (AR) and Virtual Reality (VR) are the key factors expected to drive the market during the forecast period.